Breaking the Silence: The Truth about Charlie Chaplin

The Real Charlie Chaplin presents a fascinating portrait of the film star, exploring how the actor and his on-screen persona became inseparable entities. By Ian Haydn Smith

There’s a moment, three quarters of the way through Peter Middleton and James Spinney’s documentary The Real Charlie Chaplin, when the writer-director-star’s present collides with his actual and cinematic pasts. In the 1960s, the ageing icon returned to London, visiting the Lambeth haunts he grew up in. It was not the first time he had been back there since he made his name in Hollywood. Following the release of his first feature The Kid (1921) – which came out when he was already a huge success thanks to his appearance in hundreds of shorts – Chaplin attended the film’s opening in London and headed to his old neighbourhood. But his return in the 1960s, shot in colour, is presented in a markedly different way in the documentary. Middleton and Spinney intercut it with excerpts from his films, reinforcing the link between Chaplin’s real and screen lives. In one instance, the attic room he grew up is contrasted with the space where his character lives in The Kid (1921). In another, Kennington Park resembles the location of his character’s first encounter with Virginia Cherrill’s blind flower girl in City Lights (1931). This archive footage reinforces the film’s assertion that to understand this troubled star, one needs to see Chaplin and his most famous creation, the Tramp, as a single entity.

Other archive footage, shot around the globe, shows that Chaplin was the world’s biggest star in the 1920s. Wherever he went, thousands turned out to see him. He wasn’t the medium’s first star. This was once credited to Florence Lawrence, but Max Linder is now regarded as being the first recognisable face on film. However, they both play an interesting role in how the notion of a star developed before Chaplin entered the scene. In the case of Lawrence, most audiences didn’t know her name, but came to recognise her through the many shorts she appeared in. That recognition, and a desire to see more of her, represented a key ingredient of stardom: audience demand. Carl Laemmle, a film impresario and founder of the recently formed Independent Moving Pictures Company, recognised this appeal and purchased Lawrence’s contract from Biograph Studios. No sooner was she signed to him than Laemmle spread a rumour among the press that Lawrence had been killed in an automobile accident in New York. Audiences now had a name to put to the face, alongside charged emotions over her demise. Laemmle then took out ads in newspapers announcing that Lawrence wasn’t in fact dead and could soon be seen in his upcoming picture The Broken Oath (1910). Not only was a star ‘born’, she emerged from a myth. Chaplin, perhaps more than most stars, also understood the power of myth-making in the creation of an on- and off-screen persona – a shield between the audience and his real self. 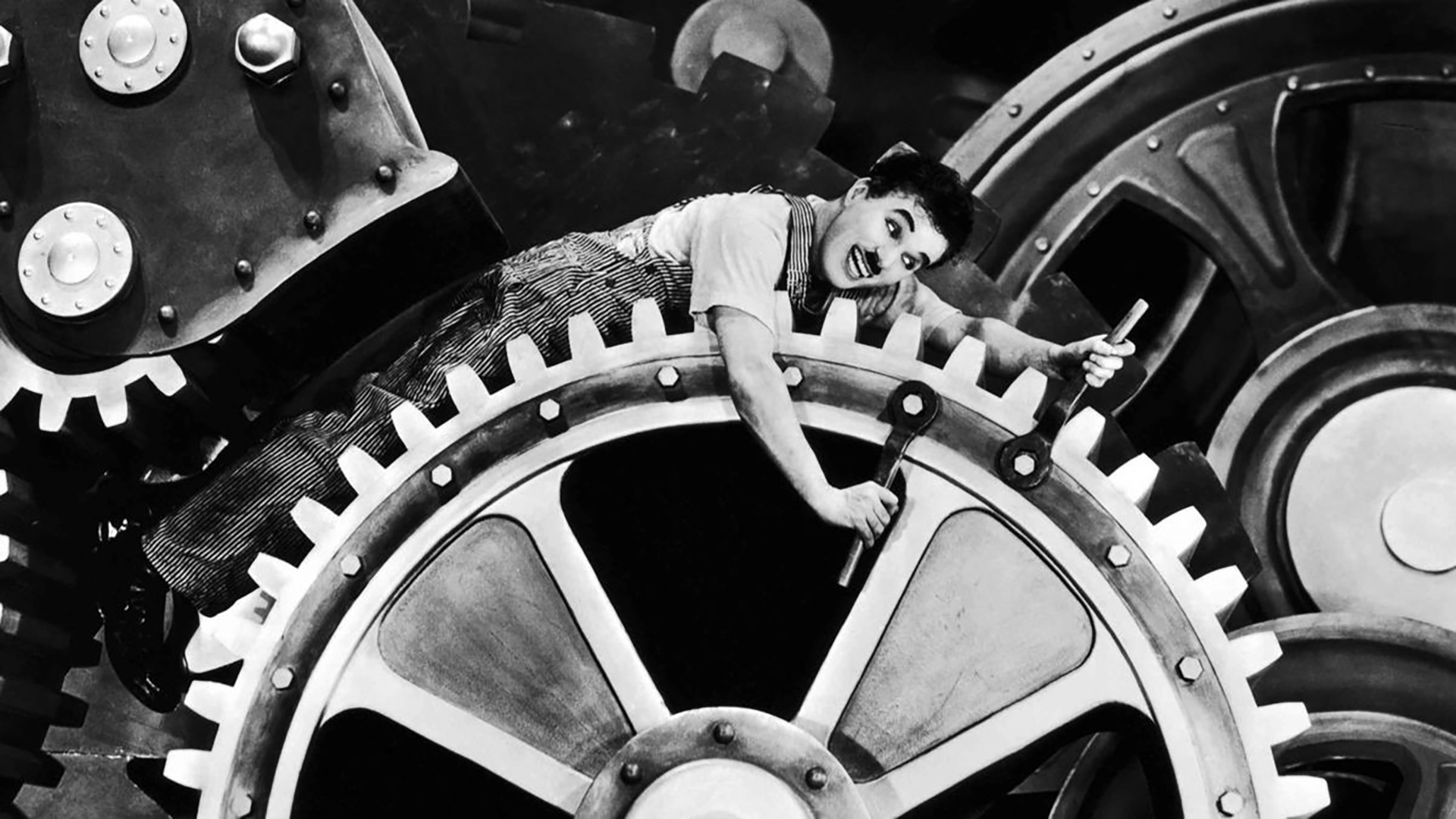 Max Linder’s career began around the same time as Lawrence (1905-6), but fame came earlier for him. He played a debonair, formally attired charmer – often using his own name. It’s unclear how much of an influence he had on his Hollywood counterparts, but the on-screen alter-ego he created set a template for subsequent comedy actors, from Chaplin, Buster Keaton and Harold Lloyd all the way through to Jacques Tati and, to a degree, Woody Allen. He was also a genius at slapstick. To watch his films is to see a variation on the character Chaplin subsequently created.

By the time Chaplin arrived in Hollywood, well-produced comedy was a sure-fire hit with audiences. (It’s also arguably the first genre. Of the 10 films the Lumière brothers screened to the first paying audience in 1895, one stood out for not being a record of everyday life. The Gardener, of The Sprinkler Sprinkled, was a crude early example of the effectiveness of slapstick on film.) And if you wanted to be in a comedy in Hollywood, you needed to be employed by producers Hal Roach or Mack Sennett. They were the gold standard of comedy at the time and if you were starting out it helped to be on contract to them. Middleton and Spinney make good use of early films to map out this world and detail how Chaplin made his way from abject poverty and a London workhouse via success on stage, all the way to the attention of Sennett, who offered him a role in his films. He played a number of roles before he honed in on his Tramp character. One of the highpoints of the documentary lies in seeing how Chaplin created the role and the individuals who claimed he lifted the tramp from their own repertoire of characters. His first film featuring the character was Mabel’s Strange Predicament (1914), a vehicle for comedy star Mabel Normand. But the next film Chaplin shot, Kid Auto Races at Venice (1914) ended up being the first that audiences saw.

That film is a perfect example of Chaplin’s appeal. His stare, through the camera to the audiences beyond, is so direct that it remains striking today. It’s a combination of showmanship, attention-seeking and something more personal – an intimacy that made Chaplin immediately likeable. In no time at all, he rose through the ranks to become a leading light in Hollywood. But, as Middleton and Spinney note, such adulation and success failed to assuage the demons that haunted him from his youth.

The Real Charlie Chaplin unravels the complex relationship between Chaplin and the Tramp – why he chose such a character. Moving through films like The Immigrant (1917), The Kid (1921), The Gold Rush (1925), City Lights (1931) and Modern Times (1936), it’s clear that Chaplin sought to present an everyman who suffered in the way many others did in the world; even with his fame and wealth, he sought to reassure his audience that he was always on the side of the underdog. Nowhere is this more apparent than in his climactic speech in The Great Dictator (1940), his first sound film. The speech proved so effective that Chaplin was invited to repeat it at the inauguration of President Roosevelt. But Chaplin didn’t stop there. He accepted invitations to speak and at some events, though not a Communist, he expressed sympathy with its ideological principles in equality and eradicating poverty. Anyone aware of his background would understand his reasoning, but it soon found him on a list of names at the FBI. Its director, J. Edgar Hoover, saw Chaplin as a danger to society and greenlit a campaign to undermine him. It soon became clear that Chaplin’s personal affairs gave them the ammunition they required.

At the midpoint of their film, Middleton and Spinney approach Chaplin’s personal relationships. Mildred Harris, Lita Grey, Paulette Goddard and Oona O’Neill were all in their late teens when Chaplin married them. (He remained with O’Neill until his death and although his relationship with her appears the happiest of the four, testimonies by their children paint a picture of a distanced and unemotional figure, only coming to life when a camera was trained on him.) The film doesn’t shy away from this aspect of Chaplin’s life. It’s clear that he was subject to cruel Communist-baiting by the FBI and US government. However, the means by which they turned many of Chaplin’s fans against him were, to a significant degree, due to the choices he made in his personal life.

The Real Charlie Chaplin uses staged sequences to accompany audio recordings (one of the loveliest being a conversation between film historian Kevin Brownlow and Effie Wisdom, who played on the streets with Chaplin in the 1890s) and beautifully narrated by Pearl Mackie. The documentary is less a study of a celebrated career than a fascinating portrait of an individual who courted success and controversy, whose celebrated fictional character helped mask its creator from public life. It doesn’t explain Chaplin’s behaviour, but suggests that what we see of him on the screen was formed long before he ever stepped in front of a camera.