Finding Connection in the Films of Chantal Akerman

As Jeanne Dielman takes up the mantle of Sight & Sound’s Greatest Film of All Time, Lillian Crawford considers how its filmmaker lingers on moments of stillness throughout her work, her static frames drawing us into the inner worlds of her female protagonists.

In Les rendez-vous d’Anna (1978), there’s an extended shot of Aurore Clément staring at the camera and smoking in a train carriage at night. Clément is playing a filmmaker called Anna Silver, a stand-in for the film’s Belgian director, Chantal Akerman. Her gaze meets ours directly and, in her absent expression, it is possible to project ourself into Anna’s body and mind. As the title states, she has many meetings, but it’s in these still moments when Akerman’s film comes to life.

The mid-shot of Anna on the train immediately follows one of two scenes with her mother (Lea Massari). Their relationship is a fascinating and close one – they even discuss their sex lives when naked in bed together. It’s an openness Anna doesn’t have with the men she sleeps with in the film, who feel cold in their rigidity, and she is only able to vocalise her love for a woman with her mother. Les rendez-vous d’Anna feels like an extension of Akerman’s most famous work, Jeanne Dielman, 23 quai du Commerce, 1080 Bruxelles (1975) – which recently topped the 2022 Sight & Sound poll as the Greatest Film of All Time – where men only repress women into silent passivity. 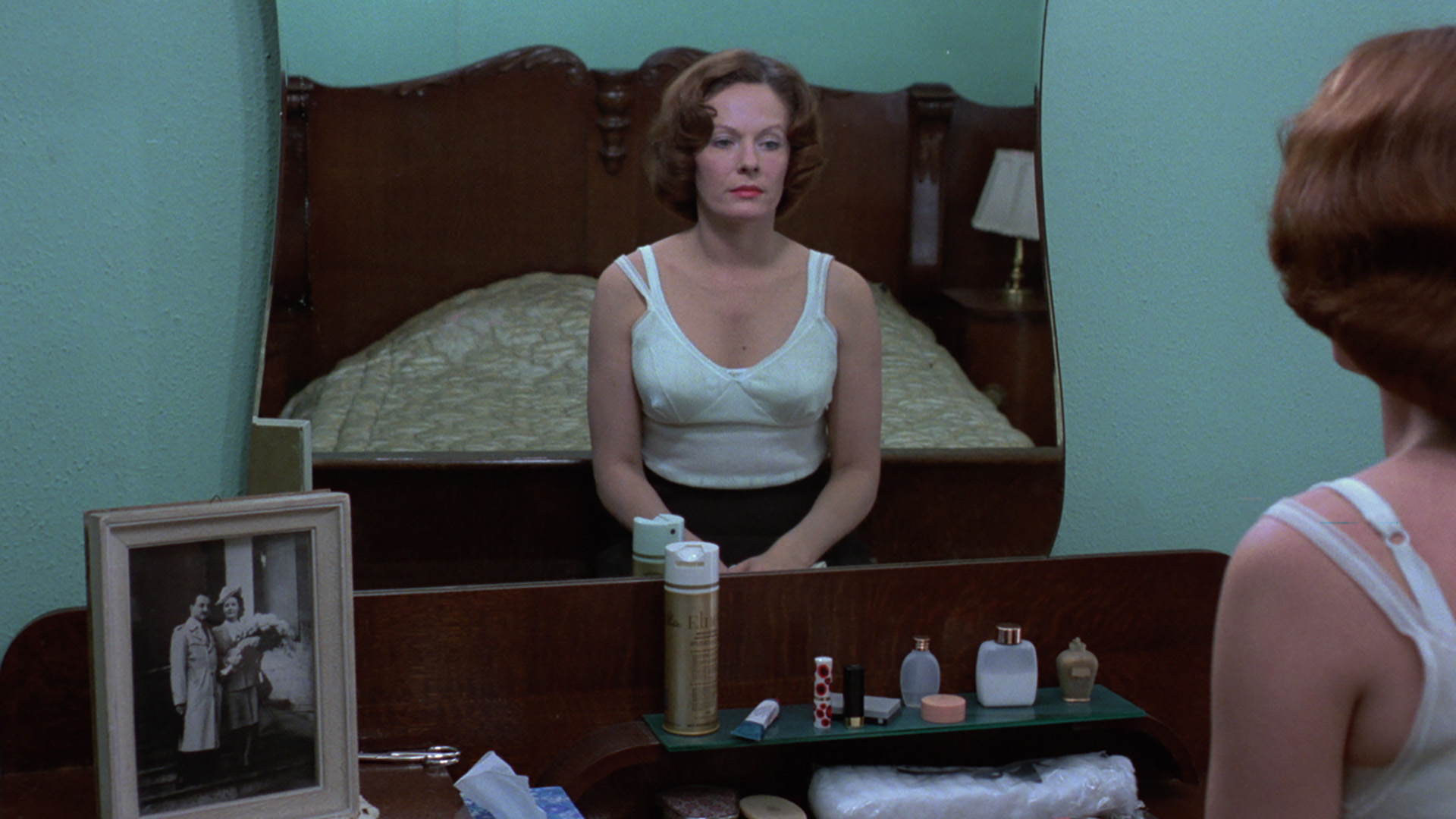 The two films play together in quiet dialogue, with Jeanne Dielman inspired by Akerman’s mother, Natalia, and Anna Silver by the filmmaker herself. Akerman gives time and space to the moments when women are alone, left with their own thoughts as they watch the world move around them. If Akerman’s filmography can be read as an extended letter to Natalia, then it is not one that flows easily and eloquently, but one complicated by miscommunication and simply not always knowing what to say. Then again, true comfort with another person can often mean being able to sit in silence without the need for words.

This disconnected connection comes when Akerman’s women appear to be looking at us. The camera functions as a one-way mirror, giving the audience a static frame through which to observe and pass judgement without granting those on screen the same position. Cinematographer Babette Mangolte, who worked with Akerman in the 1970s on films including Jeanne Dielman, described her framing as ‘totally static’ because she ‘thinks beforehand about how it is going to look’. Every frame is deliberate, and demands the same level of scrutiny as a painting. Even in the stillness – especially in the stillness – active viewership is required. 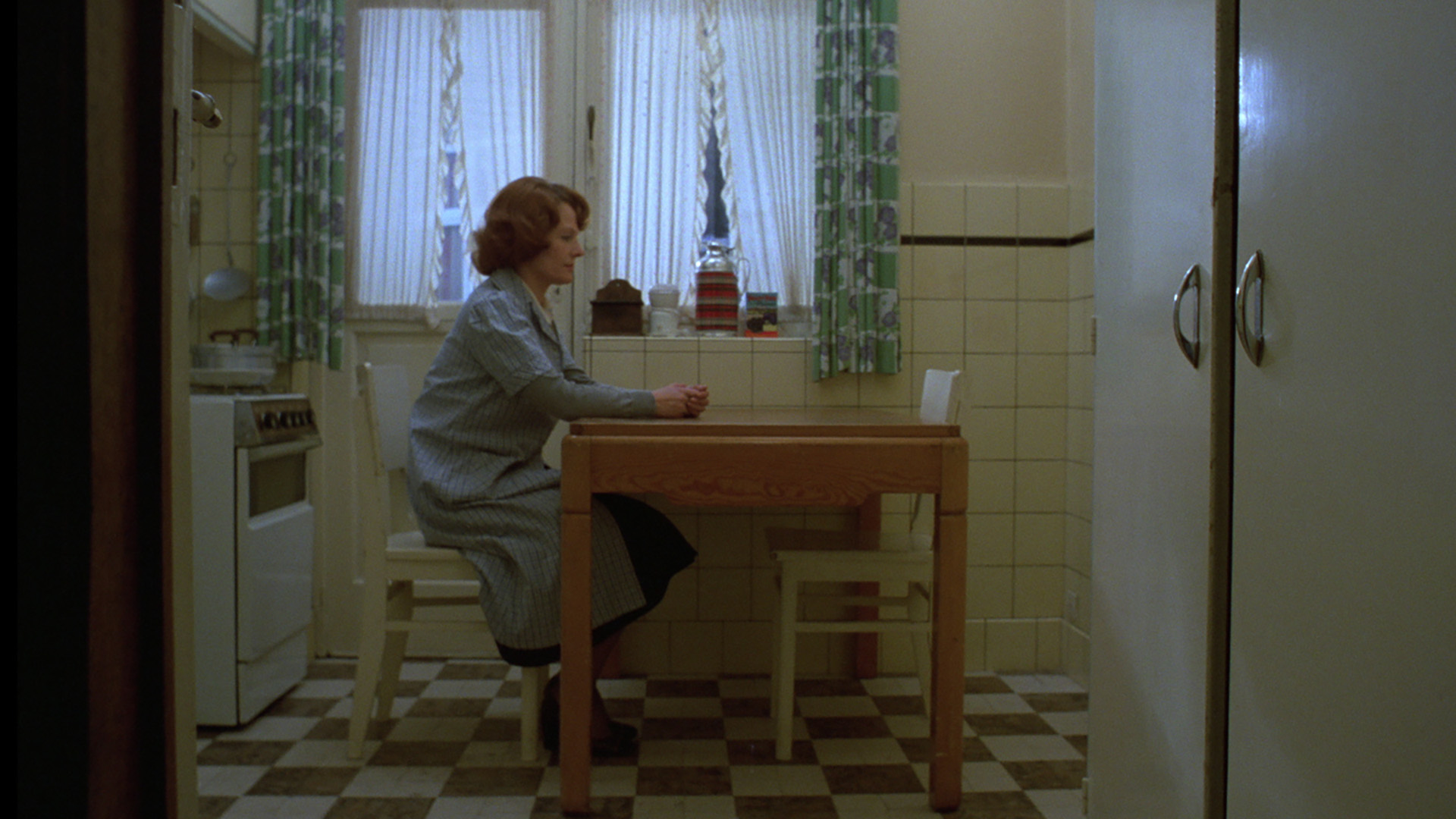 Mangolte also worked on News From Home (1977), a semi-documentary featuring fixed shots of New York City played under Akerman reading letters sent by Natalia from Belgium. The images are akin to the pillow shots of Yasujiro Ozu, in which every movement is made detectable by transforming background into foreground. Visually, News From Home is a film about New York – Mangolte cites Dziga Vertov’s Man With a Movie Camera (1929) as having the greatest impact on her career, which uses montage to capture the frantic rhythm of urban life. By contrast, Akerman’s documentary relishes in the stillness of city living, in the moments where there is a different sort of calm.

There are two versions of News From Home, one with Akerman reading her mother’s letters in English and another in French. They stand together as a bilingual representation of Akerman’s uncertain sense of place, with one foot in America and the other in Europe. When she reads her mother’s letters in French, they are her mother’s words in the language she had used; spoken in English, they have been mediated and thus altered. This form of translation is described by Jacques Derrida in The Ear of the Other (1985) as ‘otobiography’, wherein communication is ascribed meaning by the receiver rather than sender. Akerman reads the letters not in Brussels but in New York, grounding the mother’s words within the daughter’s surroundings. In doing so, Akerman effectively silences Natalia. 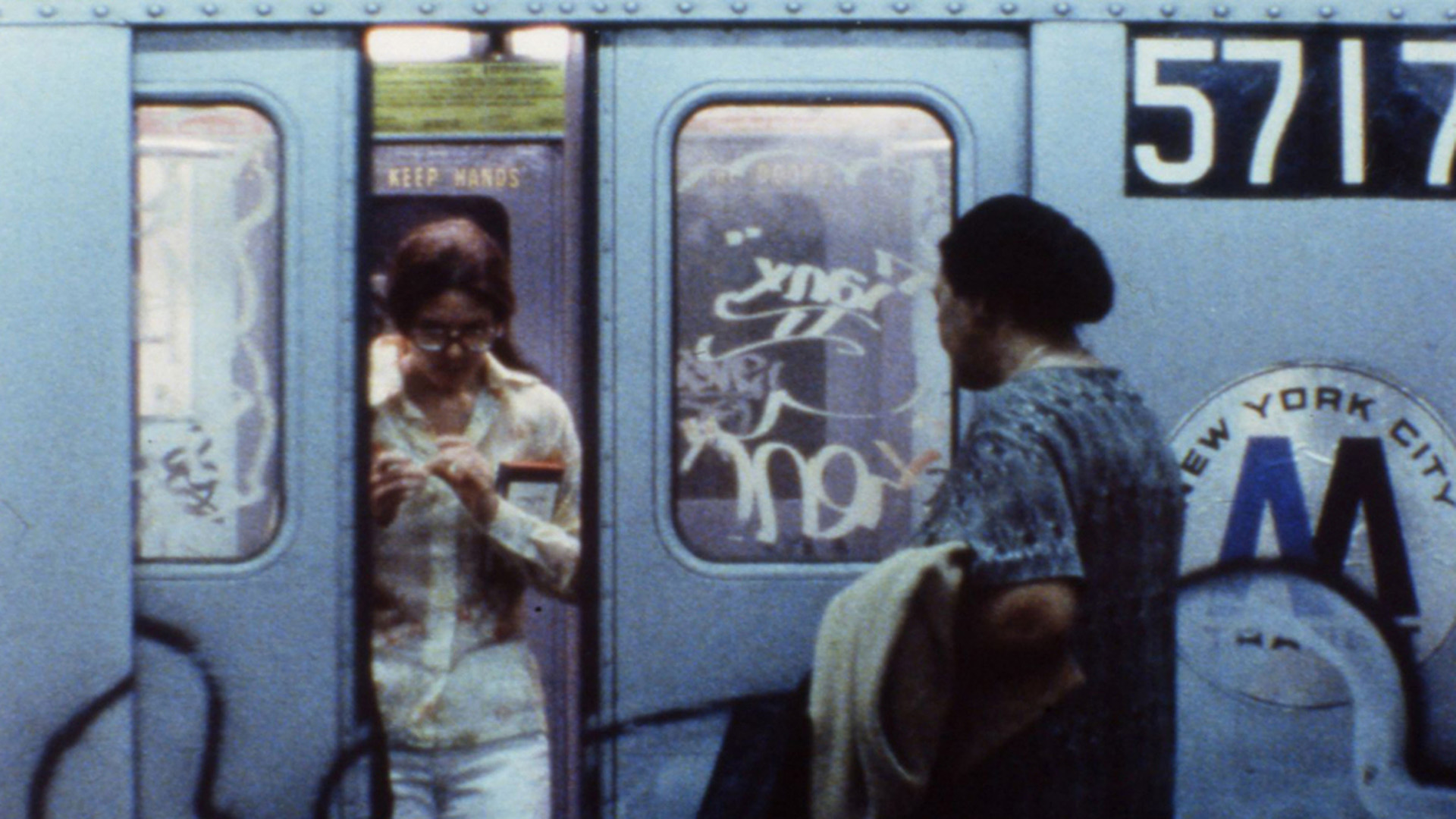 When Jeanne Dielman (Delphine Seyrig) receives a letter from her sister in Canada, she reads it to her son at the dinner table in unflinching monotone. We may gain a sense of the sister’s voice through her words, and her surroundings in the mind’s eye, but we perceive the communication as it is channelled through Jeanne in her Brussels apartment. Akerman filmed Seyrig reciting letters again in her 1986 film Letters Home, a recording of a play by Rose Leiman Goldemberg based on the missives Sylvia Plath sent her mother Aurelia. We see Seyrig and her niece Coralie reading Plath’s words, but they are spoken aloud in French, affecting their meaning. What we see and hear in Akerman’s films exists on multiple planes that move in and out of detachment.

In the final shot of News From Home, the camera is placed on the back of a boat as it sails away from New York. The skyline moves further from view, shrouded in mist, seeming to slowly disappear behind us. The narration goes silent, with Natalia complaining that ‘you never write how you’re really doing’. In 2015 Akerman made one last film, No Home Movie, in which she shoots her mother in her apartment and the conversations they share. It feels like a convergence of Anna Silver and Jeanne Dielman, albeit with letters replaced now by Skype video calls. Without the veil of fictionalisation, and the spatial displacement of News From Home, we simply watch their relationship for the first and last time. 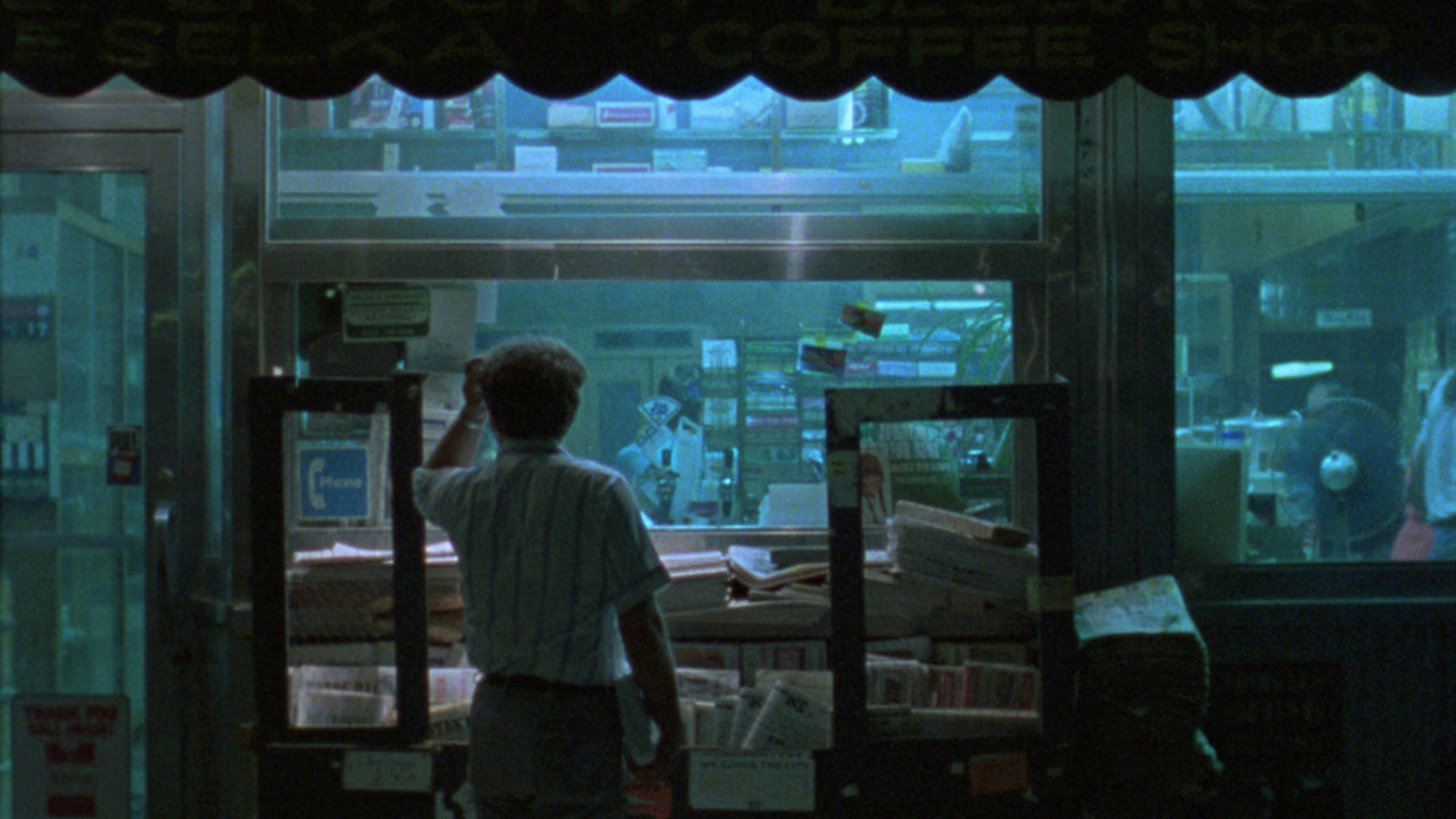 Considering Akerman’s work as a reflection of her communication with her mother is weighted with retrospective sadness. Not long after Natalia passed away, Akerman died by suicide on 5 October 2015 in Paris. We can project ourselves onto her characters, and read what we will into her silent observations, but there can be no pretence to knowing Akerman’s own mind. She moved between places all her life, and even in the apparent happiness of proximity to her mother, she felt lost. As Akerman wrote in her 2013 memoir My Mother Laughs, ‘I have an apartment. It’s my home. That’s what other people say, my home. But I don’t feel like I have a home or an elsewhere. There’s nowhere I feel at home.’