Il Buco Is Anything But Slow

Frammartino’s Il Buco details an expedition by a group of speleologists into a cave in the southern Italian region of Calabria in 1961. The nearest village is a small rural community located in a valley. Their access to the outside world is through a television located in one of the village’s squares, where the locals see footage of their country’s cities as they emerge from a period of economic stagnation and rapid construction. At the same time that the speleologists embark on their mission, an old shepherd reaches the end of his life. The frailty of his existence is pitted against the sense of wonder of the explorers – two sides of the same coin that sum up our journey through life. 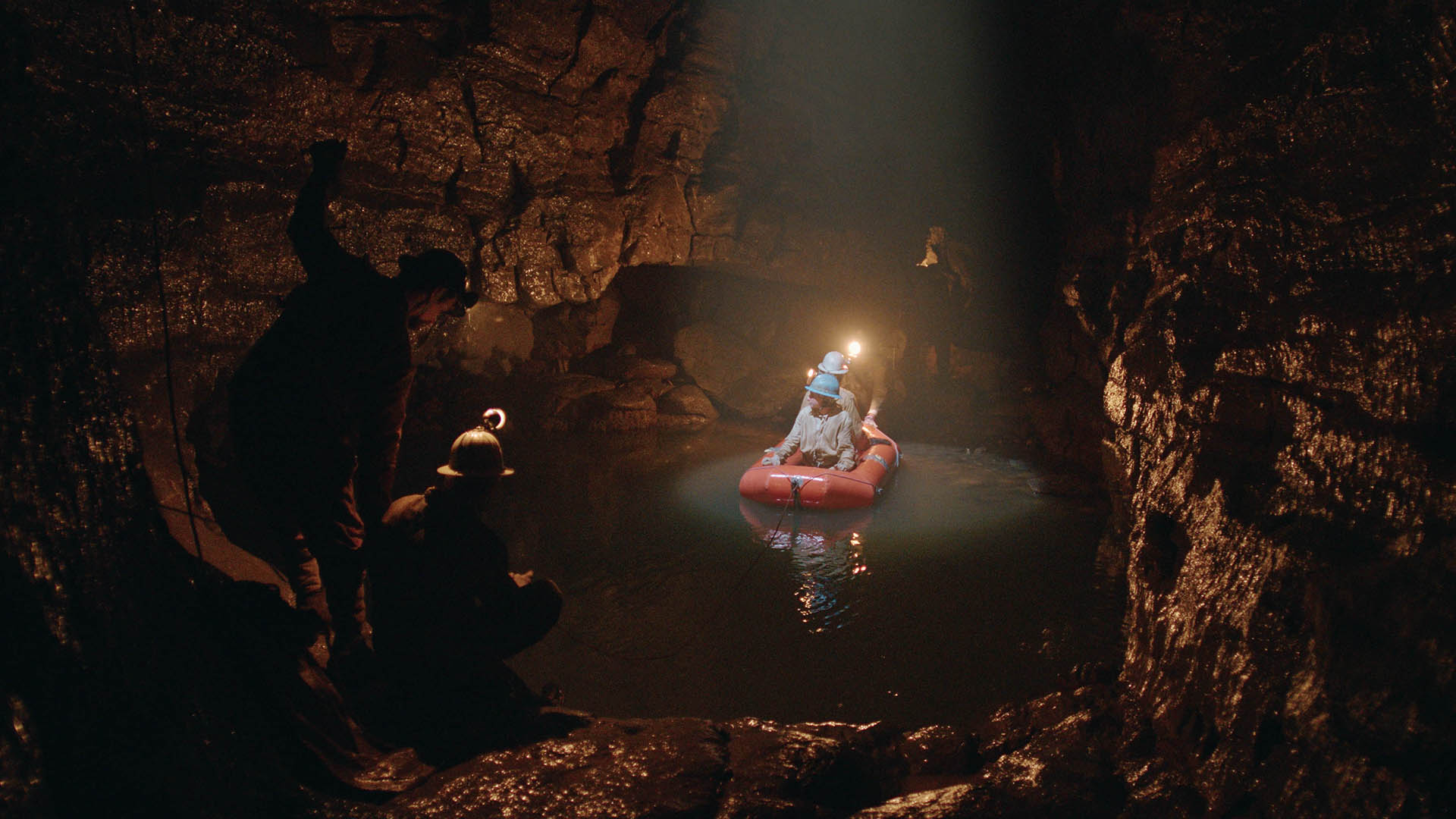 A film where dialogue is almost entirely absent, Il Buco is wilfully meditative. Such an approach places it within a category of films known as ‘slow cinema’. It’s a catch-all term applied to films whose pacing, narrative and experience distinguishes them from a mainstream cinema, which, like our digital lives, is often frenzied. However, as with any loosely defined term, it’s not always helpful; it can be seen as a derisory description of the films it represents or a celebration of its unwillingness to be hurried. But the ‘slowness’ that gives this term its name is not unique to these films. It exists across the spectrum of cinema and draws much of its power from earlier visual arts.

There are few images depicting the everyday that are as dramatic as John Constable’s Salisbury Cathedral from the Meadows. It shows the towering building from the north-west, with a view over the River Nadder, across which a team of three are pulling a cart. First exhibited in 1831 – although the artist would continue working on it until his death in 1837 – it is less famous than The Hay Wain (1821), but has come to be regarded as the pinnacle of Constable’s cycle of large landscapes. 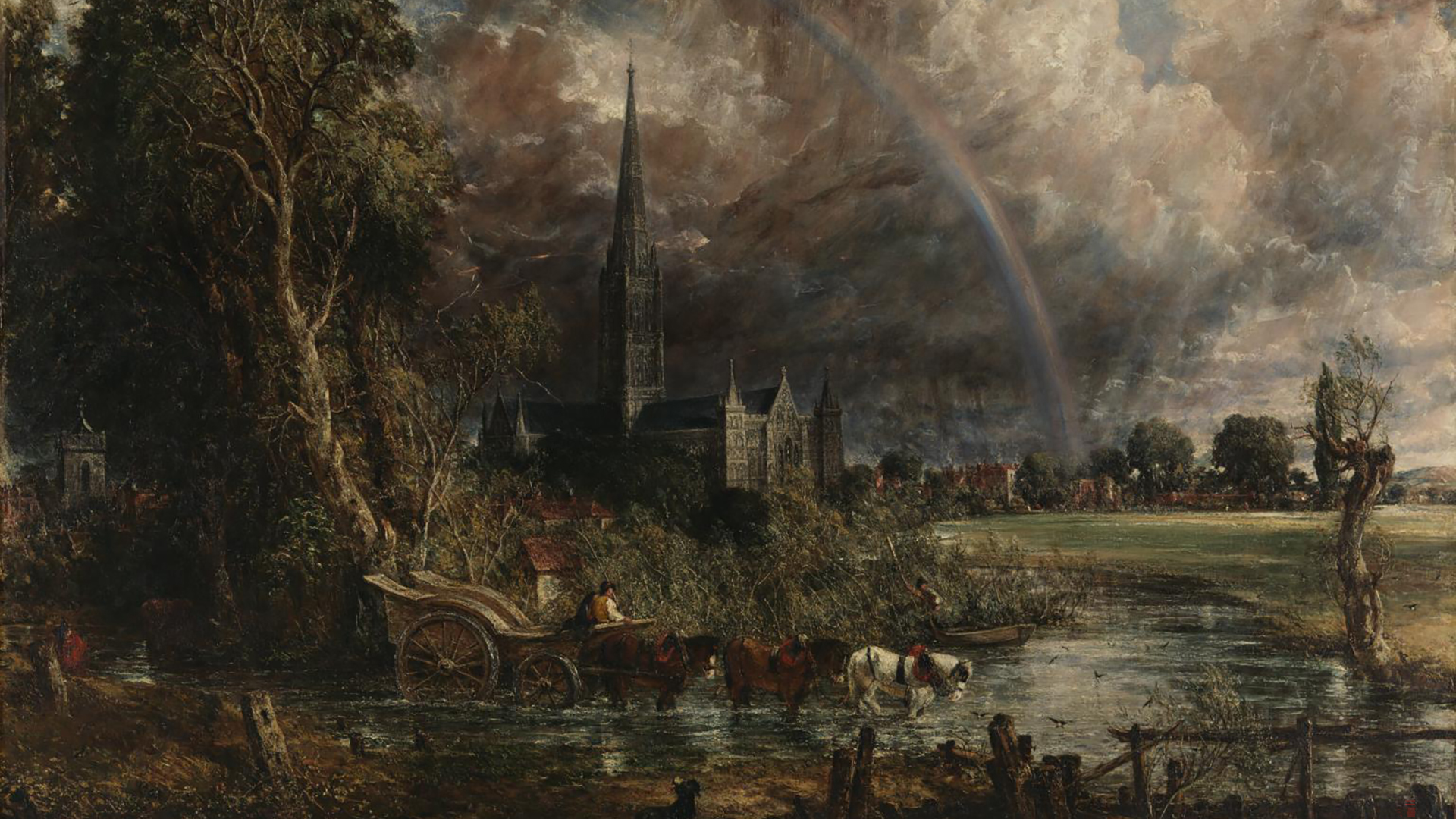 The painting normally hangs in a gallery in Tate Britain (it’s currently part of the ‘Constable and England: A History of His Affections’ at Luxembourg City’s Villa Vauban) and even the most cursory glances at it reveals not just the richness of Constable’s vision of this scene, but the drama unfolding within it. It depicts action and turbulence, but also hope. It’s not through movement that we glean this, but through the interaction of elements within the frame. A storm cloud looms ominously across the city’s skyline. But the presence of a rainbow suggests the worst may have passed. (Constable was grieving the loss of his first wife Maria during his work on the painting, and the house upon which the rainbow falls was the residence of Archdeacon John Fisher, a good friend who had helped see the artist through his bleakest days.)

Some seven years after Constable’s death, William Makepeace Thackeray published in The Luck of Barry Lyndon. A picaresque tale narrating the life and misfortune of a charming Irish rogue, it was adapted for the screen in 1975 by Stanley Kubrick. Barry Lyndon’s opening scene features a duel in which the hero’s father is fatally shot. If the subject matter would not likely have appealed to the staunchly Anglican Constable, the setting, with its perfect framing and rich palette would (it should be noted that Kubrick and cinematographer John Alcott perfectly capture the thistle purple of an early morning). The static shot lasts 32 seconds, with the action unfolding in the distance. This is not regarded as slow cinema. Just cinema.

Michelangelo Frammartino’s visually ravishing third feature, his first since his 2010 breakthrough Le Quattro Volte, opens with no less an enigmatic shot than Kubrick’s magisterial period drama. Dawn breaks over a cave hidden deep in the mountains of Calabria in southern Italy. Frammartino and cinematographer Renato Berta position their camera inside the cave’s entrance, looking out. As light pours into the cave, details become clear. Cows appear at the entrance, seemingly curious about what lies inside of the cave as we might be of what exists outside it. The shot lasts 95 seconds. Beyond its length, the shot is perfectly framed, just like Kubrick’s. Pure cinema. 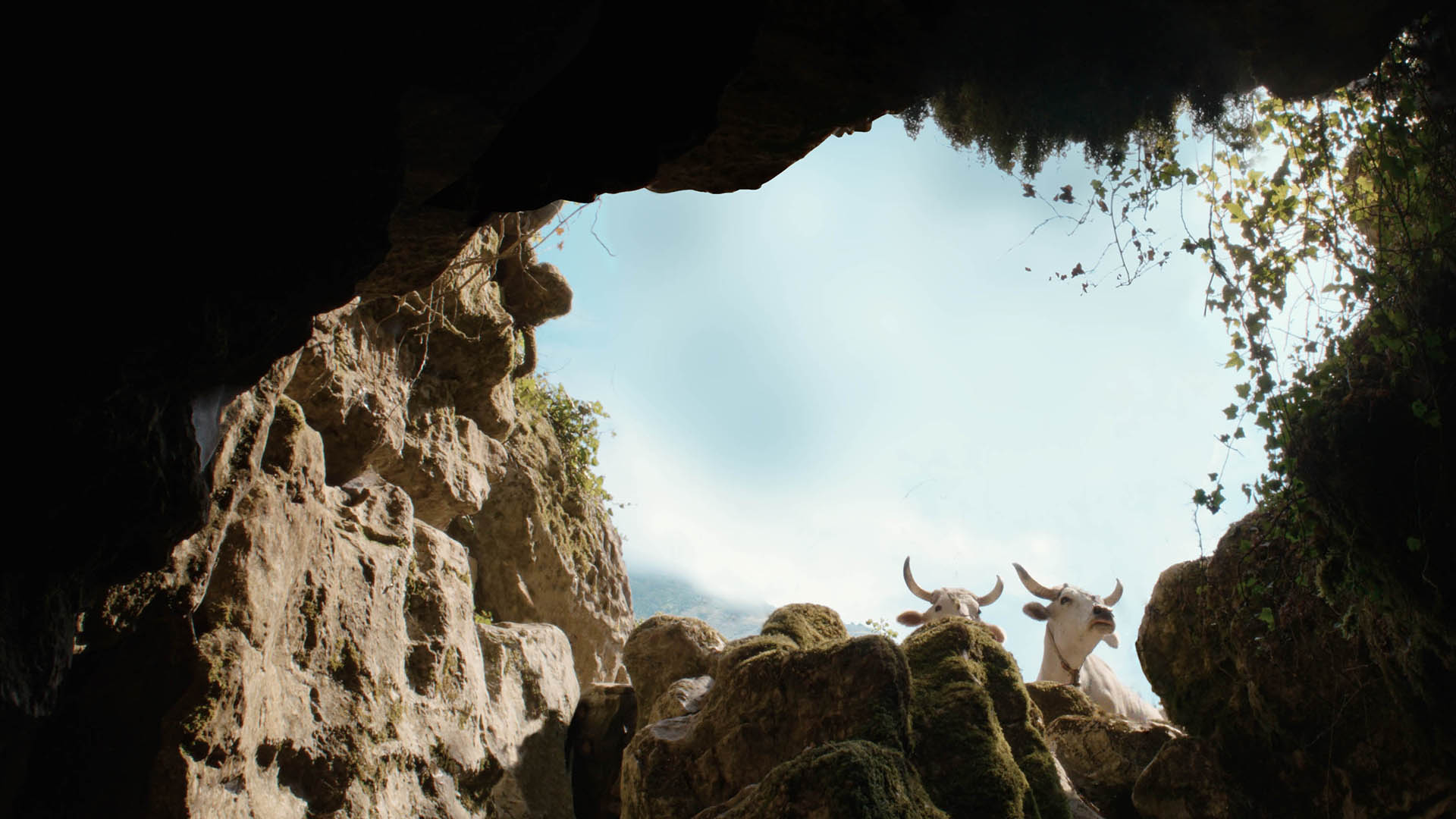 The subsequent film is driven less by a propulsive narrative than the rhythms of life in this rural idyll. We are immersed in this world. It’s this element – of enveloping us within a universe without heavy reliance on plot – that marks so many films that come under the banner of slow cinema, from the work of Chantal Akerman, Béla Tarr, Fred Keleman and Tsai Ming Liang to Roy Andersson, Jacqueline Zünd, Pedro Costa, Apichatpong Weerasethakul and Lav Diaz. There are also the films of Robert Bresson, Ingmar Bergman, Andrei Tarkovsky and Theo Angelopoulos, all regarded as progenitors of slow cinema. 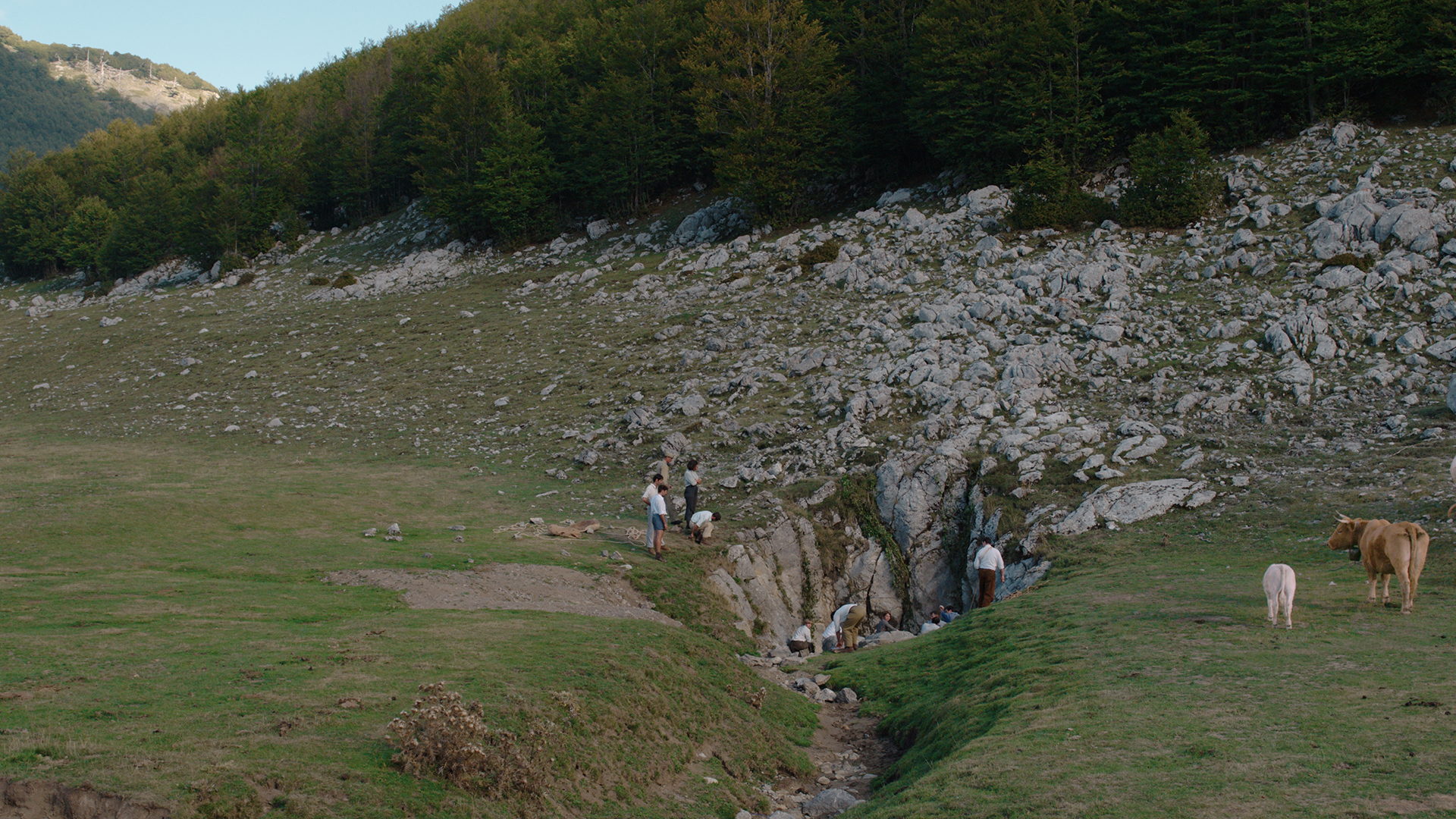 The only character we see in close proximity in Il Buco is the elderly shepherd whose life reaches its end. We see him alone on a mountainside, in the company of his friends, then in death. The first close-up of the shepherd, watching over his animals in the base of the valley far below, details the furrows in his face. Age and experience has not withered this man, it has shaped and defined him. It’s not dissimilar to Jane Bown’s impromptu shot of Samuel Beckett as he left the Royal Court Theatre in 1974. The creases of his face are reflected in the brickwork behind him, just as the knots and ridges of the tree next to the shepherd in Il Buco’s mirror the wrinkles on his face. Bown’s photo can be seen to regard Beckett as much as a part of the Royal Court’s foundations as the building itself; Frammartino, too, sees the shepherd as an inextricable element of the world he inhabits. (It’s an idea that the filmmaker took further in his previous film Le Quattro Volte, following the spirit of another ageing villager as it travels through animals, plants and minerals.) 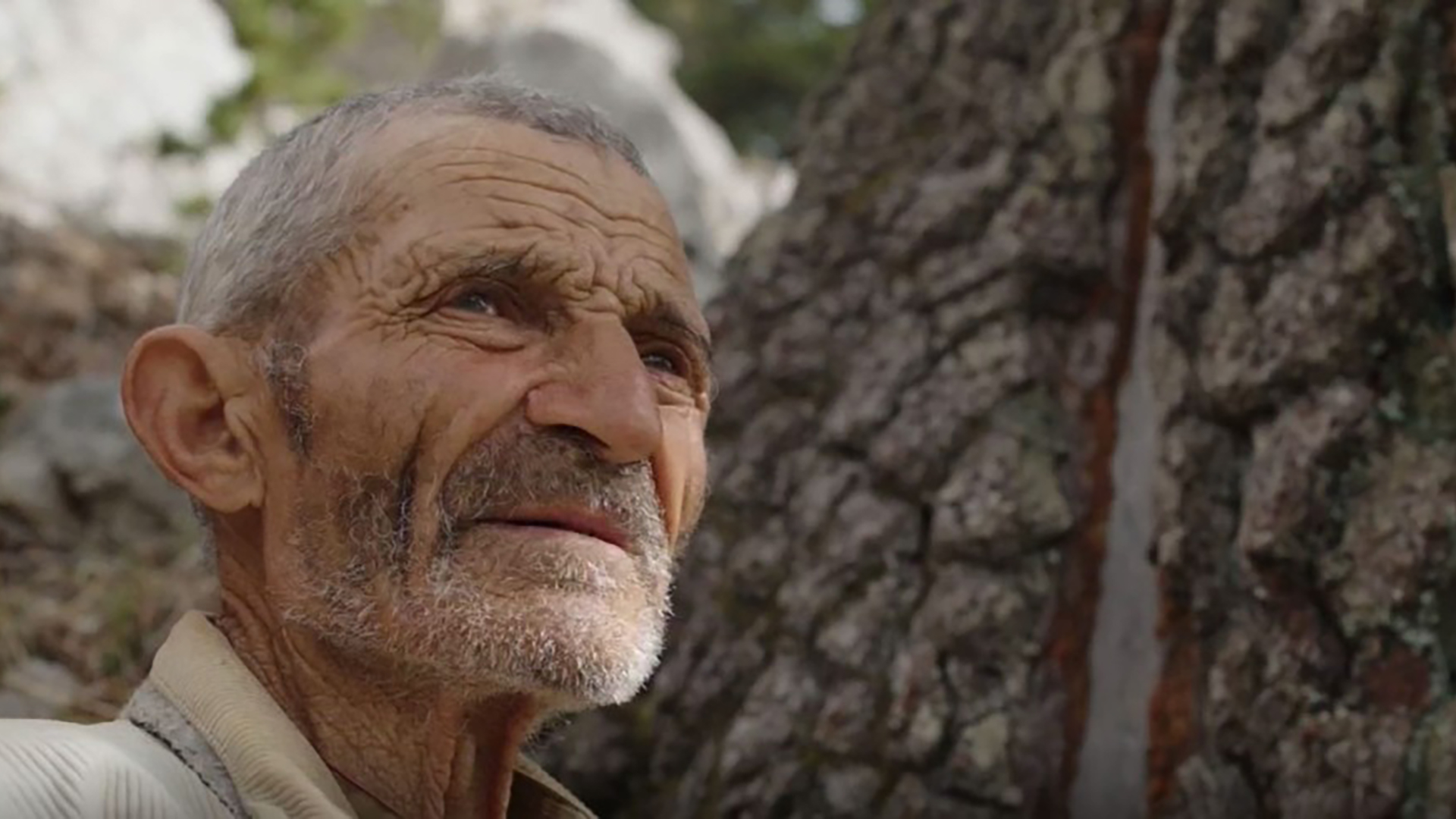 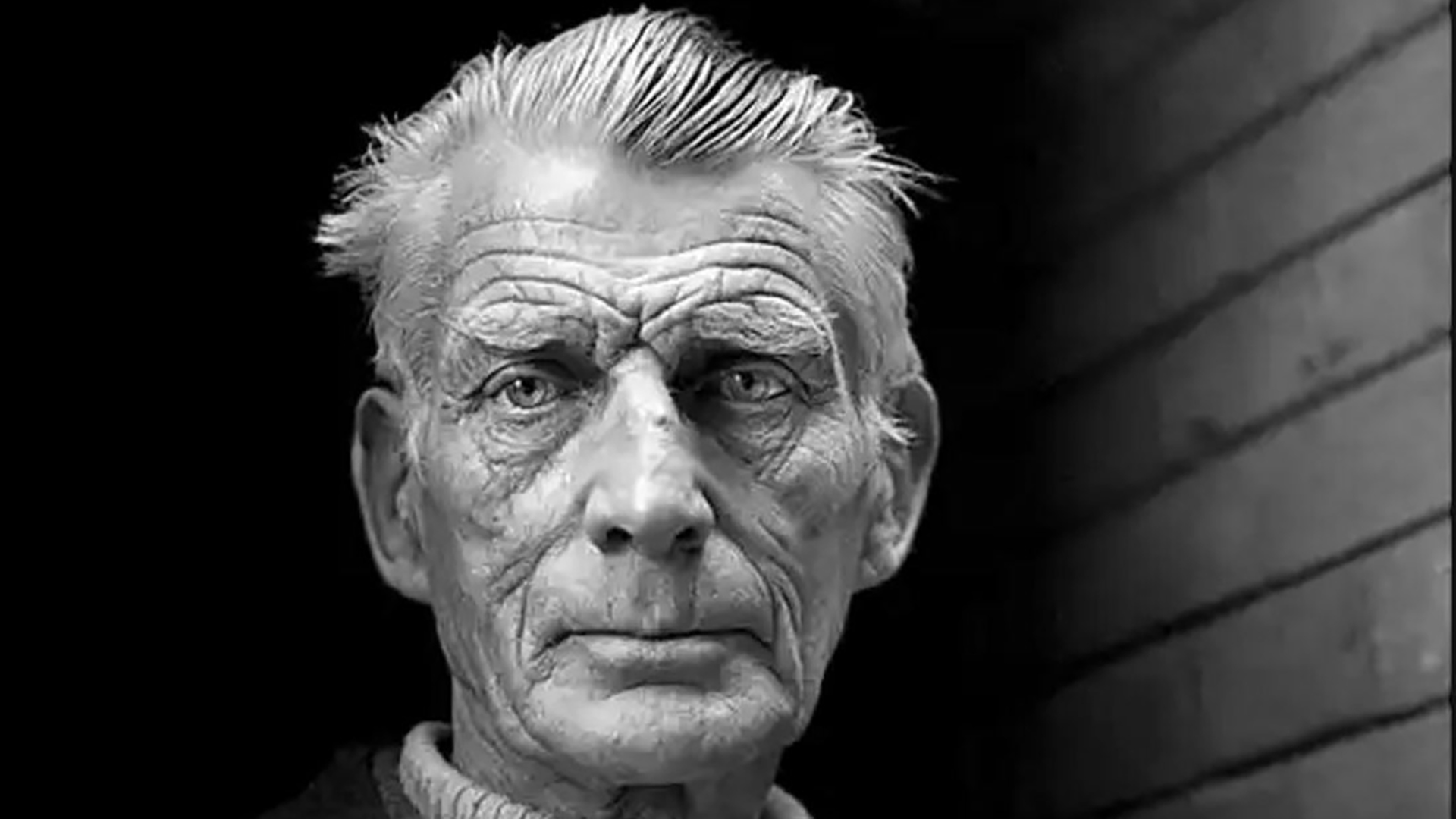 Time only makes this link between the shepherd and the world around him clear. Frammartino’s pacing allows for that. It is slow, but as the action shifts between the old man and the speleologists' exploration of the cave, the film itself is not. Like the Constable painting, the film draws us in to the details, understanding that a quick cut robs us of the opportunity to take in each frame. The themes of Il Buco are borne out of the juxtaposition of the events that unfold within it. But the richness of the film lies in our immersion in this world, which takes place gradually over the course of its all-too-brief running time.