Ian Haydn Smith talks to director Edward Berger and lead actor Felix Kammerer about their collaboration on Netflix’s All Quiet on the Western Front, which details life in the trenches from the perspective of a new German recruit.

Erich Maria Remarque’s 1928 anti-war novel is narrated by Paul Bäumer, an 18-year-old enlistee whose belief in the system he grew up in is rocked to the core by his first experiences on the front. His form-master, who marched Paul and his peers from school to the German army-recruitment office, is not present alongside them, but instead sends letters of his belief in the young men’s – and by extension their nation’s – bravery. But Paul quickly learned to see through the jingoism of these missives: ‘In our minds the idea of authority – which is what they represented – implied deeper insights and a more humane wisdom. But the first dead man that we saw shattered this conviction.’

Like Paul, Remarque was 18 when he fought in the Great War. (Although he was conscripted.) The writer was just 28 when his novel was first serialised in Germany. Two years later, it was adapted into a Hollywood film, and again for US Television in 1979. In the years since the novel’s publication, there have been countless anti-war films, from Jean Renoir’s acclaimed La Grande Illusion (1937) to Francis Ford Coppola’s Apocalypse Now (1979). The experiences of the characters may be different, but the sentiment of these films, and hundreds of others, mirrors the message that Remarque originally conveyed. 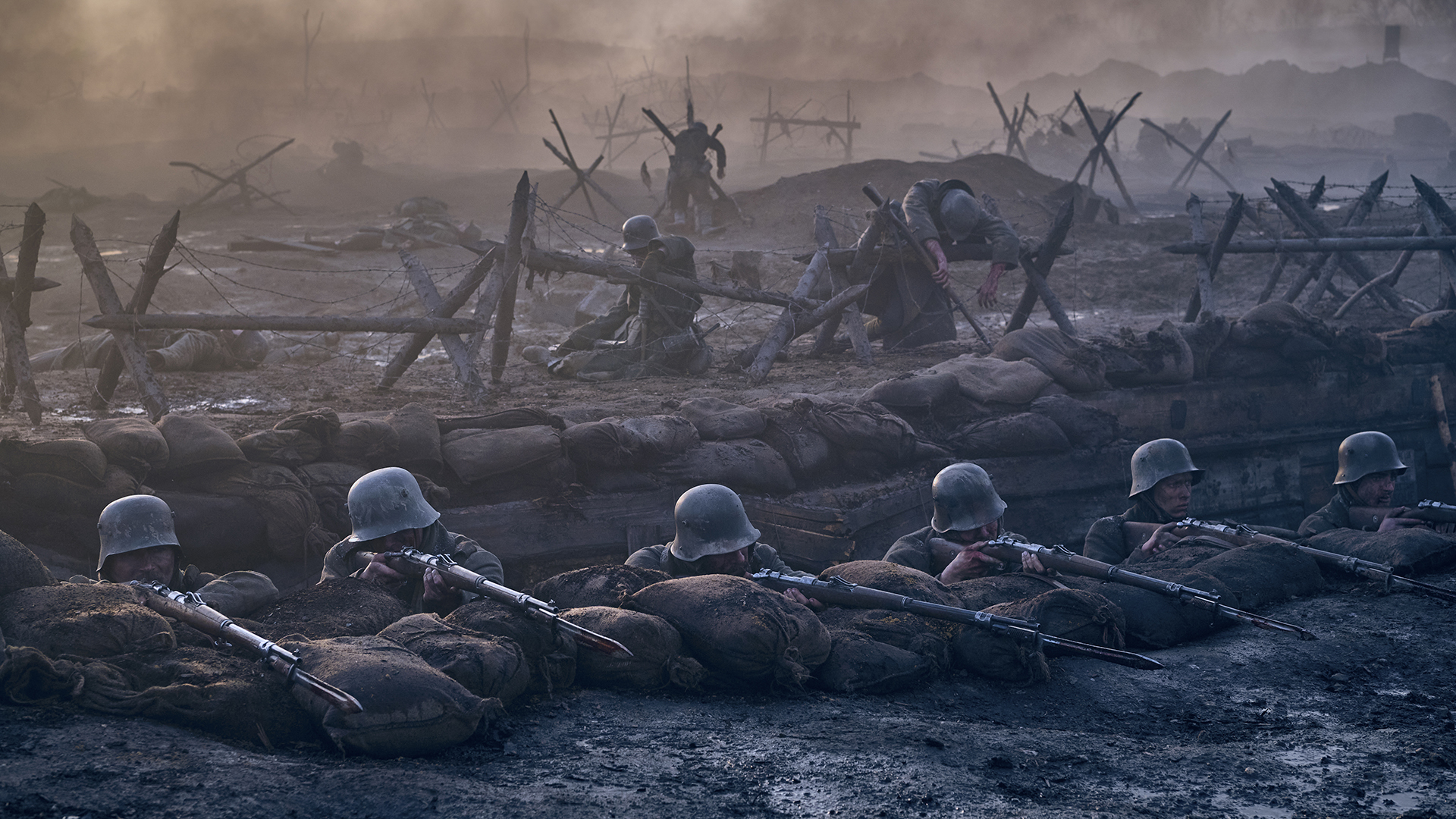 So what need is there for a new screen adaptation of All Quiet on the Western Front? And is a conflict that raged over 100 years ago still relevant to today? From the outset, director Edward Berger’s take on the novel for Netflix is strikingly different. Rather than start with Paul, we see the journey of another new recruit, whose charge into battle ends with his death. He is one of thousands of bodies stripped of their uniforms and dumped in a mass grave. Those uniforms are then recycled – washed of blood, with shrapnel and bullet holes stitched up – and returned to barracks where a new round of soldiers prepare for war. Paul is given the uniform of that dead man. This prologue, the brief cycle of one soldier’s life and death on the front line, underpins the film’s worldview. As well as telling Paul’s story, the film is a tale about the machinery of war: social, political, industrial and military.

Berger was approached to direct the film by producer Malte Grunert. ‘He called and asked if I thought it was a good idea and would I be interested,’ says Berger. ‘I thought it would be great, but I hadn’t read the book in 25 years. So, I went home and pitched it to my family. Whenever I do that, my kids usually aren’t that interested. But this time, my daughter immediately responded, “You have to do that. I just read it in school and it’s really powerful. Particularly the scene in the crater with the French soldier. I cried over that scene.” I thought, if a book that’s 90 years old can make such an impression it must still pack a punch. I read it again and she was right. That’s what made me do it. That and the fact that we rarely get a chance to make a film about the “bad war” in Germany.’ 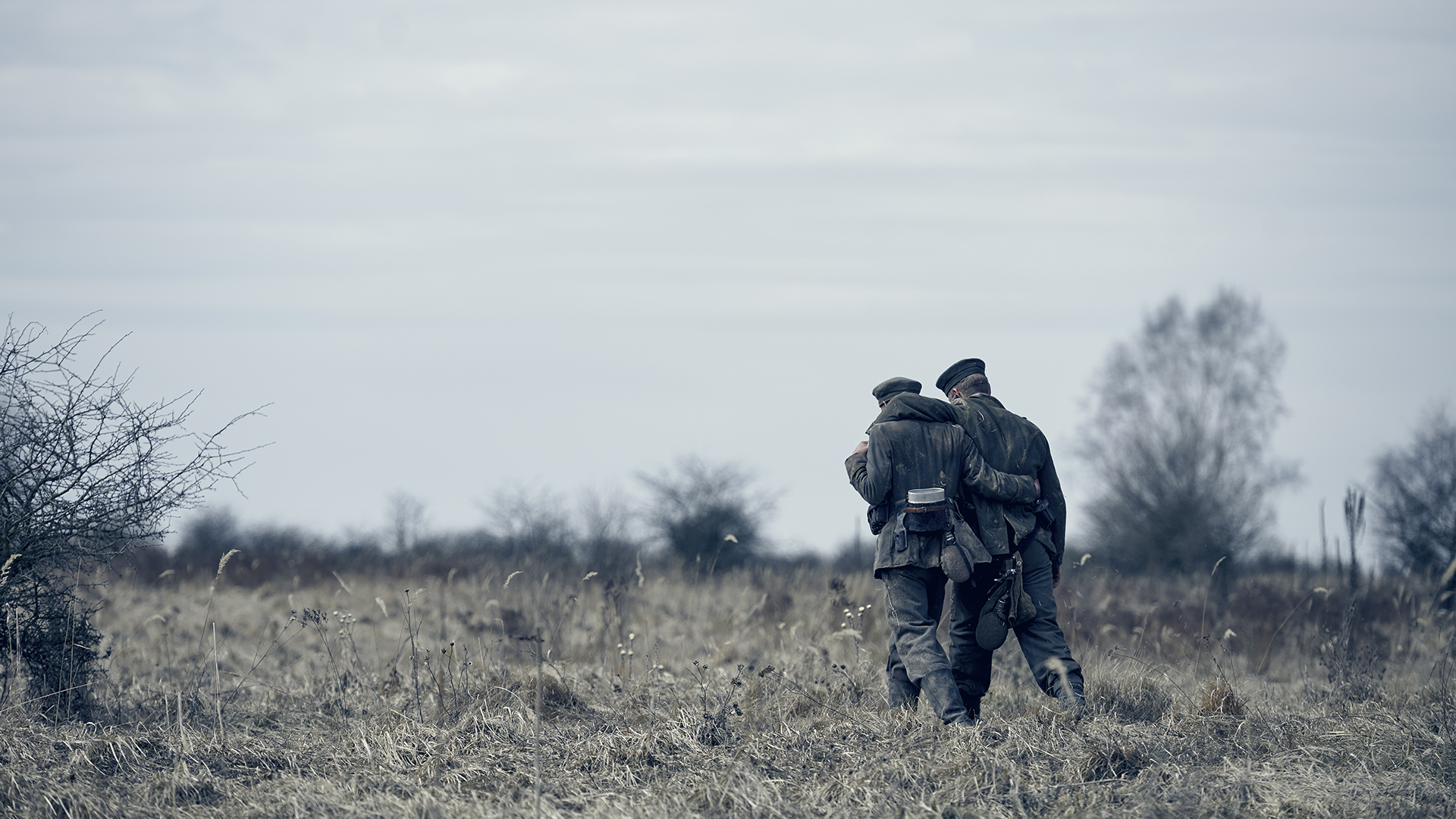 Berger also recognised how powerfully the novel resonated with the contemporary political climate. ‘The rising wave of patriotism and nationalism in Hungary, southern France, Germany, the UK, USA and Russia has produced these populists using a kind of speech that wasn’t so different to back then. I was editing another film and remember being on the subway and hearing these divisions, the aggression between people, which was so open. It added to my conviction that this film should be made.’

‘I hadn’t read the novel in school like many of my friends,’ notes Felix Kammerer, who makes his screen debut playing Paul. ‘I first read it when I was studying acting in Berlin just out of interest, so I didn’t pay too much attention to every detail. When I received the call about the film, that’s when I read it properly. What emerged, for me at least, is how neutral Paul’s character is. He is defined by the people around him and he observes everything. It’s those qualities that tell us what he is and who he is. It’s a clever tactic because when you read the novel, you become Paul Bäumer.’ 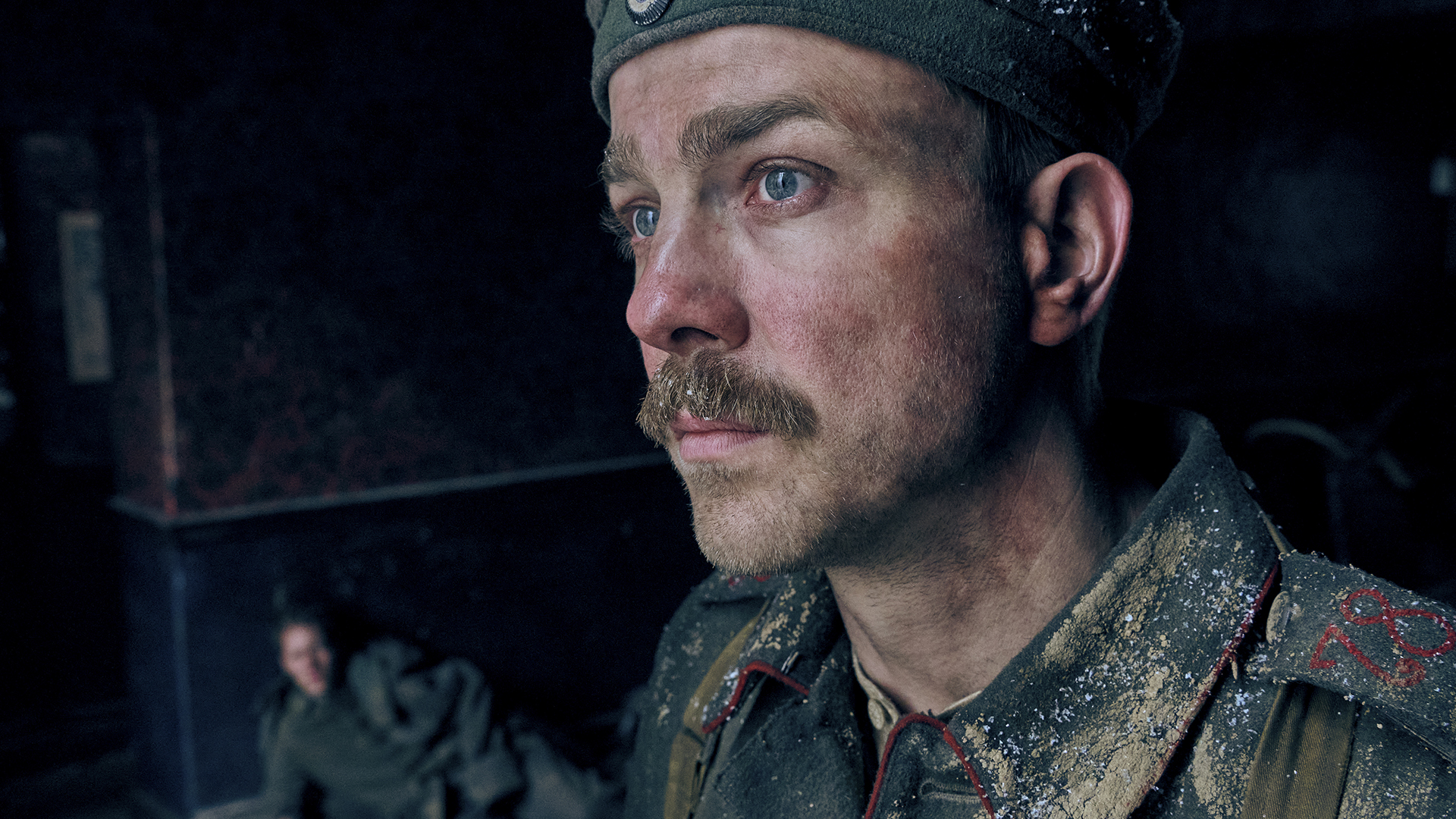 Paul lives at a time when coverage of the war – of the image of it – was easily manipulated by those in power. ‘Germany had won three wars in the 19th century very quickly,’ Berger notes. ‘The grandfathers of these boys thought it would be the same again. And with no independent news, no television coverage, people weren’t seeing these images of the horror that was unfolding. Many people still thought it was an adventure. Strangely, that’s the expression many of the young actors had when we were shooting the make-up and costume tests – they all had the same expression and sense of wonder in their eyes. But what they had to do was clearly very different.’

The physical aspect of playing a soldier helped Kammerer and his fellow cast members step into character. ‘The uniforms were made from felt, which was really heavy. Edward also used weights in the clothing, which affected the way we walked. But then the rain, and the water and mud from the trenches, added to that. We also had water in our boots. And we had to carry the backpacks. In the end, everything weighed around 45 kilos. I had been training in advance, to build up stamina. But we all got some sense of the exhaustion these young men would have felt.’ 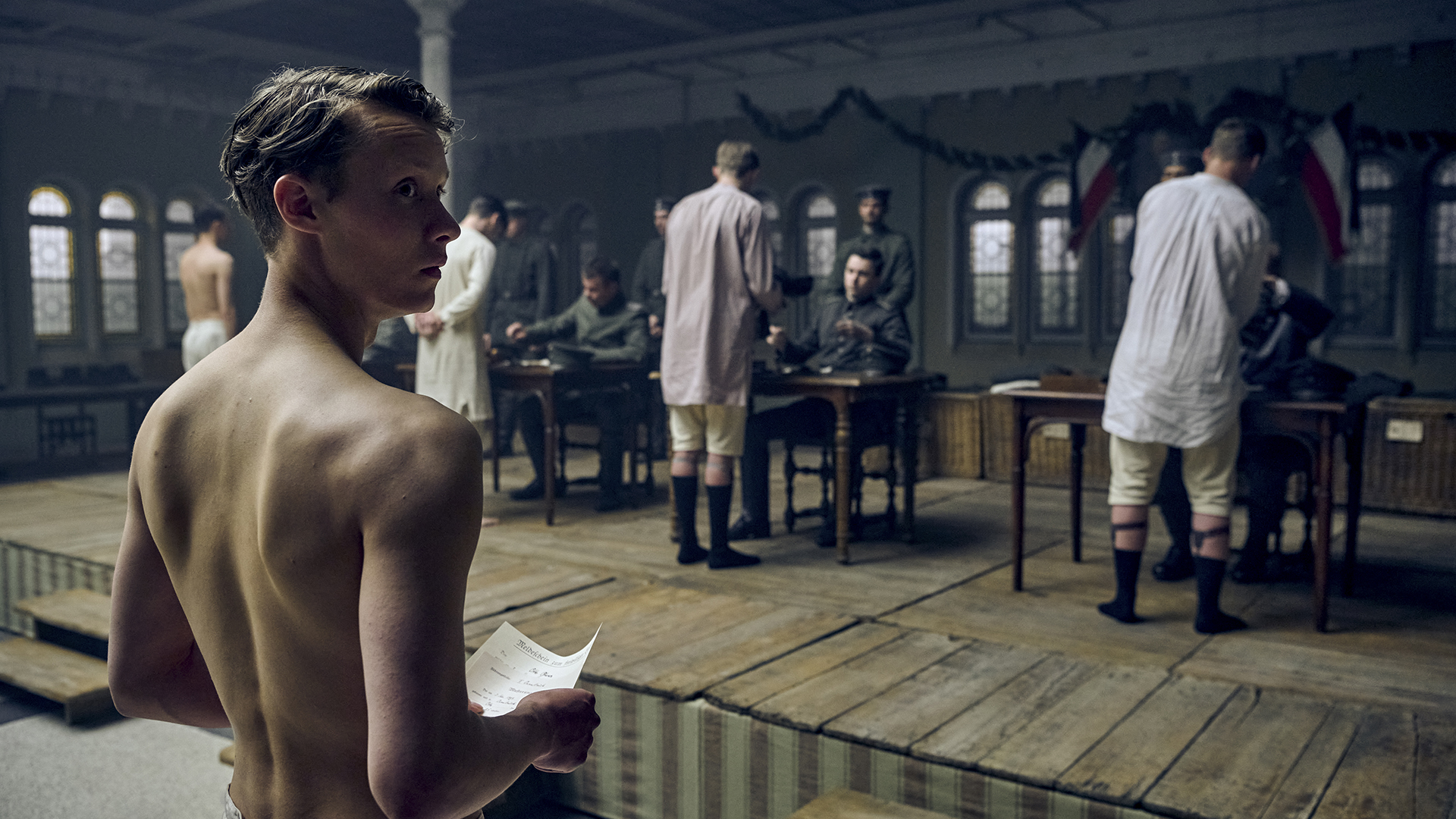 Having had no previous screen experience, Kammerer devised a system of working out the emotional, psychological and physical state his character would be in at any given moment in the script. It’s something that impressed Berger. ‘Felix had this Excel spreadsheet with three numbers; one is pulse, the second is the wish to kill, and the final the urge to survive. Against those three he assigned numbers, so he knew in each scene the intensity of those three elements that were required. It was a clever way of knowing how Paul would behave at every moment.’

The horror of the conflict, in both the book and Berger’s film, reaches its apotheosis in the encounter between Paul and a French soldier in a trench. The larger battle around them recedes as these two men fight to the death and then, in fear and horror at their actions, hold desperately on to life. ‘That was the scene that most resonated with my daughter,’ Berger reflects. ‘There was a lot of pressure on making that work. The plan was to shoot that scene over two days. It takes up something like three pages in the book, which should have equated to three minutes of film time. But in rehearsals it was coming in around 10 minutes. My assistant director was telling me that it needed to be shortened. At the same time, I had my daughter’s voice in my other ear saying, “You can’t screw this up”. We ended up shooting what we had in rehearsal, building up the scene moment by moment. We needed to convey both men’s survival instinct, but then gradually have them realise the person they’re fighting is just like them – the training they had to kill without thinking is overtaken by their humanity.’ 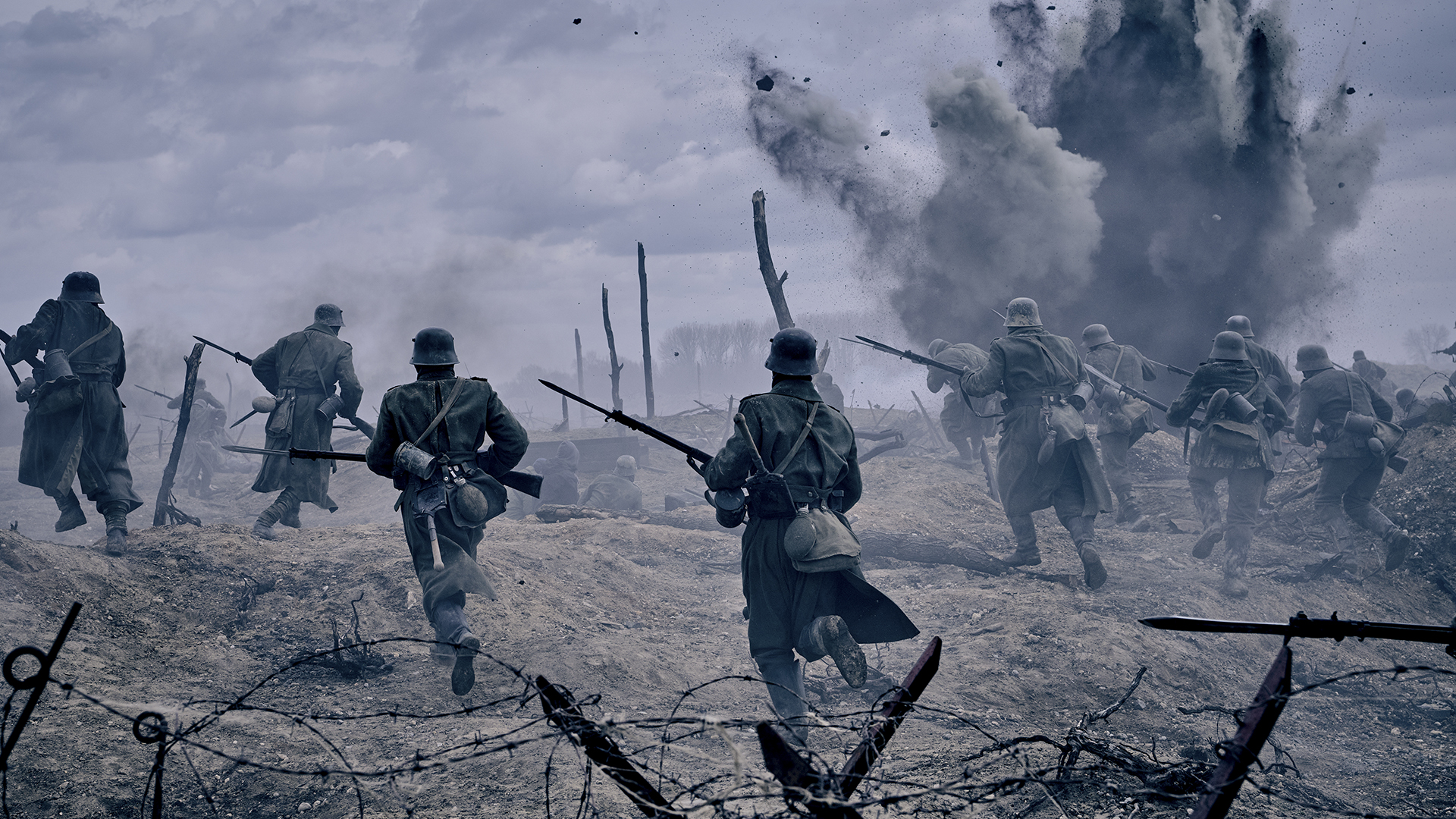 ‘It was one of the most challenging scenes,’ remembers Kammerer. ‘I was quite nervous before we started. I was in my apartment, looking at how the scene played out on my spreadsheet, and I thought, this is 50:50. It will work or it won’t. But it did because of the way Edward rehearsed the scene with us. He worked through the choreography and then, when it came to shooting, we played the scene in the way that felt right to us.’

If that scene is one of the most intense and intimate in the film, elsewhere Berger broadens the scope of his vision. The political machinations of Germany’s attempts to seek a way out of the war have been added. And the mechanisation of war plays a significant role. In one sequence, shortly after the German forces gain ground against the French, they find themselves beaten back by a line of tanks. Key to conveying the horror of this modernisation is Volker Bertelmann’s score. ‘I felt it was important to create a different tone. I said to Volker, let’s do three things. Let’s do something different to what’s previously been done with this kind of film. That also made me think that nothing should be beautified. The images I wanted to create should not be attractive. They should horrify. And the music should help in some way with creating that discomfort. And the third thing was not to sentimentalise. We have to feel for Paul, but only through his experiences, not through the music telling us that’s how we should feel. Volker found this sound with a harmonium that he treated and processed. With all its crackling and the breathing sound of it being played, it gives the sense of this hulking beast that these tanks represent.’ 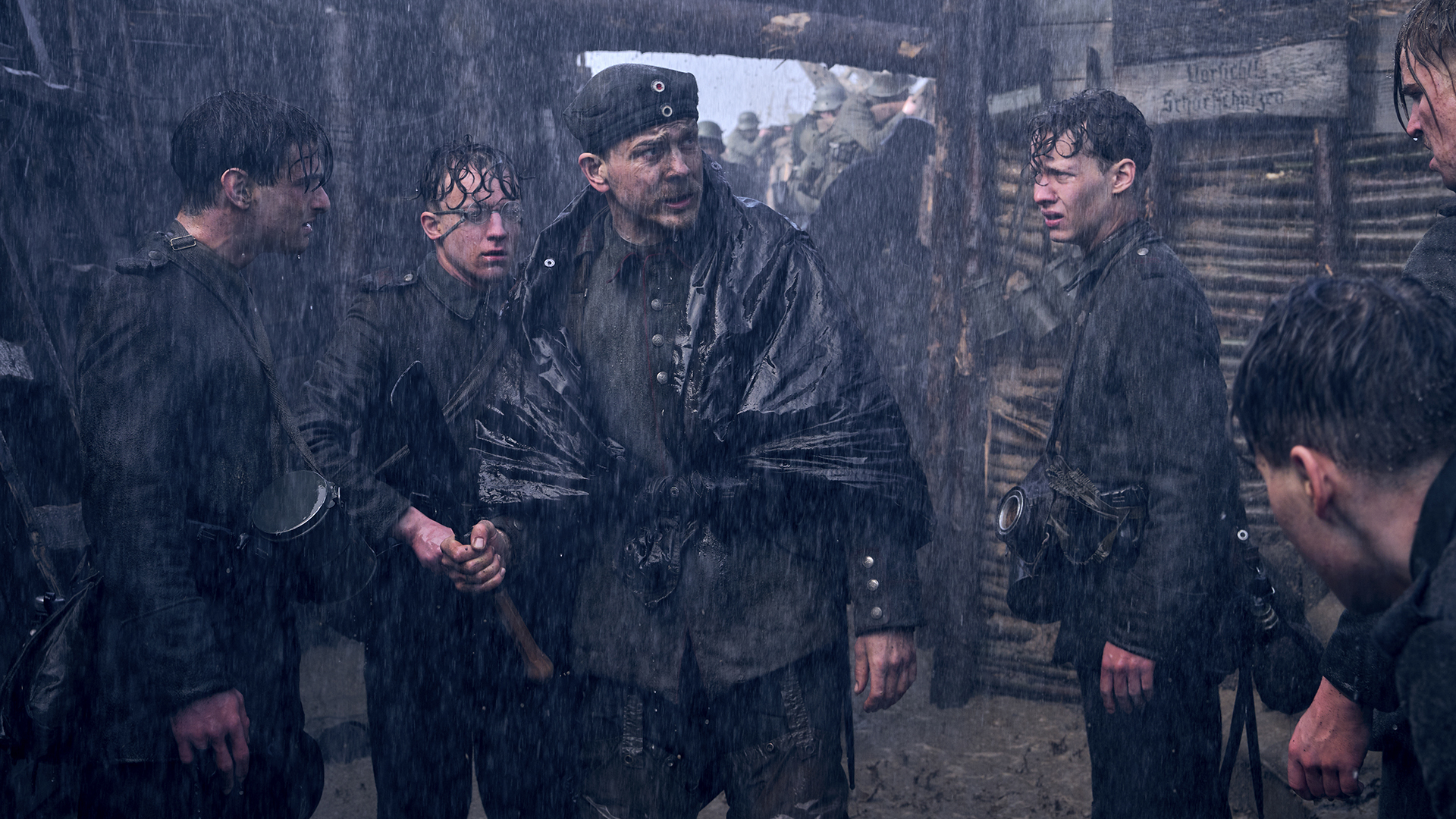 Like Michael Haneke’s The White Ribbon (2009), Berger’s take on All Quiet on the Western Front also looks forward to a future generation that will once again see conflict play out upon the world stage. There is a scene, late in the film, when one of Paul’s friends is confronted by an armed farm boy. It’s one of the film’s many chilling codas to the story of this war. ‘In an early version of the script, I had the farmer – the boy’s father – with the gun,’ Berger notes. ‘But I realised that placing it in the hands of the farm boy tells us more about what this war has achieved. Not just to the world in the present, but how it has destroyed the future. It’s created a cycle that will continue.’