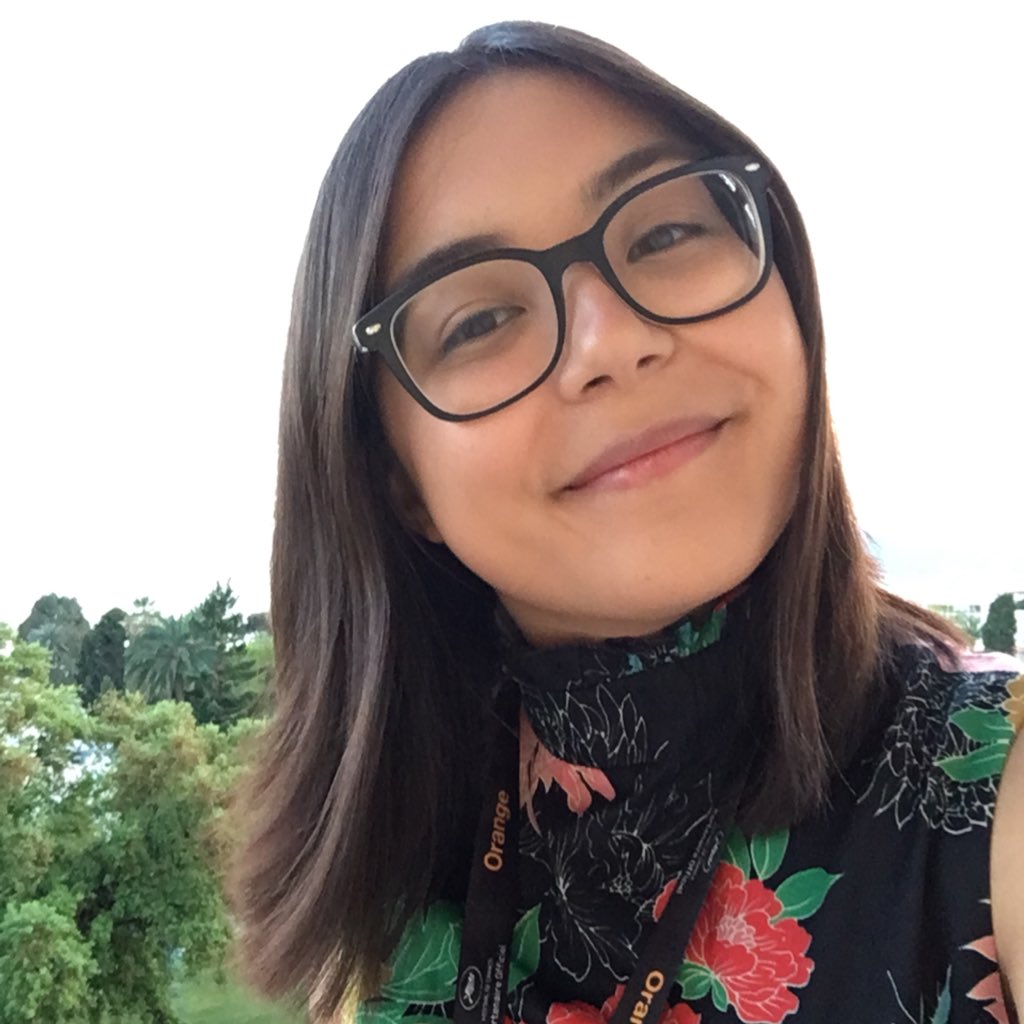 At film premieres, Harris Dickinson says that he ‘struggles with being present’. ‘I find myself just retreating into this numbness to cope with everything that's going on,’ he explains, noting that it’s often so overwhelming to watch himself on a cinema screen with hundreds of people around him that he forgets to enjoy himself. The London-born actor has broken out in acclaimed arthouse indies (Beach Rats [2017], The Souvenir: Part II [2021]) and blockbuster fare (The King’s Man [2021]), but there was something different about Triangle of Sadness (2022), Ruben Östlund’s riotous satire that prods at wealth and class mobility through the perspective of Dickinson’s character, a male model named Carl. The film played at the prestigious Cannes Film Festival, but all politeness dissipated once its unsuspecting audience was exposed to the audacious future Palme d’Or winner. 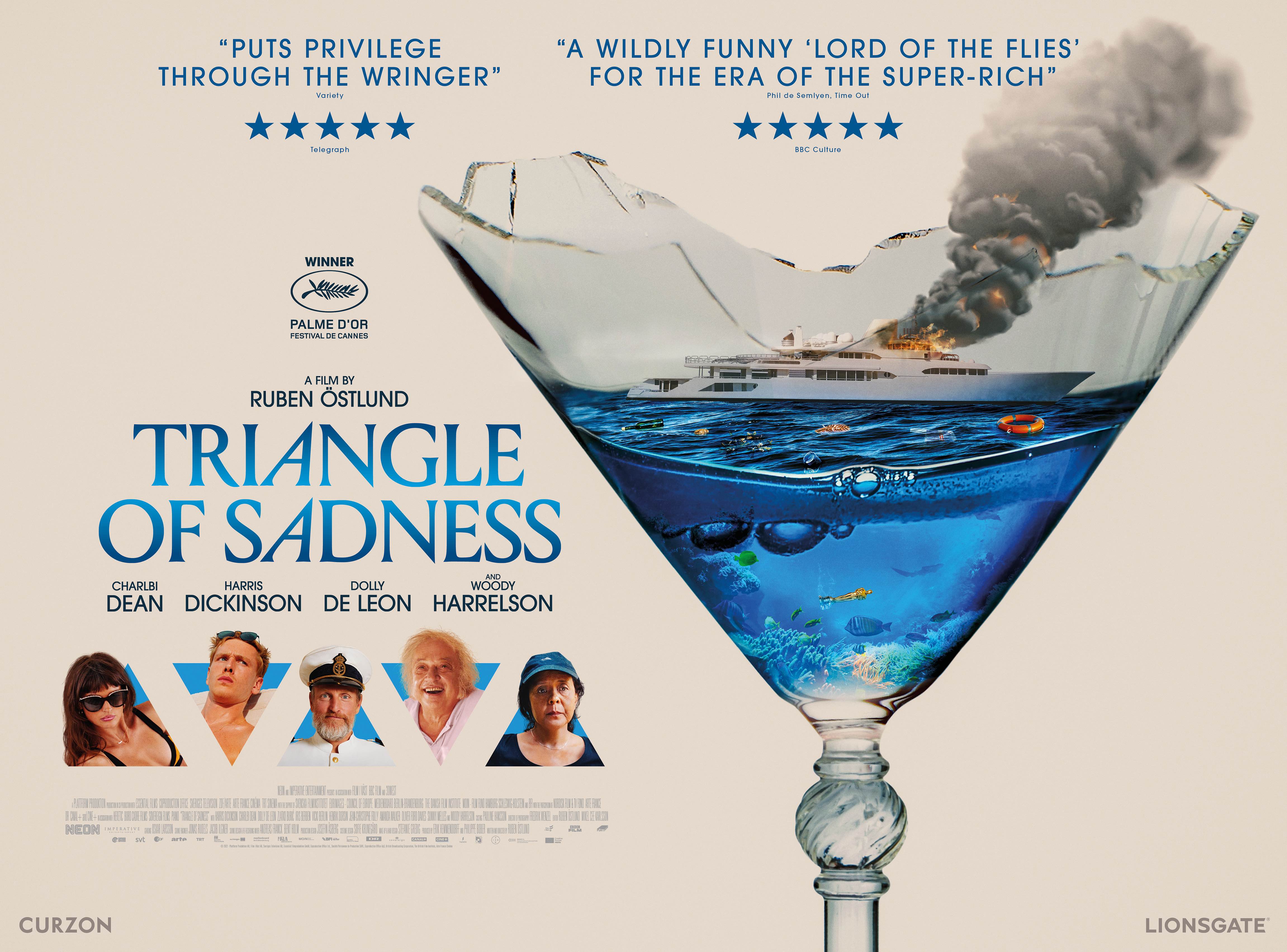 ‘It was like a football game,’ Dickinson recalls. ‘There was a raucous energy.’ At that moment, not only was he able to enjoy himself, but also ‘soak in what a journey it has been to get the film made’. That is, until the lights turn on and the audience applauds for what feels like hours, while a camera tracks the stars’ every reaction. ‘It’s a strange environment, especially with the standing ovation when you’re standing there like a lemon for seven minutes,’ he says, laughing. ‘It’s anything but normal.’

The surreal glamour of Cannes also mirrors the vacuous, affluent spaces of Triangle of Sadness. Set in the world of the obscenely wealthy, the film sees Carl and his model-influencer girlfriend Yaya (Charlbi Dean) board a calamitous yacht cruise that leaves its passengers shipwrecked on an isolated beach. Filming took place during the pandemic, and on one of those oddly opportune moments, the emptiness of lockdown strangely ‘emulated that trapped sort of feeling’ Carl is confronted with. 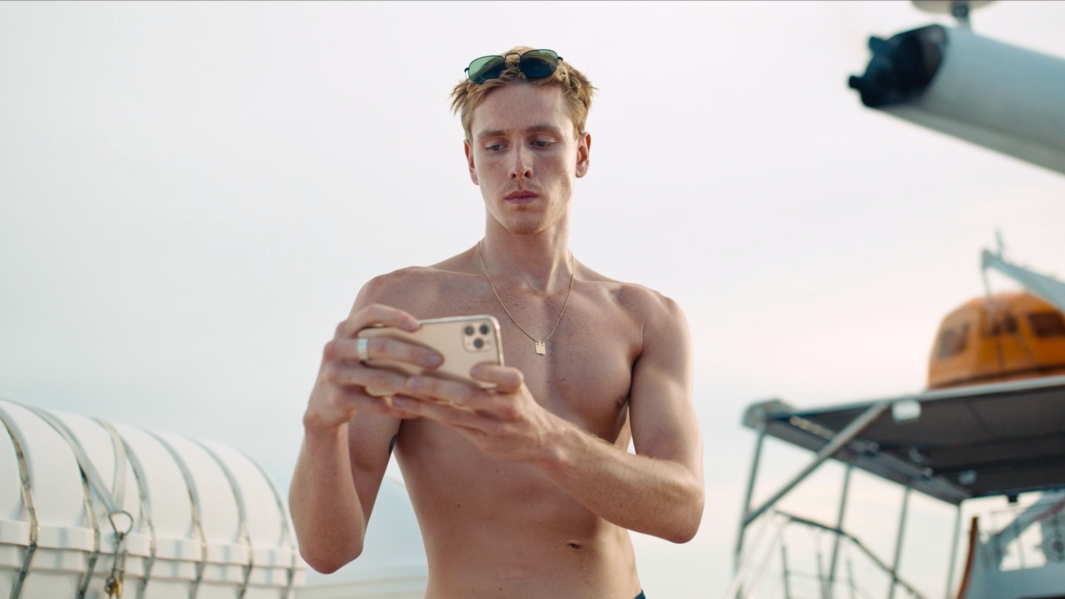 This immersive experience was intensified by Östlund’s process, which involved filming dozens of takes. One particularly strenuous scene was an argument between Carl and Yaya: an awkward dispute over a restaurant bill descends into a ludicrous screaming match about their unequal financial statuses. After yelling at his scene partner for hours, Dickinson remembers that his voice was ‘gone by lunchtime’. But in enduring this repetition, he came to discover that Östlund’s onerous methods had their purpose. 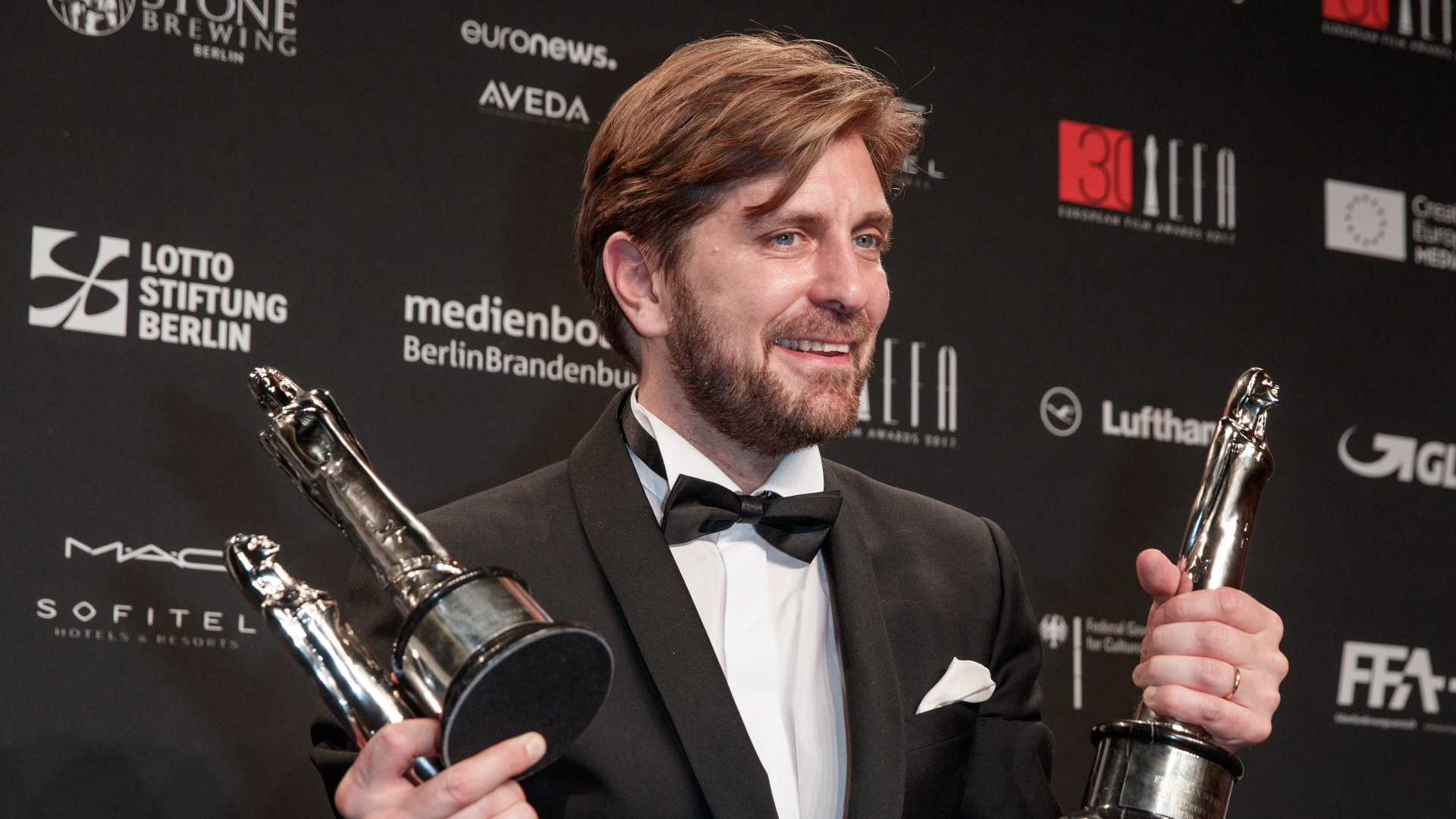 ‘It’s invigorating because you find new stuff,’ Dickinson says of the director’s process. ‘I know that some people find it difficult, but I really loved it because I was able to scrutinise myself so much and be open to that. I think that's a rare thing when you've got that much space and time to explore a scene. The environment he creates is for everyone to work towards something that they're going to be really proud of. It feels like you're doing something special.’

Aboard the yacht, its floors that divide the passengers from the servers, cleaners and crew below create their own class hierarchy, where staff put up with outrageous demands in the hopes of earning tips. That sharp blend of absurdist comedy and political observation reaches its vomitous peak when a multi-course fine-dining experience is disrupted by a storm. A jovial argument between the ship’s socialist captain (played by Woody Harrelson) and a Russian capitalist (Zlatko Buric) is juxtaposed with seasickness and exploding sewage. Dickinson recalls filming the sequence in Sweden on a ‘crazy ship in a studio that was on hydraulics’, in order to replicate the constant rocking motion of the yacht. Life imitated art, as the cast felt just as sick as their characters, while ‘Ruben was smiling behind his monitor like a mad puppet master’. 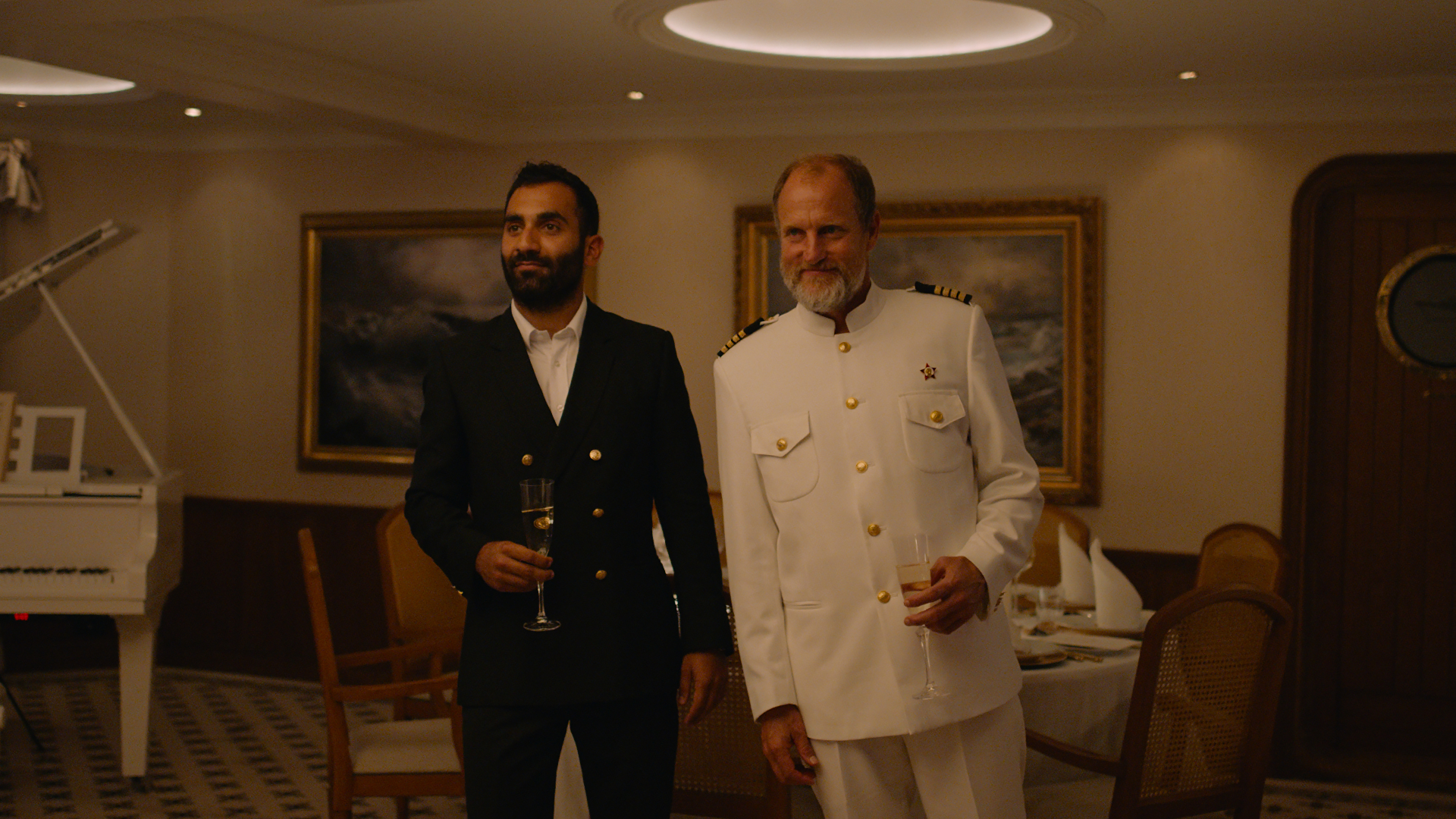 Carl occupies a blurrier space in Triangle of Sadness’ class structure. In the original script, the character was described as a car mechanic who was scouted to become a model, adding a hidden detail to his relationship with wealth. ‘He wasn't privileged, but I knew he entered a world where operating in those circles had become somewhat normal,’ Dickinson says. ‘But it was still strange for him to be in this environment and that his looks and his career had given him access to that. I also think that changes how desperate he is. If he got scouted from being in a garage, it gives further scope of where you'd go in order to survive.’

In a film marked by archetypes and loud personalities, Carl could’ve been another idiotic male model, but Dickinson sought to give him more depth and nuance. ‘I think there were times where I felt Carl was going a little bit too far in one direction, and I stood up for him,’ the actor says. At one point, he’s seen reading Ulysses, and though Dickinson admits that you can’t know if he is an ardent James Joyce fan or just performatively bragging, the actor likes to think his character wants to ‘educate himself’ within an industry that is ‘not entirely fulfilling’. 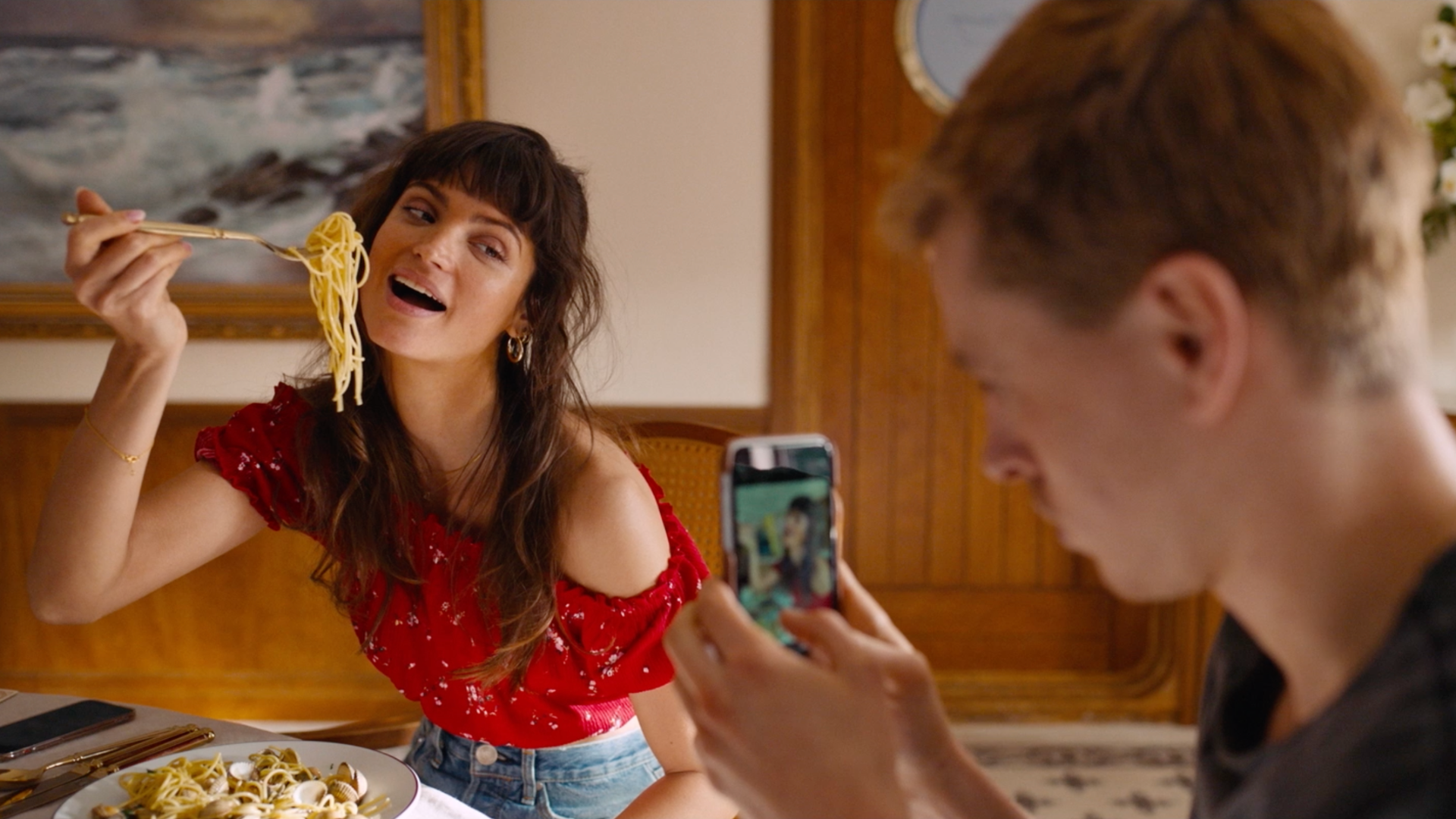 Of course, once the passengers are stranded, Ulysses is forgotten. In an inverted society where wealth means nothing, Carl uses his beauty as currency to win over Abigail (Dolly De Leon), a cleaner who takes over leadership of the island as the sole person with survival skills. That subversion of Carl’s image is most apparent in his relationships. With Yaya, they are both combative and hesitant to talk about the real issues they have, while his affair with Abigail possesses greater calmness and maturity.

‘[Carl and Abigail’s relationship] needed to feel real and it needed to feel like it wasn't just for [our] gain,’ Dickinson says. ‘There was something that sparked between us that was unspeakable and also very true. And I felt that came out in the film because he finds something in her that he's been searching for in Yaya. That feeling of truth within love, uncomplicated love.’ In diving headfirst into Östlund’s trademark idiosyncrasies, Dickinson emerged with something altogether more sincere.

TRIANGLE OF SADNESS IS OUT IN CINEMAS 28 OCTOBER