The latest instalment in the record-breaking sci-fi franchise combines awe-inspiring effects with a deep-seated plea for sustainability, writes Yasmin Omar.

There is a condition, known as Stendhal syndrome, where sufferers become so overwhelmed by beauty that – when no longer in its presence – they sink into malaise. Pandora, the lush, Edenic paradise James Cameron created for 2009’s Avatar, sparked that same feeling in some viewers, who saw the film over and over, then rushed to message boards to compare notes with like-minded friends. It’s easy to see why. Avatar swept us up in its impeccably rendered prelapsarian world, where tree boughs glow iridescent pink and floating woodsprites cure all ills. Thirteen years and a suite of visual-effects innovations later, Cameron returns to Pandora with Avatar: The Way of Water, which explores a new facet of this verdant planet. 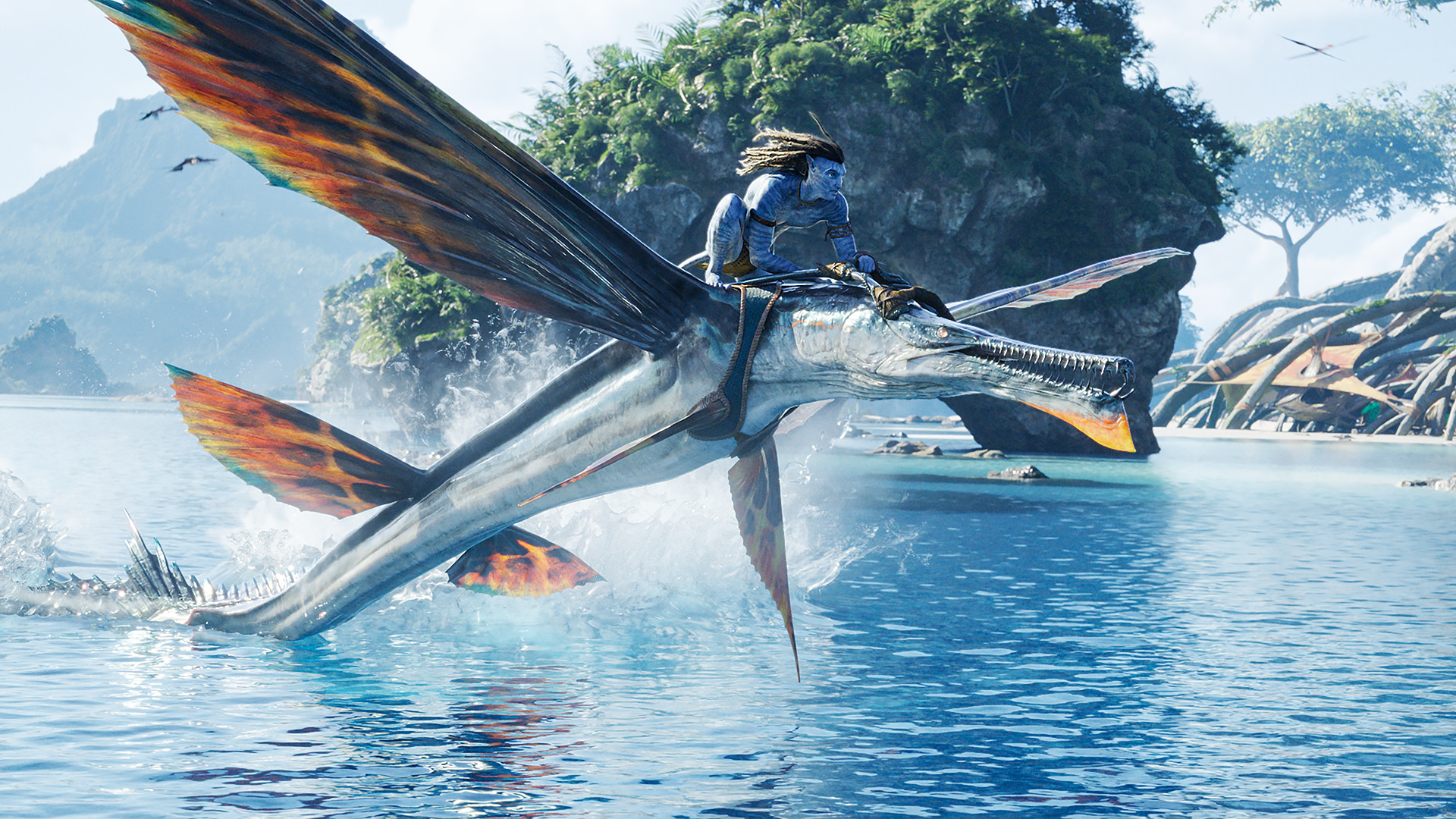 As an aide-memoire, the movie begins with an extended ‘welcome back’ introduction to ensure we can all pick up where we left off (one character genuinely says to another, ‘Remind him how it works!’). This table setting reestablishes the stakes: former Marine Jake Sully (Sam Worthington) abandoned his mission to destroy Pandora’s native Na’vi and loot their precious resource unobtanium; he went native instead, sacrificing his human body to lead this tribe of nine-foot-tall blue-skinned creatures. The Way of Water conveniently explains away some niggling plot issues. A septuagenarian Sigourney Weaver, whose avatar died at the end of the first film, has been brought back as a teenager? Sure, we’ll go with it. Jake’s slain nemesis (Stephen Lang, menacing as ever) also reemerges under suspicious circumstances. Fine, whatever – let’s just get back to Pandora now, shall we? 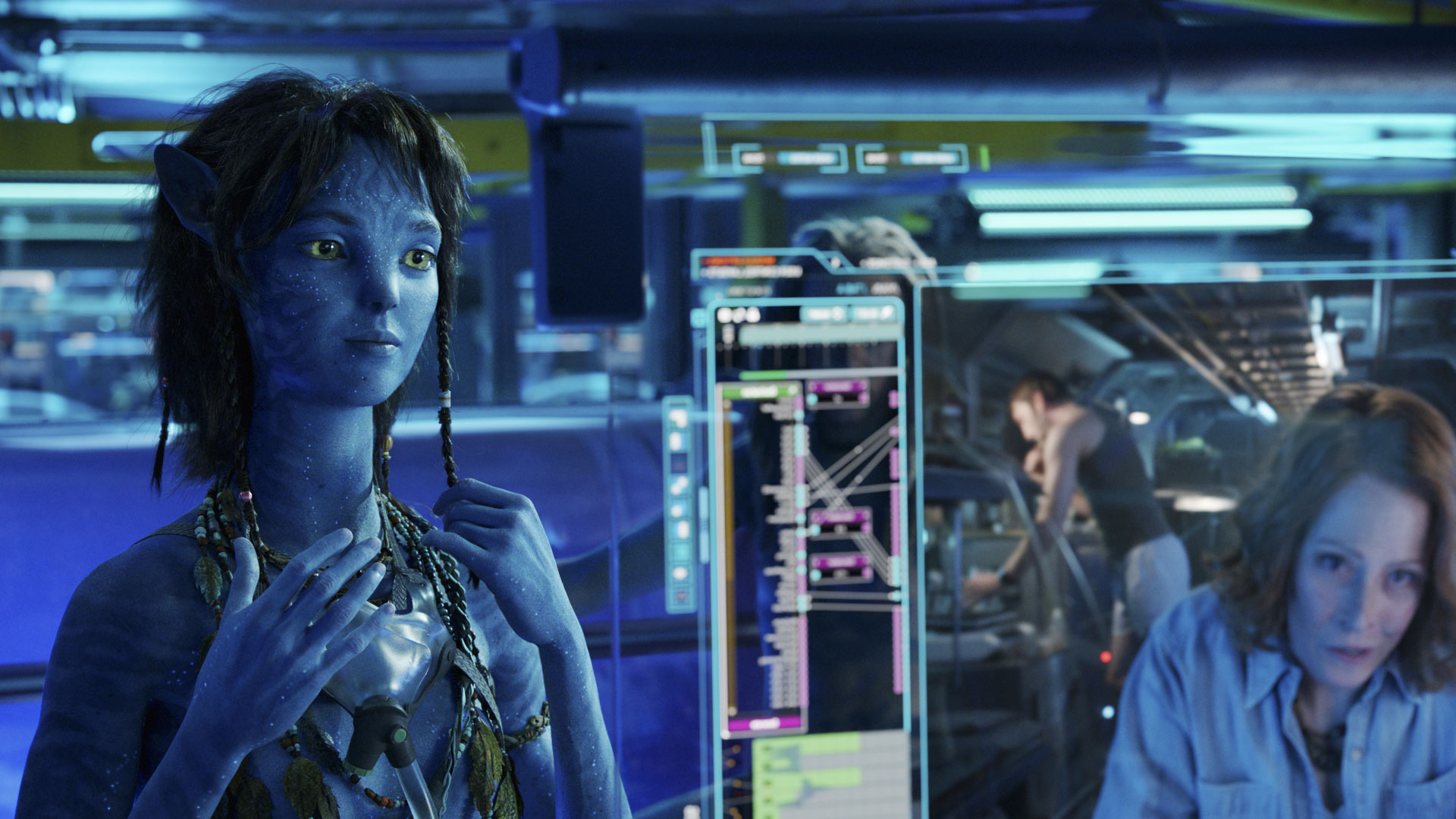 WATCH AVATAR: THE WAY OF WATER IN CINEMAS
Book in 2D or 3D

Jake, his wife Neytiri (Zoe Saldaña, a snarling protector) and their brood of children are uprooted from the forest they call home because they’re being hunted by Lang’s Navy boss. They seek refuge with the Metkayina, a reef clan slightly different in appearance to the Na’vi, with more turquoise skin and flatter tails for swimming. The change in location from land to sea allows Cameron to deepen our understanding of Pandora. His worldbuilding is nothing short of extraordinary. Using 3,500 visual-effects shots, the director has created a magical underwater kingdom, where sunbeams pool onto the ocean floor, illuminating shoals of glowing fish, craggy mounds of coral and golden strands of anemone. Even the inside of a whale looks like a pointillist painting, intricately decorated with a pattern of luminous dots. Care and attention has clearly gone into every frame, and the Na’vi’s interactions with the water are incredibly lifelike (aided by peerless motion-capture technology that registers the slightest flickers of emotion from its cast). 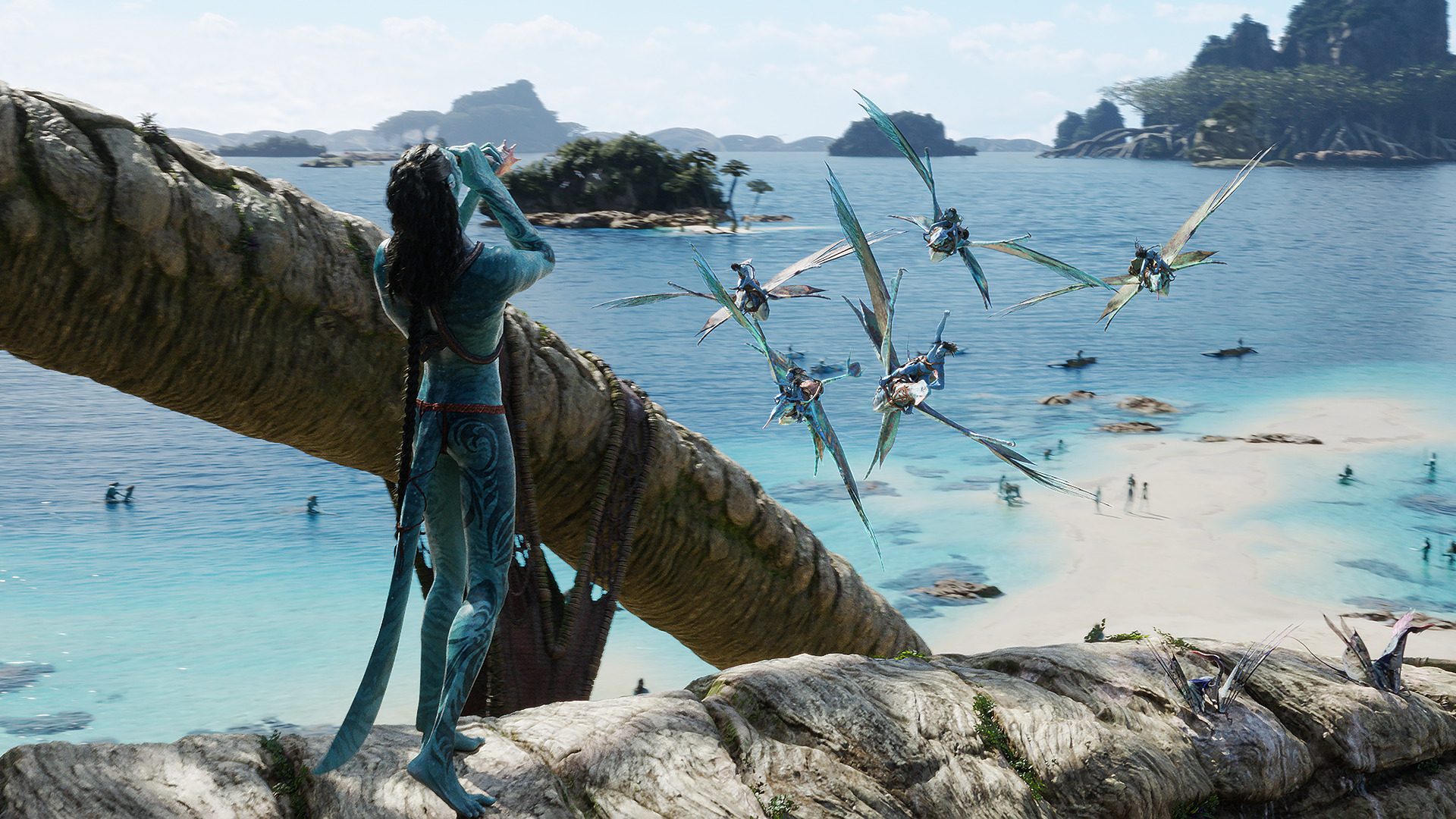 The Way of Water’s transfixing beauty is not an end in and of itself. It serves to underline the film’s wider themes of community and ecological preservation. When the biodiversity is this abundant, seeing it torn asunder by harpoons and grenades and machine guns is suitably horrific – a thinly veiled plea to our own planet’s oil-guzzling corporate overlords that short-term gains invariably result in long-term disaster. It’s remarkable that Cameron, an avowed vegan and environmentalist, has been able to smuggle an overt political message into a movie of such immense scale and mainstream appeal. Much like the misanthropic original, this Avatar sequel is damning in its presentation of humankind. The villains are nakedly evil – applauding each other’s barbary as they meet ‘kill’ quotas for cash – and the Navy openly recognise that they’re going to hell for their misdeeds (there’s no Top Gun: Maverick military worship on Cameron’s watch!). 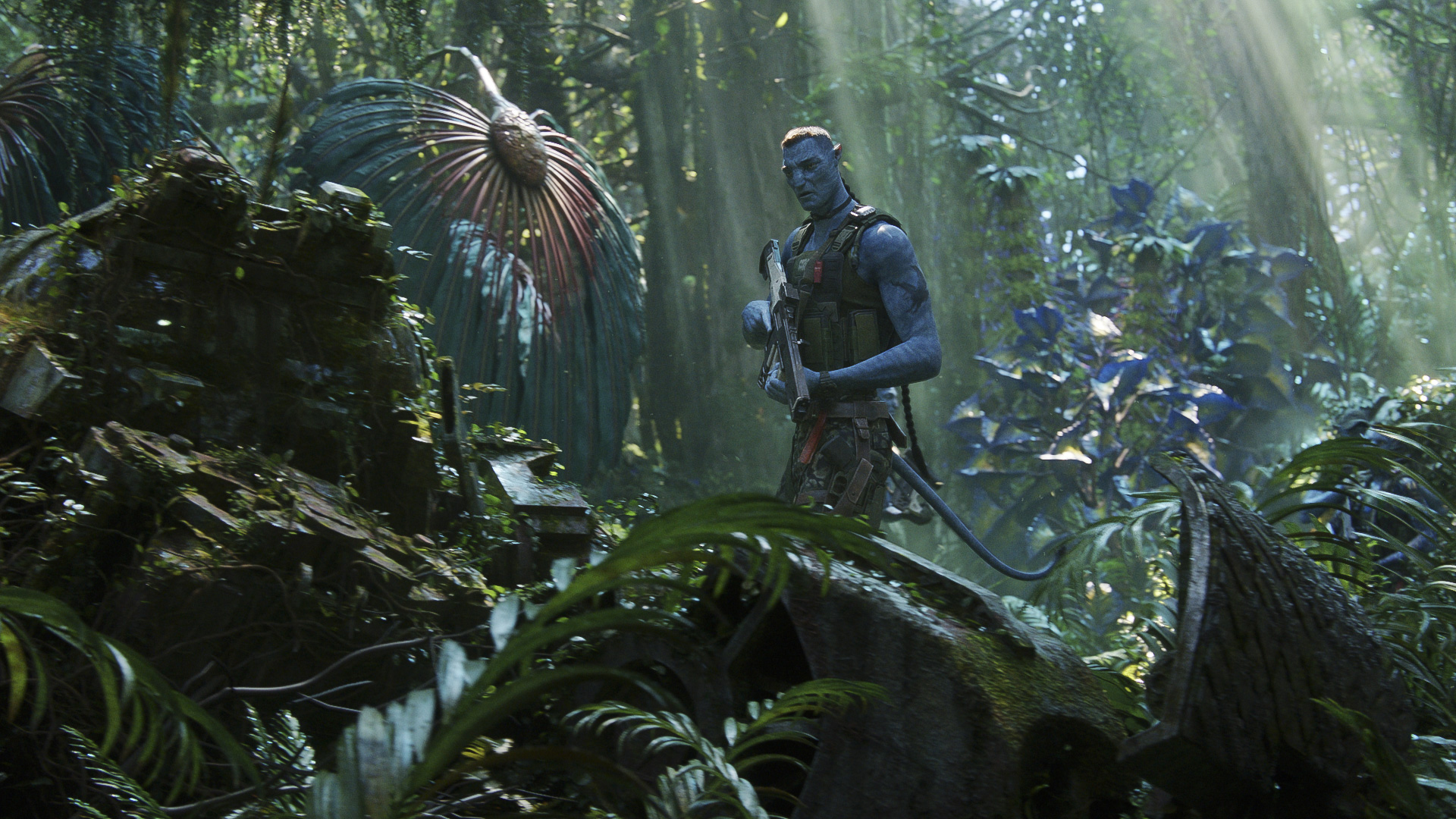 Laudable eco credentials notwithstanding, the script is easily the weakest component of The Way of Water. You can feel the gears turning at certain points: an unobtanium-style MacGuffin arrives over two hours in to never be mentioned again and treacly dialogue is repeated without the intended emotional resonance. Perhaps most disappointing is that this franchise has not solved the problematic racial optics that plagued its first instalment, where white colonisers piloted the bodies of a people coded as Indigenous through avatars. It’s quite the blunder to position a white boy in dreadlocks and a loincloth (Jack Champion’s Spider) as the film’s moral compass. And, although actors of colour have joined the cast, The Way of Water’s most high-profile new performer is Kate Winslet. No matter how long she can hold her breath underwater (seven minutes and 14 seconds, for the record), she doesn’t scan right as a cowrie shell-bedecked tribal chief. 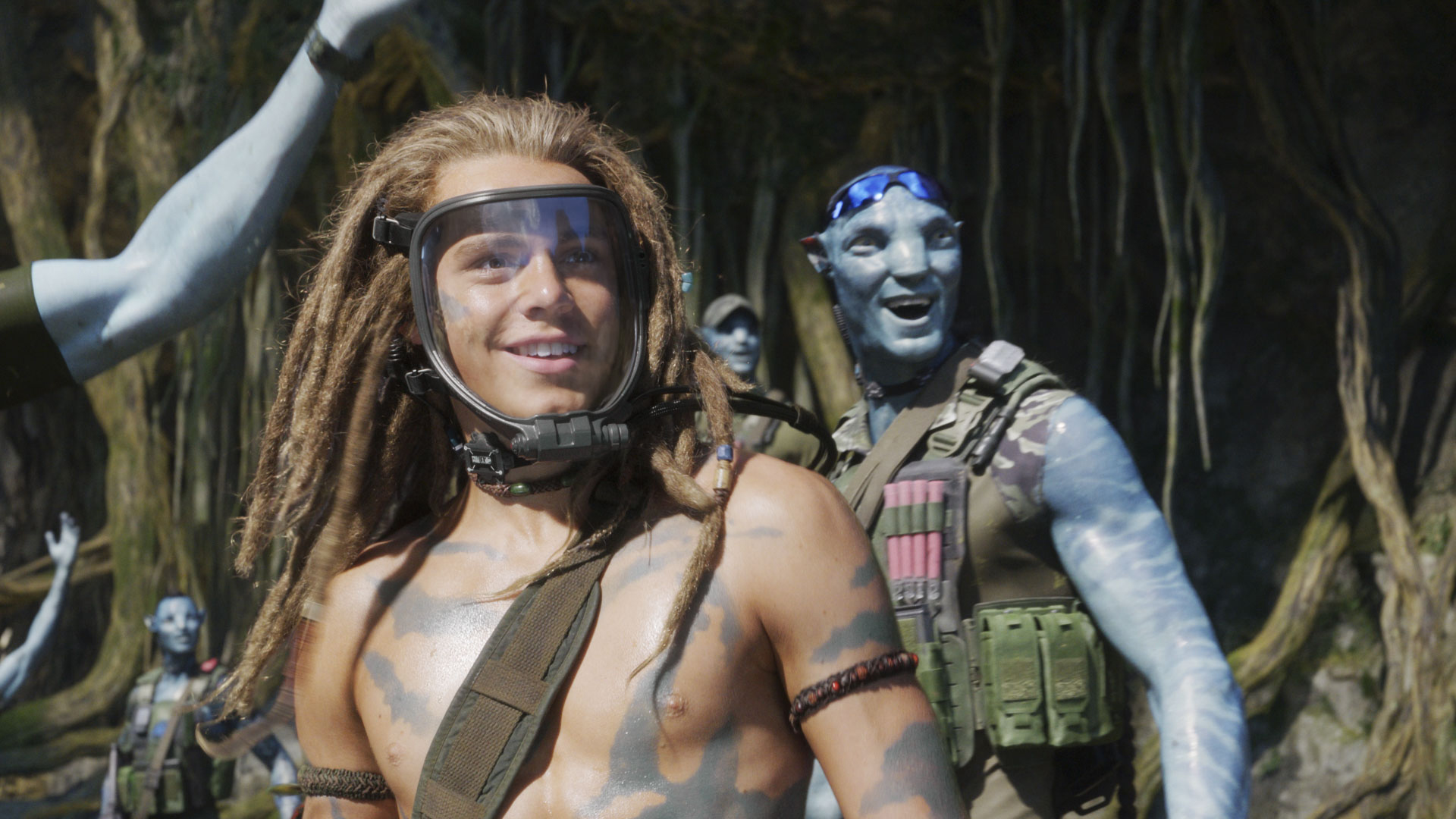 Say what you will about Cameron’s screenwriting, but the man knows how to stage a suspenseful action set piece. There’s a confrontation with a sea beast that’s as stressful as any shark attack in Jaws (1975). The Way of Water is founded on a culture-clash premise – a tussle between Sky People (humans), Forest People (Na’vi) and Reef People (Metkayina) – which allows plenty of room for conflict. The filmmaker crafts the battle scenes with magisterial prowess, listening out for the crash and crunch of machinery, honing in on the raining bullets and shattering glass. As with the original, it’s the final showdown that really kicks things up a gear, and this one has an awful lot in common with a previous Cameron flick (I’ll leave you to discover which one).

Avatar: The Way of Water is not the bolt from the (literal) blue that it was in 2009. And how can it be? It arrives after years of delays, reports of escalating budgets and at a time where sequels are a dime a dozen. Crucially, we sort of know what to expect from an Avatar movie this time around. And yet, The Way of Water is still that rarest of things: a transportive blockbuster that voyages across new frontiers, all of which are fully realised in resplendent detail. Returning to Pandora offers a chance to escape to an unspoilt idyll. As we plunder Earth’s oceans and destroy its wildlife, such a hopeful image is captivating – and not only to those with Stendhal syndrome.

WATCH AVATAR: THE WAY OF WATER IN CINEMAS