It Must Be Heaven

It Must Be Heaven is the new film by Palestinian powerhouse director and actor Elia Suleiman where the filmmaker once again plays the characteristically quiet and quirky E. S., an alter ego version of himself. Having fled from his native homeland of Palestine, E.S. traverses different cities grappling with ideas of identity, nationality and belonging. Here, Kaleem Aftab explores the filmmaker’s signature style through his use of sound as an essential part of what (and how) he wants to communicate to (and with) his audience.

It Must Be Heaven received a Special Mention at the 2019 Cannes Film Festival, where it was competing for the Palme d'Or. Remarkably, all four of his movies – Chronicle of a Disappearance (1996), Divine Intervention (2002), The Time That Remains (2009) and It Must Be Heaven – have all unspooled at Cannes, the three latest in competition. It's a unique body of work, and like Swedish great Roy Andersson, he’s a filmmaker who takes several years to make a film, so each one feels like an event that we should cherish.

All Suleiman's films have a signature style: a mute Palestinian, played by Suleiman himself, observes a world falling apart around him. However, in It Must Be Heaven, it's finally revealed that the character can speak when he chooses to. A fact that makes it even more apparent that the silence of his principal character is a reflection on Palestinians having no say in what happens to their homeland. 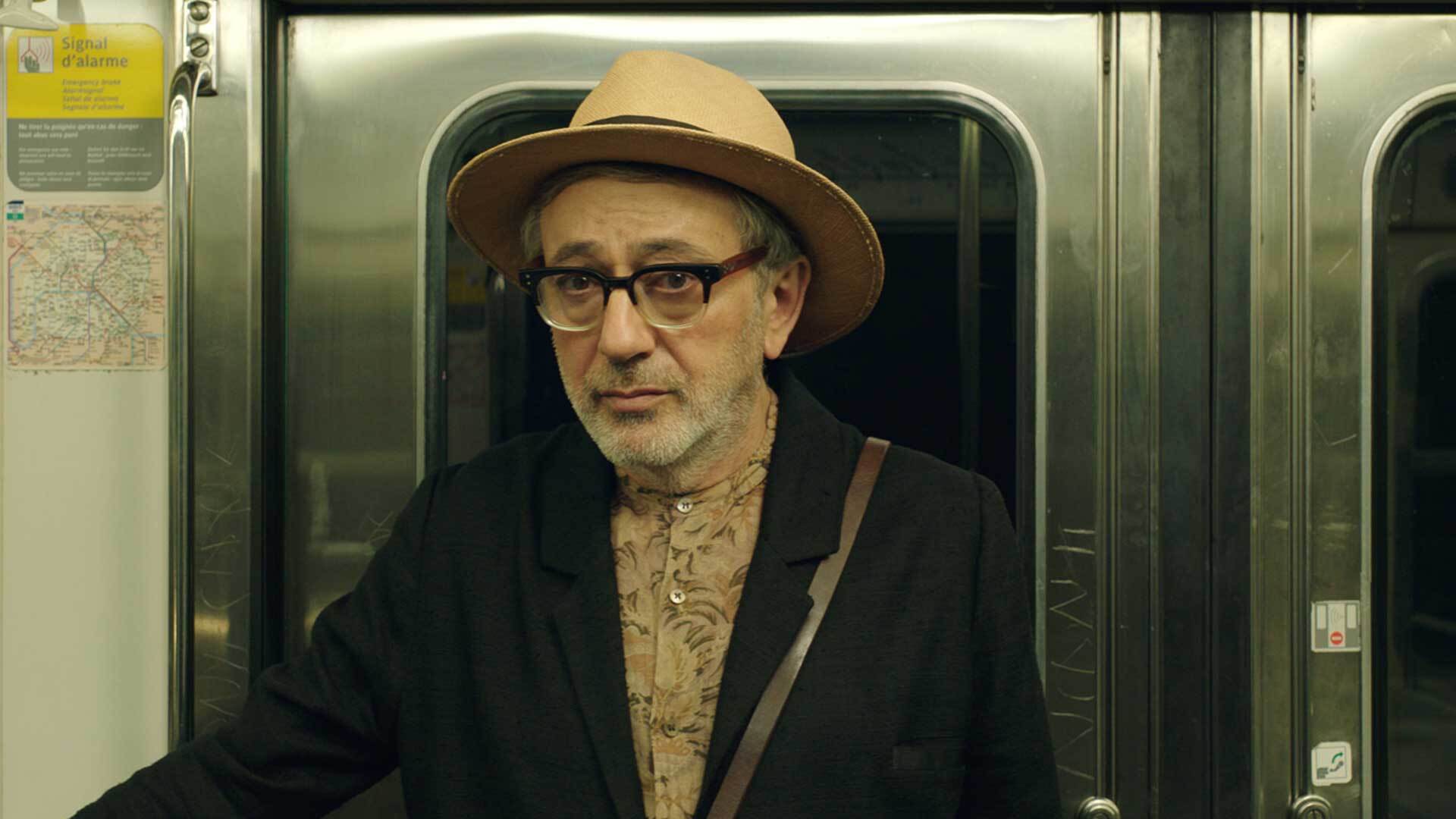 The silent protagonist is also a choice that is part of his overall aesthetic, which is in the tradition of Charlie Chaplin, Buster Keaton and Jacques Tati. Not a bad trio to share a sentence with. It's a recognition of the physical nature of the performance that comes from not being able to speak, and that the films have a huge social dimension, commenting on the world around him.

Fortunately, on Zoom, the director is far more talkative than he is on screen. He says that his standard answer on why he chose to centre his films around a mute character is that ‘it came about organically.’ But that seems almost impossible to believe for a director who describes himself as "an auditor." ‘When I write and see a sentence, I wonder why it is there? What is it trying to say? Do we need it?’ he explains. ‘And why I don't need it, I think it's because of some weakness in the narrative. Evidently, when I saw some of the dialogue of the main character that I put into my first script, it was something that could go.’ 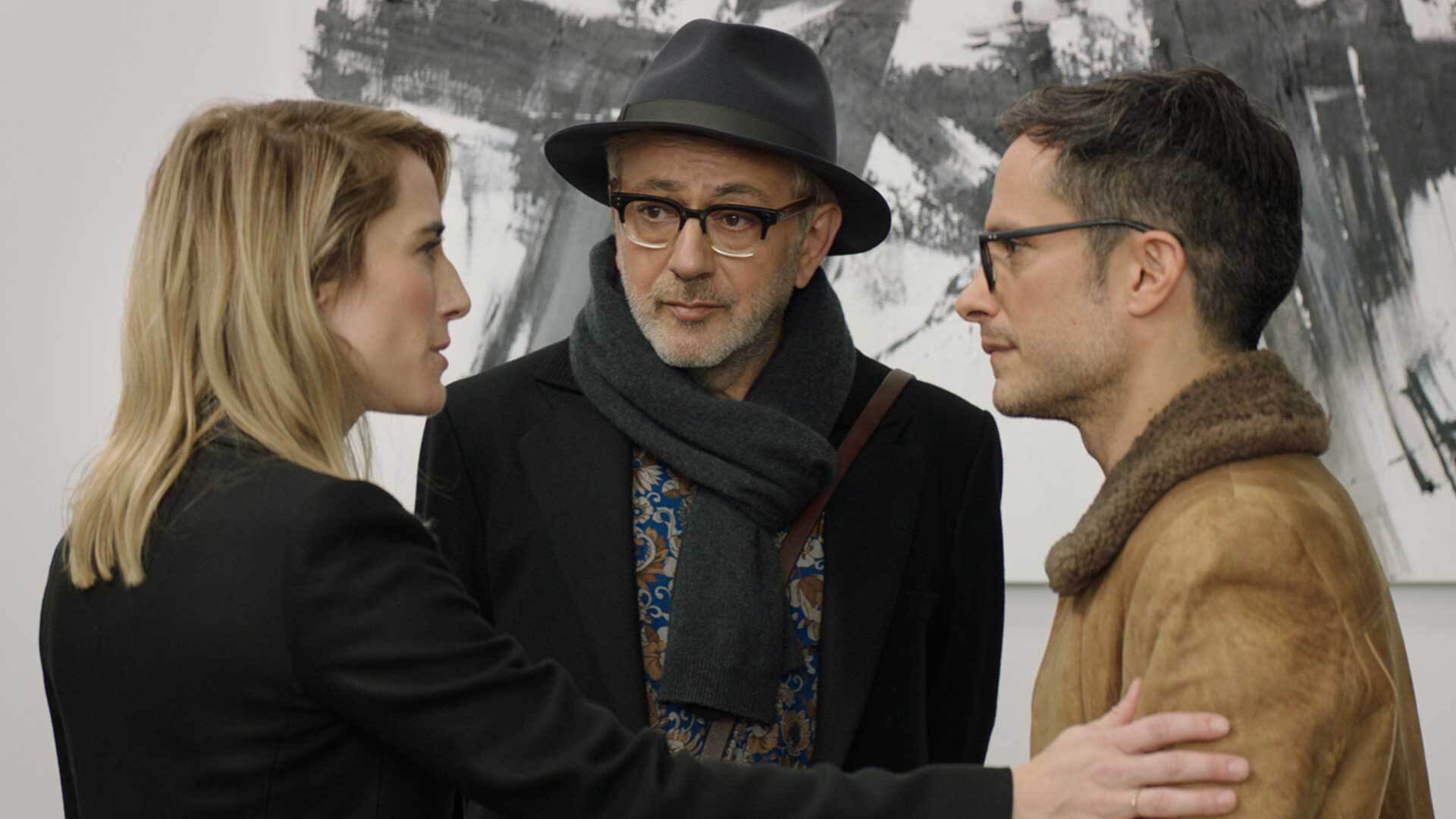 He is a great believer in film being a visual medium. So often words slow down a movie, and exposition reduces tension. To overly direct an audience to one specific part of the frame through dialogue or a character's action reduces a vital part of the movie-watching experience: bringing our personal experiences to the film. We interpret films through our own circumstances, and when we have time to reflect and breathe while watching and observing what is happening in the frame, it gives what is happening on screen a different flavour.

By eliminating dialogue, Suleiman says, ‘The frame will open up, because I'm saying look, but you can look where you want. I'm not the authority on where you should watch. So by my character saying something, I would take away from what I want, which is granting the spectator their complete space to choose.’

It Must Be Heaven is now showing in Cinemas
Book Now

He adds, ‘When I analyse it, it's powerful because the unsaid leaves people to their own intimate understanding of the world. So I'm happy with this non-speaking. Except, for example, I spoke two words in It Must Be Heaven, for which I have no regrets about because it was not really speaking; it was a very political stand to say "I'm from Nazareth and Palestinian."’ Suleiman's alter ego leaves Nazareth for Paris and New York, hoping to persuade producers to fund a film he has written about the Palestinian conflict. On his travels, he sees that cities worldwide have their own stories of the haves and have-nots. For example, in early morning Paris, the only people he sees are black cleaners. In New York, everyone is carrying a gun.

In all of this aural commotion, there is a visual theatricality to Suleiman's performance that comes from not speaking. Suleiman has a great range of quirky facial expressions and those bushy eyebrows that seem genetically designed to be raised. Yet while the character – who always wears a hat and a three-quarter-length coat – is inherently quiet, the same could not be said of the world around him, which is loud and noisy. 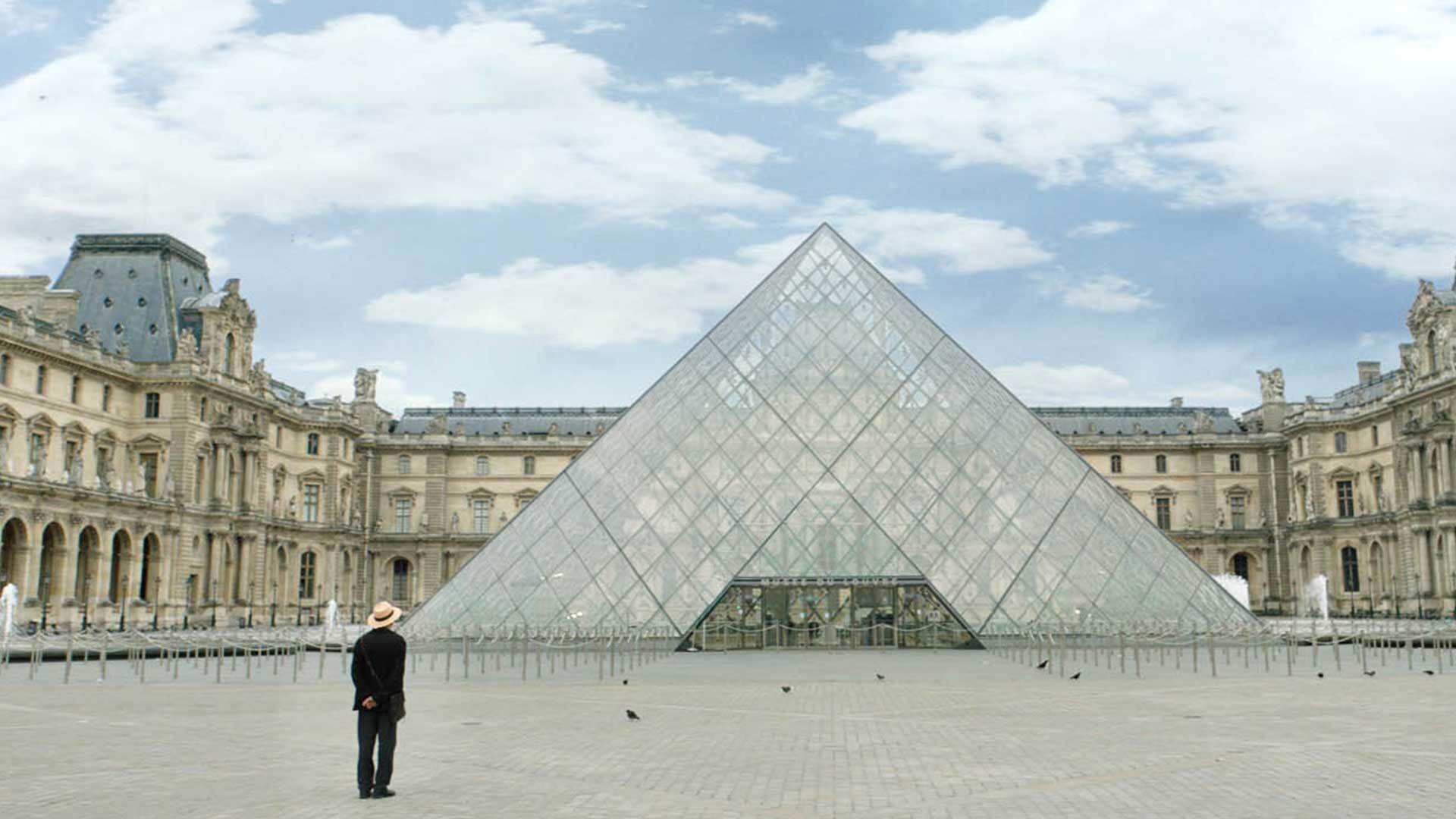 When the central character is consciously not speaking, the atmospheric sound becomes even more critical to the movie; ‘When I'm mixing my films, the mixer is usually overwhelmed by the number of tracks I want to put in,’ says Suleiman. ‘You have this spiritual jungle of sounds. I think it enhances the imagination of the spectator. When one is silent, we hear so much noise. So it's the same thing.’ His soundscape is heightened. He veers away from making the sound realistic because ‘I am thinking about how we can tell the story through sound. Quite a bit of what I do is gags, kind of burlesque. All the humorous language that comes from the sound is essential for my films to succeed. The orchestra can be limitless, so you really have to compose the sound to work with the visual image.’

Creating gags with sound is evident in the film. E. S. is bemused to see electric scooters everywhere on his travels, and they make a screeching sound that is not true to life, but designed to infuriate the audience, creating empathy with what Suleiman's alter ego feels. ‘So often gags are made from repetitions,’ says Suleiman, ‘It happens, once, twice, then maybe the third time something else happens, and it's a release. The sound gag has to have all these elements that make jokes so communicative and universal.’

With the electric scooters, he distorts the sound to create a joke: ‘I don't look for what the sound is. I reference the real sound, but then after that; it's finding the right sound for the image, not the sound of reality. And that sound has to be creepy enough for the humour. You're looking for a sound that is teasing, that makes you giggle, not the real thing. Then, depending on the reaction you're after, you metamorphose the sound of the machine to be either pleasing or displeasing.’

Similarly, he plays with the sounds to reflect each of the cities that his character finds himself in. ‘If you listen to the real sound of Nazareth, for instance, in comparison to the sound I use in my films, it's basically an imposition. I block out all the real sounds in the town in order to shoot, I send people to tell residents to be quiet on their balconies and the cars to stop their engines so that I can start to record. I think the reason is that you always reorder what you feel is chaotic in the hubbub. In New York, the hubbub is so humongous that you don't even hear it, so you focus only on the sound in the film. For instance, in the supermarket scene where everyone is carrying a gun, what you hear is the clanking of all this metal. I think all filmmakers do that – first you start on a blank page, and then these singular sounds start to enter, so you forget the reality of the sound of New York City.’ 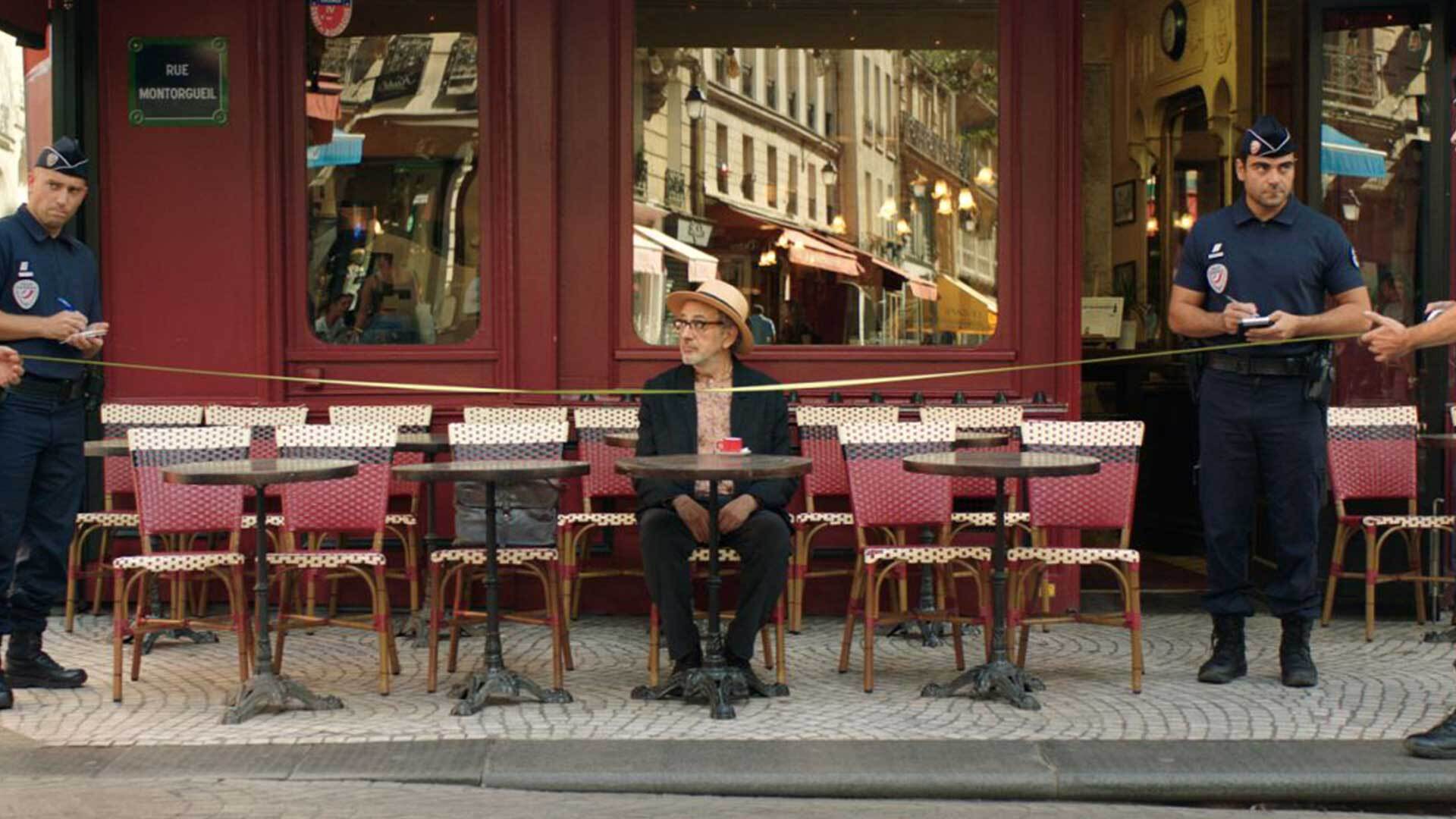 For one scene in Nazareth, he says, ‘I remember including one bit of real sound from the recording on the day, and it took me a long time to accept that sound. To me, it seemed too real. And when it's too real, it stops being too interesting for me. I usually prefer just inventing, the sounds of the cities don't usually enter my films. I prefer inventing.’ He also uses sound to preview the action. 'It's like a radio show, you hear a trumpet but it's around the corner, so you do not hear it very well because of all the other noises. Then you hear somebody laughing and clapping and start to visualise that. So you start to have a story, which is put in some kind of an order by your ears.’

With all these aural and visual pleasures, it’s little wonder why Cannes sees him as the Arab world’s preeminent director.