James Gray: ‘Cinema is the Closest Thing we have to a Dream’

The Armageddon Time director opens up about plumbing his childhood for his cine-memoir, and his abiding love for motion pictures.

Nearly every time James Gray makes a film, critics remark that it is his ‘most personal to date’. And not without reason. Ever since his 1994 debut Little Odessa – a portrait of his mother’s death with a crime-thriller spin – Gray has mined his own life for his resonant family dramas, which remain astonishingly intimate whether they’re set in New York’s outer boroughs (The Immigrant, 2013) or outer space (Ad Astra, 2019). His latest, Armageddon Time (2022), is a homecoming in the most literal sense. Taking place in and around the working-class neighbourhood of Flushing, Queens, where the director grew up, the film transports viewers to Gray’s 1980s childhood, where his on-screen stand-in Paul (Banks Repeta, a  boisterous sixth grader) gets into all kinds of mischief with his best friend Johnny (Jaylin Webb), much to the frustration of his disapproving Jewish parents (Jeremy Strong and Anne Hathaway). Here, Gray opens up about his schooling, love of movies and coming to terms with the fallacy of the American Dream. 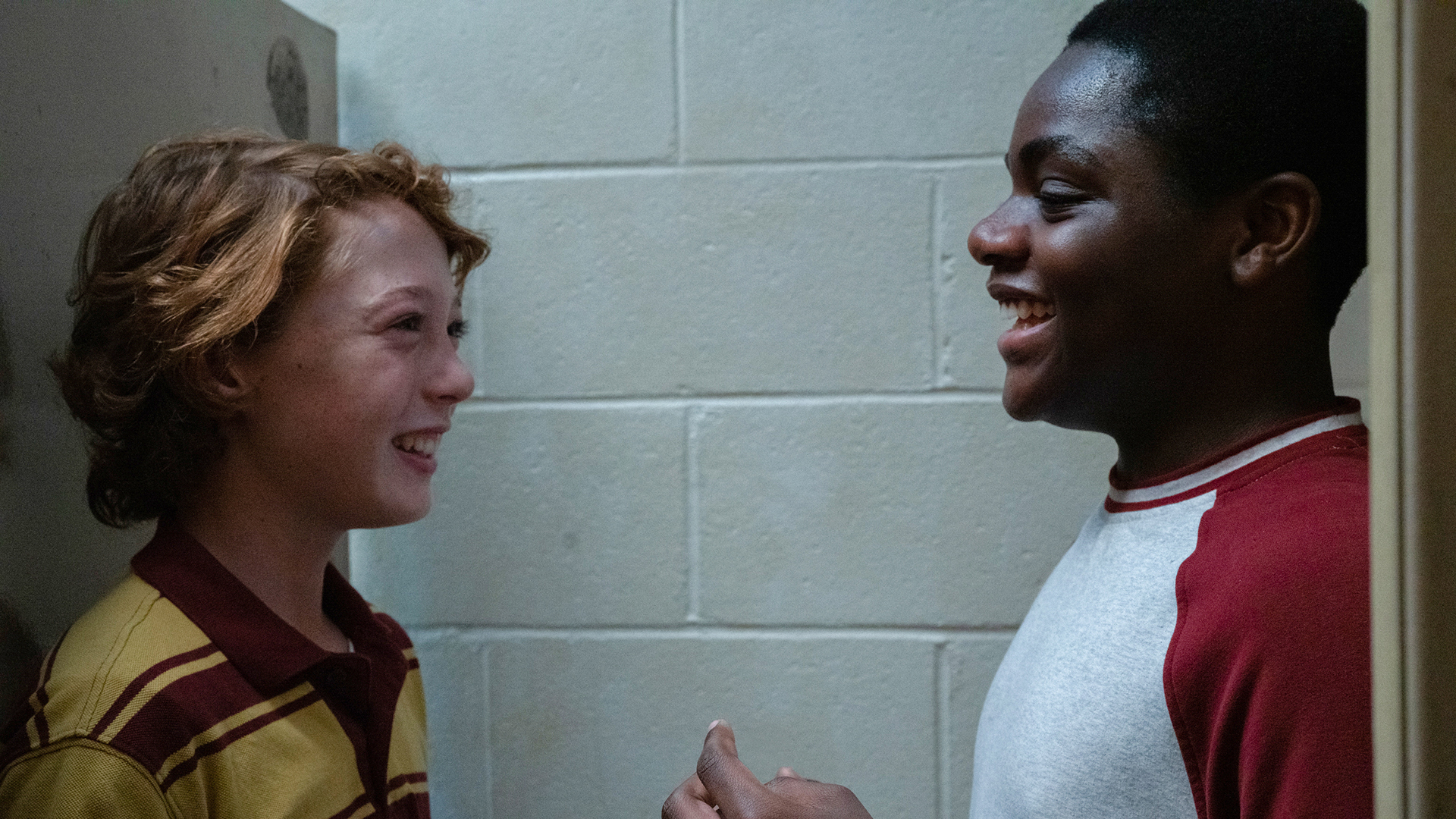 YASMIN OMAR: How did it feel to recreate your childhood for the screen – to see actors playing yourself and your family members, but also to meticulously render the home you grew up in?

JAMES GRAY: In the 1970s, there was a Beatles cover-band show on Broadway called Beatlemania, and I remember the slogan of the commercial was, ‘Not the Beatles, but an incredible simulation!’, which, of course, was ridiculous. Making this film felt a little bit like Beatlemania because we were shooting 90 feet from where I grew up, in front of my public school and in all these familiar locations. You sort of see your family – it’s not, but it sort of is, and looks like them and talks like them. It’s very strange. It only really hit me once I entered the editing room. I was thunderstruck by the footage and overwhelmed almost with a feeling of melancholy.

YO: I appreciated the film’s tone, there’s a warmth to it but also a certain prickliness and darkness at times. How did you nail that down?

JG: Thank you for saying that. It always starts with the idea of warmth. To me, the most important thing to communicate was a feeling that, no matter how flawed and screwed up these people are, love does exist between and among them. And that gives the film enough warmth, so when you have to embrace the darker, more uncomfortable aspects of life, you realise that it is all filtered through this idea that people are only trying to do their best in a hostile world. You do get a lot of runway in introducing darkness once you establish that feeling of love, because the audience knows you’re not a cold son of a bitch. 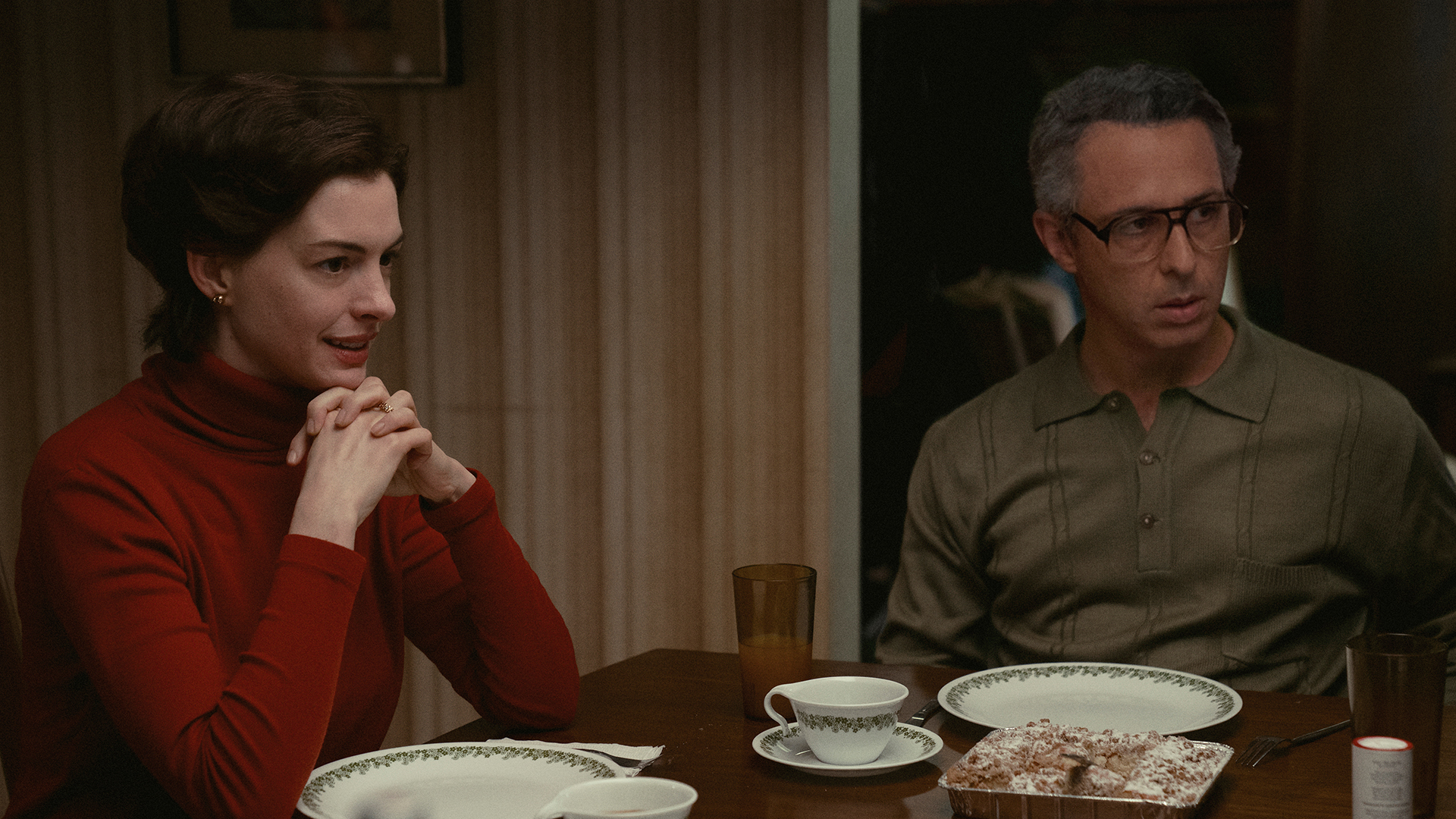 YO: Armageddon Time is mostly grounded and naturalistic, but there are scenes where we fully enter Paul’s imagination, like when he daydreams his drawings are being shown at the Guggenheim. It’s an interesting stylistic departure – can you talk me through your decision to include this more fantastical sequence?

JG: I felt it was necessary because the kid is delusional. When I was that young, I remember thinking I was gonna get a big prize for being the best kid of all time, and so I wanted to communicate this idea. Not only was I in the Guggenheim, but my superhero art was gonna be the best art in there, and why wasn’t everybody recognising my genius? The truth is the world will tell you otherwise; it was a form of education that I had. I just felt that you needed to get inside of the kid’s head a little bit.

YO: Another way to get inside someone's head, which doesn't appear in this film, is voiceover. I was wondering what your relationship is with it now? Because I read you weren’t happy with the voiceover that the studio added in Ad Astra and The Weinstein Company tried to force it upon you for The Immigrant.

JG: Well, on The Immigrant I had final cut, so I didn’t put it in and I could tell people to piss off and really be candid. Let me be clear about this, Ad Astra was always intended to have voiceover, just different and much less of it. When you’re working on a big studio film – where they spend money, and it’s a big star and all of that – your voice is not the most important one in the room, and you find yourself in a battle to convince others of your taste and your ideas. Sometimes you win, but sometimes you don’t. On this movie, I never thought about voiceover at all. You want to try to make the film work without, particularly if it’s a kid because kids don’t have the wisdom. They’re like happy idiots. But the times when voiceover for children works brilliantly is when it’s adults narrating their childhood. Or, in the case of something like Terrence Malick with Linda Manz in Days of Heaven [1978], it’s the child ruminating about the actions of the adults. It's a very different thing. So I didn't feel it was necessary here. 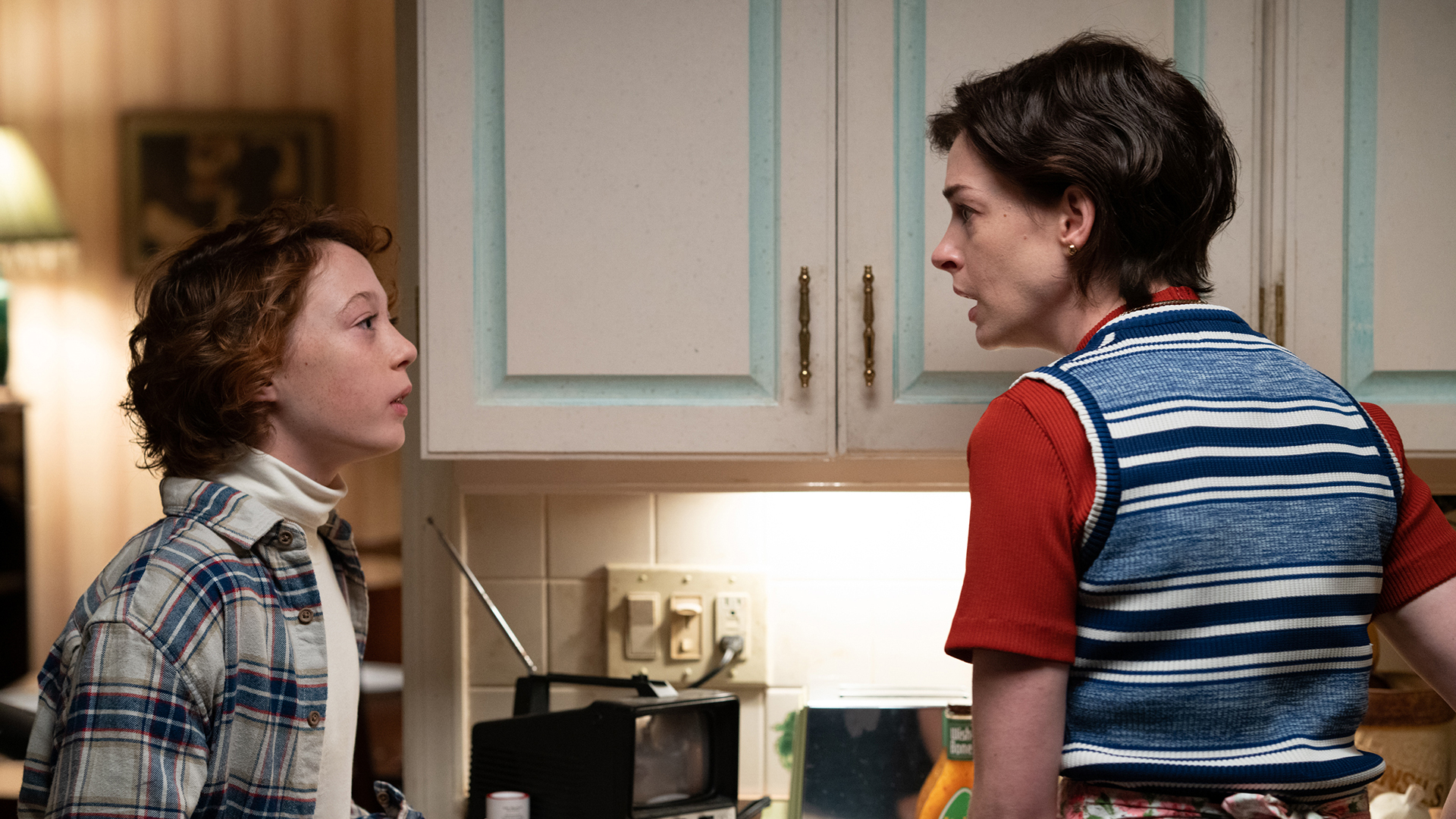 YO: There’s an affecting speech from Paul’s grandfather (played by Anthony Hopkins) in Armageddon Time where he talks about America being ‘the land of dreams’. What does the American Dream mean to you, and do you think it meant something different to your parents?

JG: It certainly meant something different to them. I think that my parents felt more acutely the struggles of Europe and the battle against the pogrom and also of course against Hitler. They regarded the American Dream with a bit more positivity because their lives were not directly threatened in a way that they might have been in Europe. I think it had a more tangible quality to them.

I feel any society that’s at all successful needs a myth to guide it. And I would say that’s the myth of American life. Work hard, play by the rules and you too can be a big success. But is it true? Not really, not for most. In fact, the United States has the second worst record on social mobility behind the United Kingdom of any country in the industrialised world. So you realise that, yes, it’s a lie, but it’s also a necessary lie. In other words, it’s a lie that propels us forward. And maybe part of the struggle that we face is that there are just no longer enough examples of its truth in order to sustain us. Corporations have so much power now. And there’s been such a hoarding of wealth at the very top 0.0000001% – not 1%, it’s even smaller than that – and the American Dream feels under threat. I think that that’s bred a lot of hostility in American life. 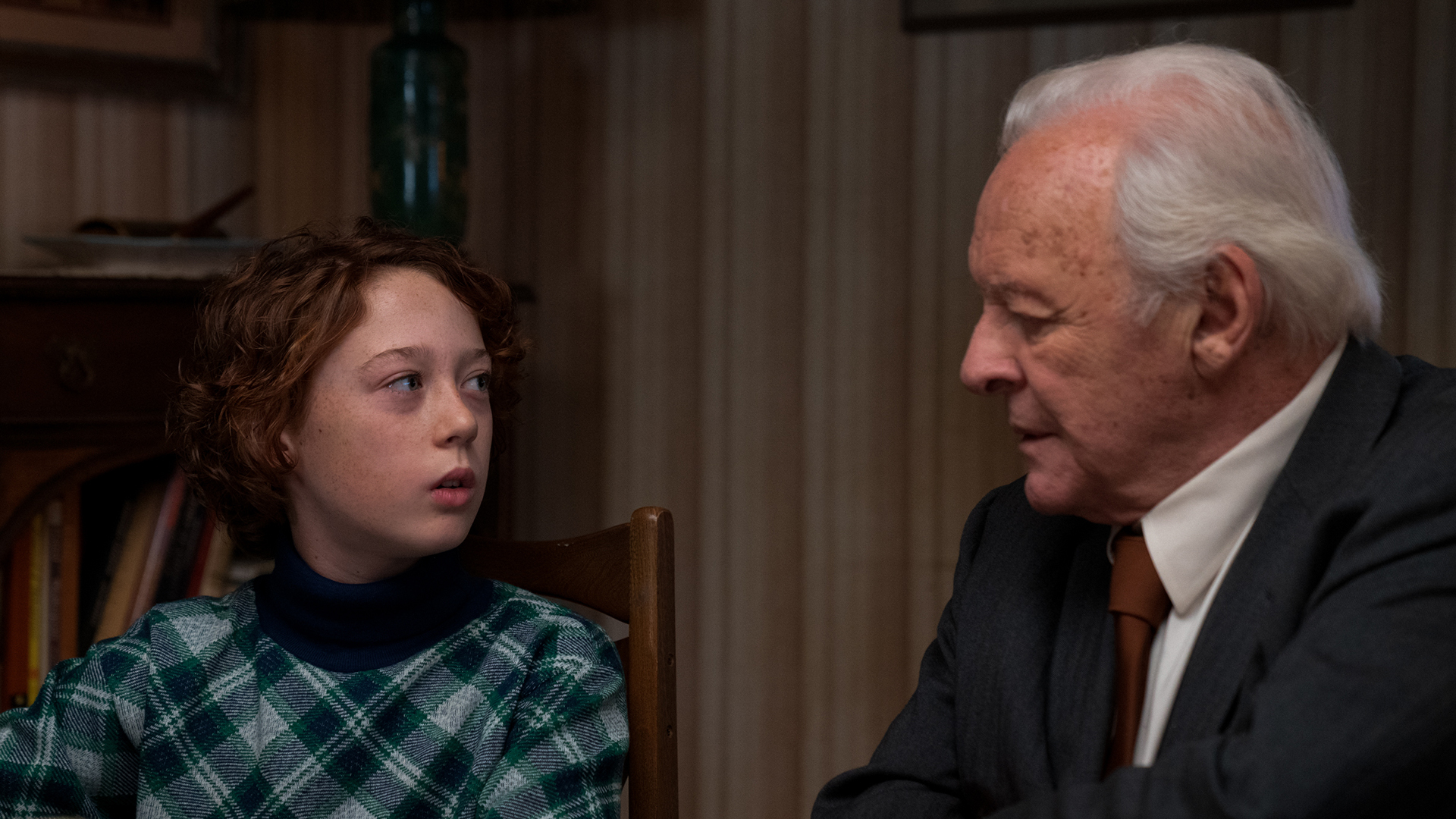 YO: I found the film critical about the education system of the time: the state school Paul initially attends isn’t equipped for so many students, and the private school seems to drum a sense of entitlement into these already privileged kids. How do you think both of these institutions shaped you?

JG: Well, it’s like Michel Foucault said: school is prison with another name and for another group. My own experience in the public-school system was brutal. In fifth grade, there were 46 kids with one teacher. In the film you see probably about 38 kids in that class. We couldn’t get more because they wouldn’t fit once you put the camera and the crew in there. That tells you how packed the room was. There was just no chance for individual attention, and it’s why you could cut out from school and leave the Guggenheim and go to Times Square and nobody would get in trouble. They didn’t do headcount. I mean, there’s too many kids.

In some ways, the institution starts giving you a message that you don’t matter. And it was even more acute for characters like Johnny. It’s not even about insulting him directly, although the teachers did do that; but it was saying ‘you just go in the back, we’re gonna forget about you’, which in some ways is worse. In private school, I got a better formal education, there were between 16 and 18 kids in my class, but there was a lack of creativity as a result. It was a militaristic idea of education. I just tried to take what I could from it. As Einstein says, your education is what you remember after you forget everything that you learned in school. So I’ve just tried to forget about my formal education as much as possible. 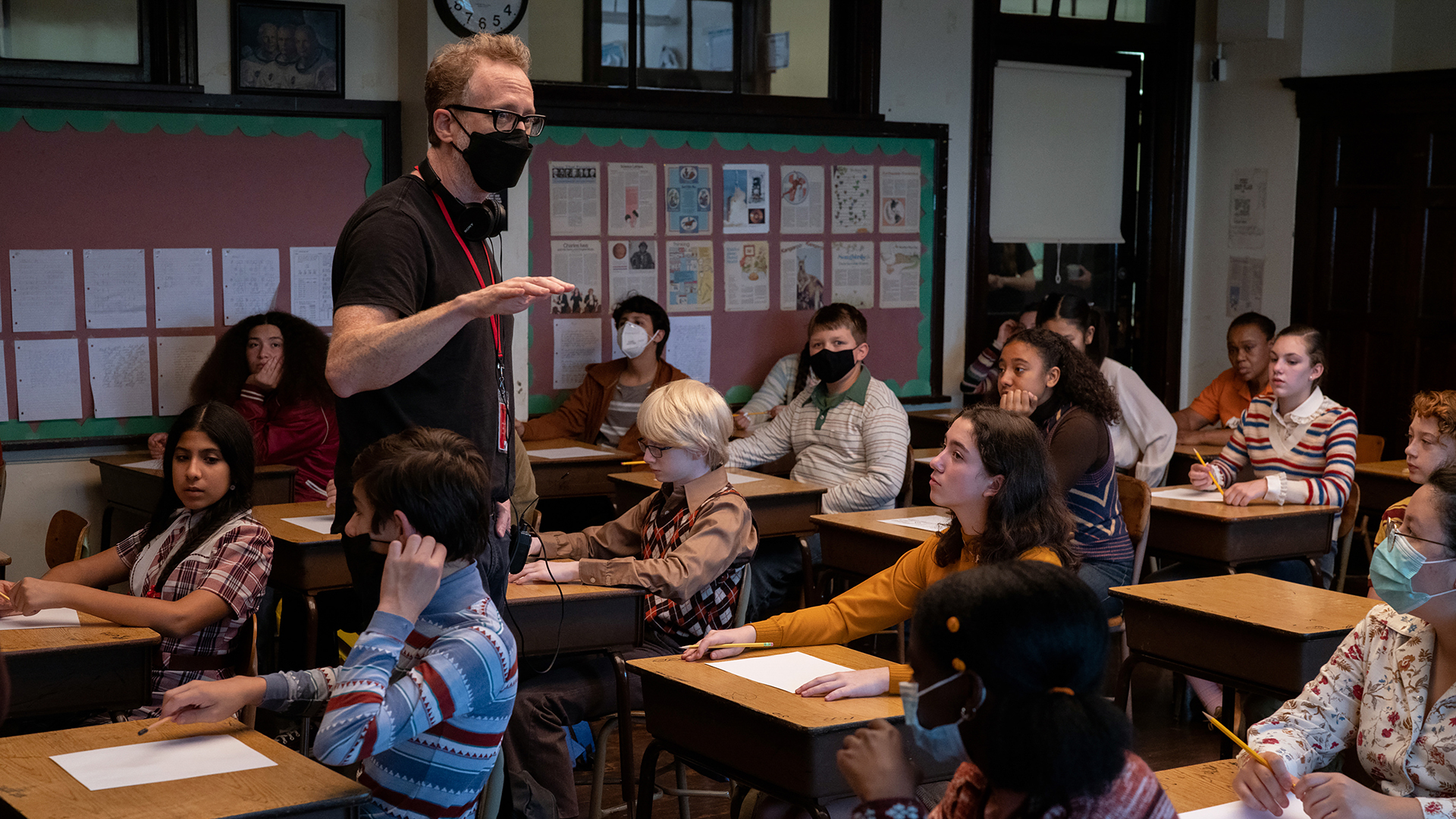 James Gray on the set of Armageddon Time

YO: I read that part of the reason you made this film was to remind yourself why you love movies. Did you succeed in that?

JG: In that one way? Yes. I didn’t get emotional closure or have answers or any bullshit like that, but I certainly love movies so much. To me, cinema is the greatest art form that the human race has ever invented. If you think about it, they estimate the cave paintings of Lascaux are 38,000 years old, so for 37,500 years, they didn’t really have perspective. And yet with cinema, five years after the first sound picture – which they say is The Jazz Singer from 1927, even though that has stretches of silence but fine – you have an absolute ocean of masterpieces made by great artists.

That tells you that the human race needed cinema, and had been saving up all of its collective artistic energies for centuries and centuries, looking forward to it without knowing it. Look at the triptych paintings by Bosch at the Prado. He’s searching for something past the canvas. Look at Wagner’s Der Ring des Nibelungen [1869]. He’s trying to step outside or beyond opera, he’s reaching for something that doesn’t exist yet. Cinema combines all the art forms – dance, photography, theatre, painting, music – and it’s the closest thing we have to a dream. It’s the closest thing we have to stepping inside someone else’s consciousness. What a gift.