Where is My Mind? An Observation of Apples 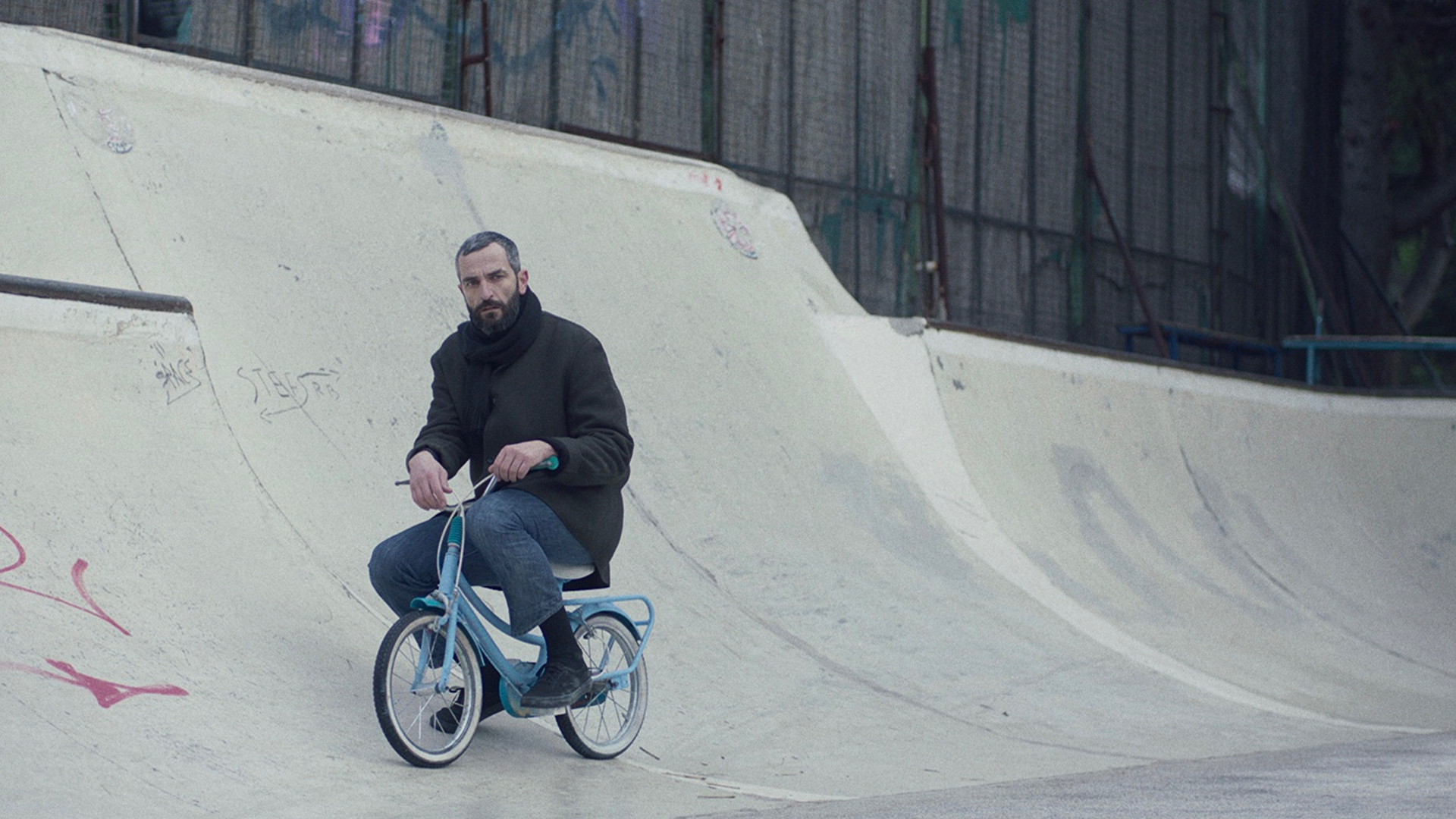 Christos Nikou’s extraordinary journey into what has become an all-too-believable alternate reality isn’t so much a vision of a world afflicted with a strange pandemic than a wryly observed manifesto for existence when such an occurrence takes place, suggests Alasdair Bayman.

Eat. Sleep. Exist. These three simple actions have found resonance with us all over the course of the last year, as a global pandemic fundamentally changed the way we live. And so much has changed, often in the most abrupt manner. The shock of this—along with the impact of it by those directly affected—will likely leave a permanent (if not always visible) scar.

Apples, the directorial debut of Greek filmmaker Christos Nikou, captures all these feelings. It encapsulates life trapped in a world riddled with existential questions around memory, self-awareness and the nature of living. However, the film is less bleakly observational than it is compassionate in its journey through a world re-opening to human interaction, care and attention. 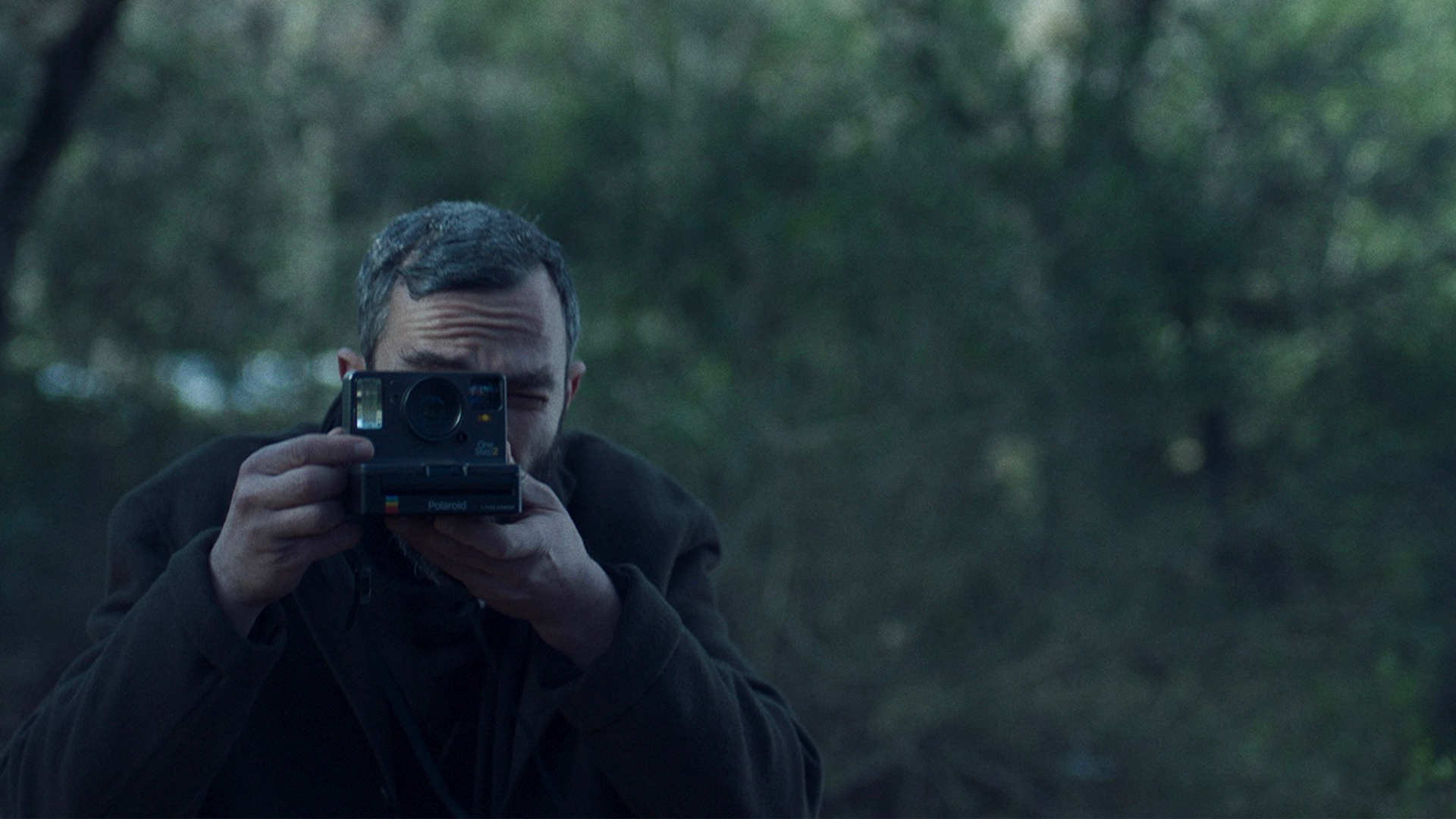 The appearance of what critics referred to as the Greek Weird Wave shone a spotlight on a national cinema just as Yorgos Lanthimos and Athina Rachel Tsangari were cementing their reputation with, respectively, Dogtooth (2009) and Attenberg (2010). The films garnered international acclaim and subsequent work such as Alps (2011) and Chevalier (2015) have added to the allure of these filmmakers and the movement they represent, with critics exploring the combination of black comedy and absurdism. Apples fits perfectly into this aesthetic, thematically and visually. Yet, the film’s narrative possesses ample redemptive qualities to make it resonate with the world at large, as it is today, underpinning our fragile state whilst also hinting at our continued resilience, and ability to heal and learn. 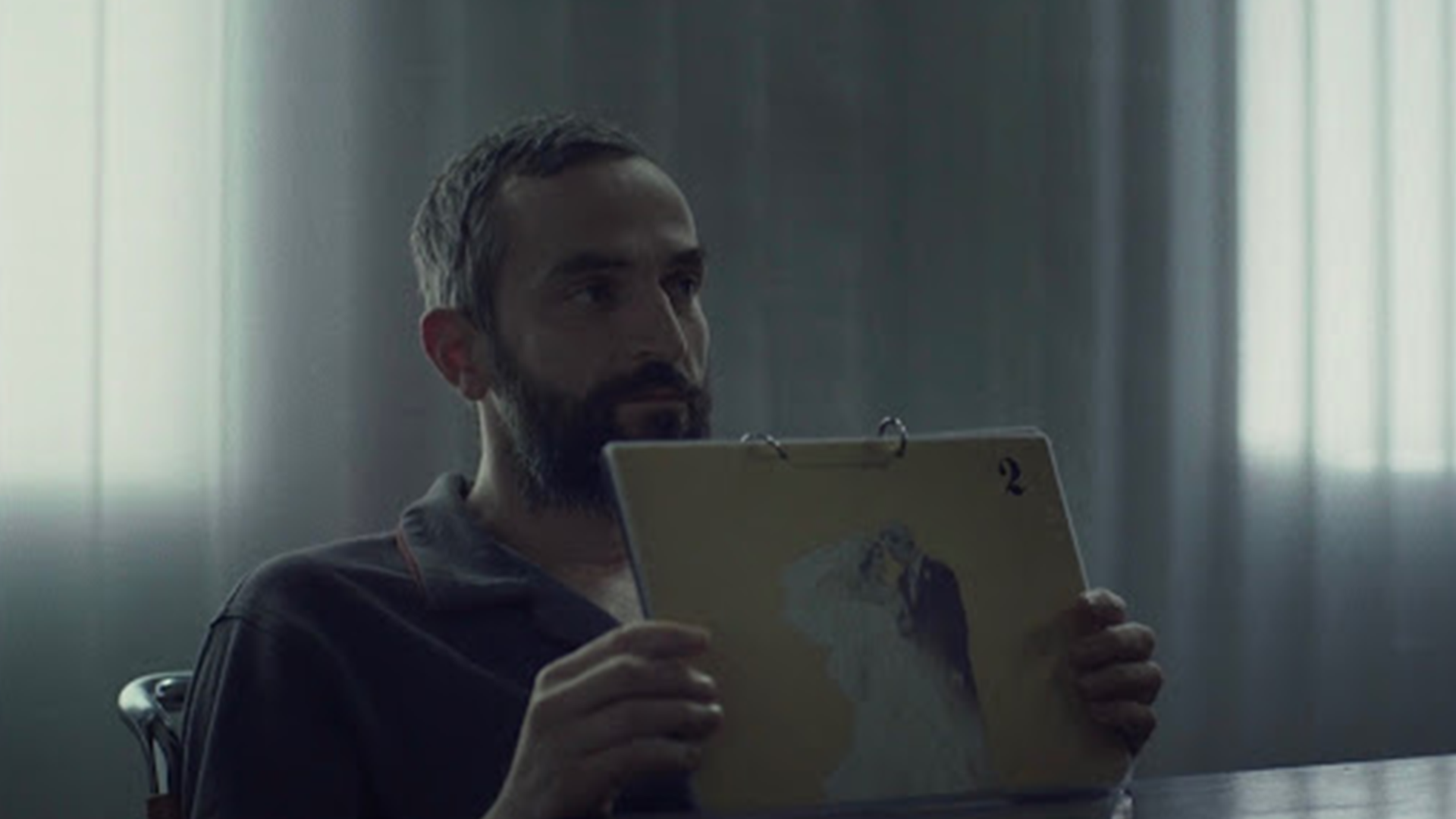 While travelling on a bus, middle-aged Athens resident Aris (Aris Servetalis) succumbs to the sudden loss of memory afflicting so much of the world’s population. He is admitted to hospital and because he has no ID, evidence of residence or living family members, he is assigned a new home, identity and the tools by which he can start to rebuild his memory palace. The world Nikou depicts in these scenes is confined to interiors—muted colour palettes boxed in by a 4:3 aspect ratio. Cinematographer Bartosz Swiniarski employs a style that accentuates the sense of anxiety and claustrophobia. It makes Aris’ new life, beginning with his rehabilitation in the ’Disturbed Memory Department’, feel enclosed from the more active wider world 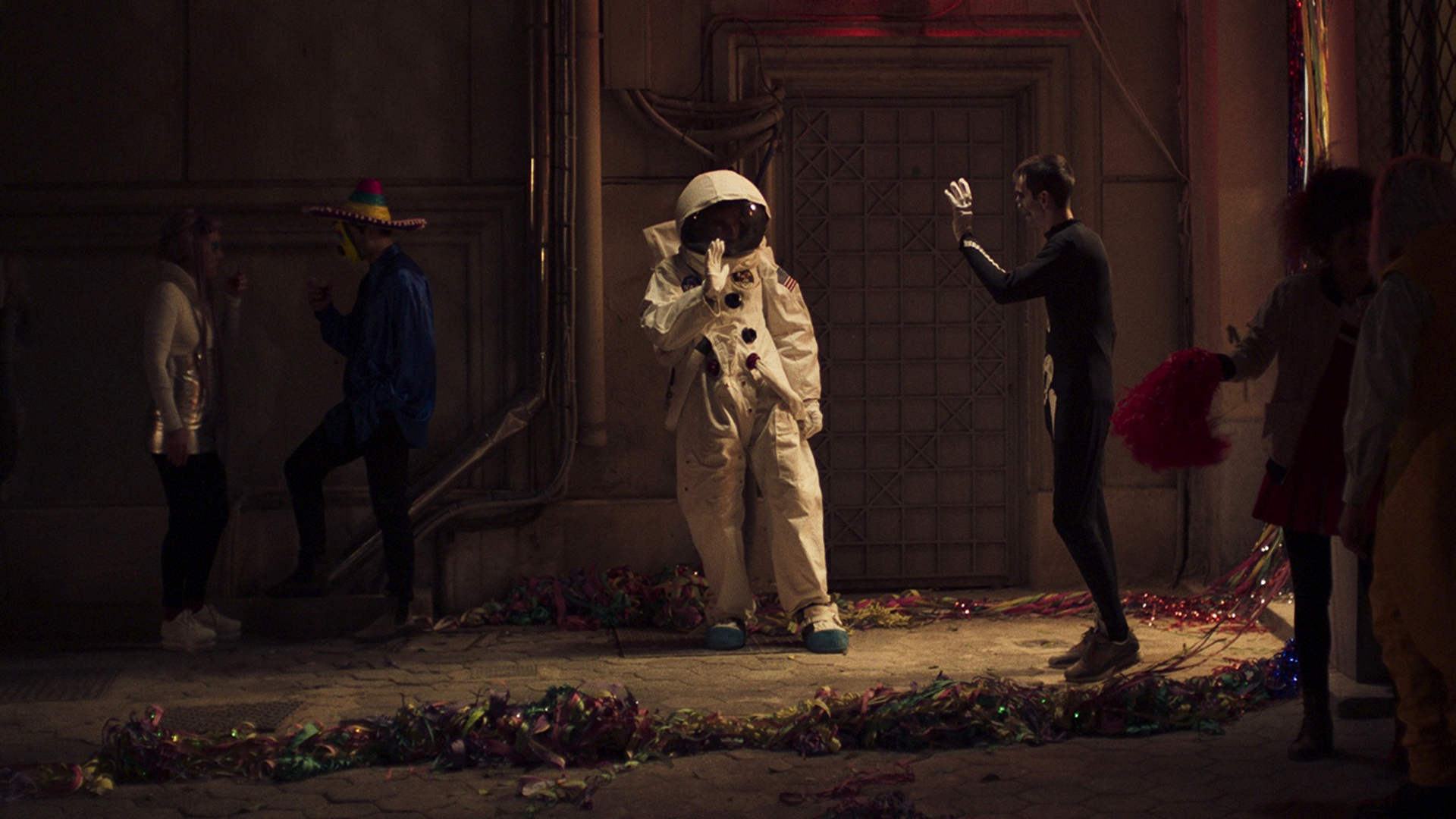 Apples accentuates the sense of isolation through the use of Athens’ Brutalist architecture—hallways that are long and meandering bookended by spiral staircases create a sense of entrapment. These environments mirror the sci-fi world of Andrei Tarkovsky’s Solaris (1972), where an intense feeling of loneliness is evinced through the film’s production design.

The sense of alienation in this otherwise modern world is emphasised through the use of analogue technology. The digital revolution undoubtedly happened, but the characters with no memory are confined to more rudimentary means of communication. There are no iPhones or any other kind of mobile device. But there are manual typewriters and tape machines. There’s no nostalgia for an earlier age here—their absence underpins an encouragement for the characters to find a more ‘human’ form of contact. And with no technological means to communicate, Nikou’s film takes fascination with the minutiae of everyday life. Inner recovery on a psychological and spiritual level is linked to characters’ engagement with a world beyond a screen. Aris gradually accepts this new life, working towards building connections with the hospital staff. 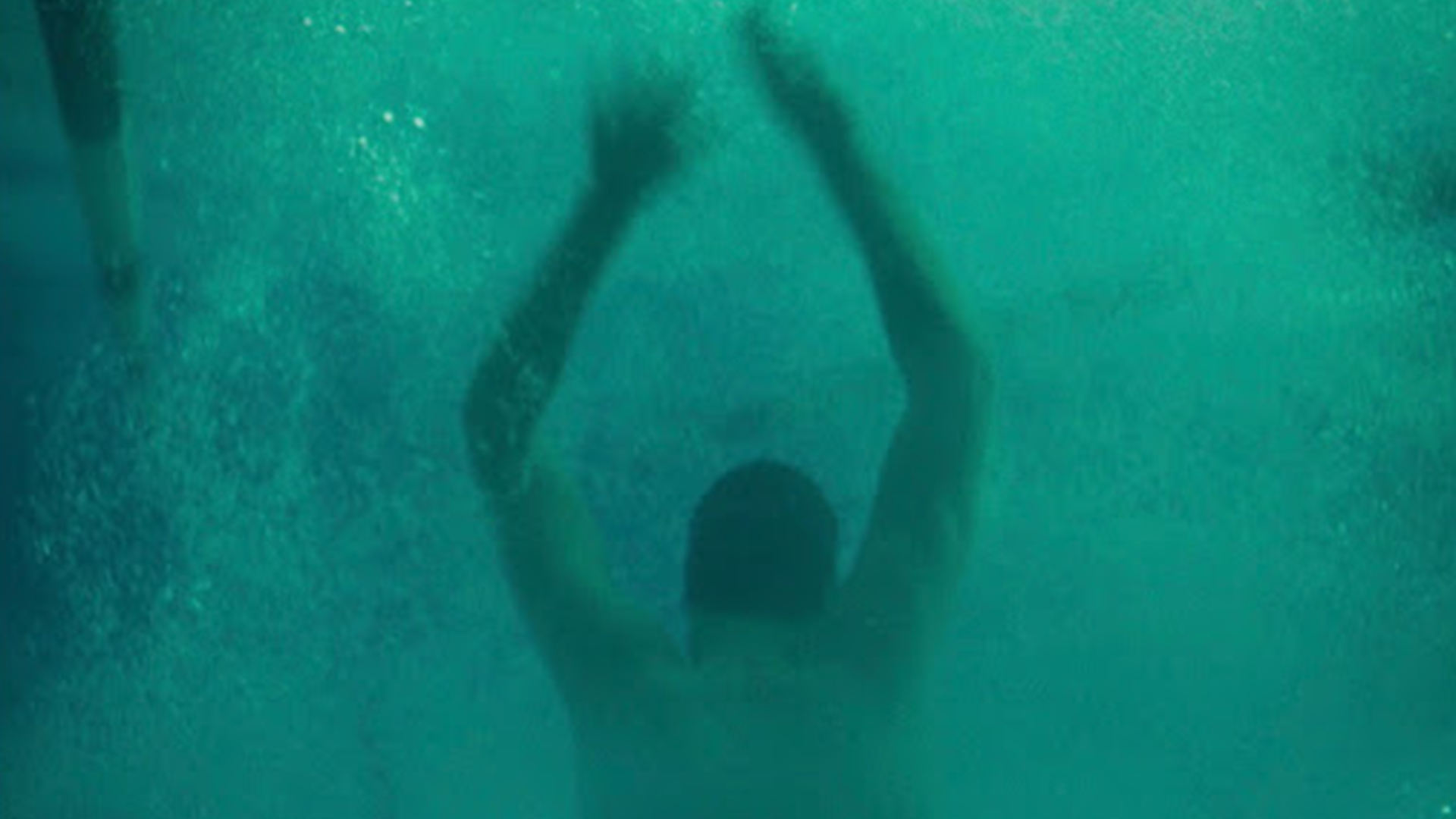 The two doctors assigned to Aris’ recovery within the ‘New Identity’ programme suggest social activities to him; their guidance is less Orwellian than an attempt to find a path back to society for their patient. It’s in this part of the film that Apples resonates with our real-world problem. Nikou draws empathy from observing Aris, a fragile human, negotiating socially awkward situations in public spaces. Nikou appears to be finding ways to present a society that his character can reconnect with, whether it’s visiting cinemas, attending parties, or even learning to ride a bike. To the doctors, every interaction Aris has with the world becomes a fundamental part of his emotional, cognitive and social re-development. Nowhere is this more apparent than in Aris’s encounter with a young child, borrowing his bike and riding around a skate park. It’s one of the film’s most poignant moments and hints at the final act shift where we come to understand the true nature of what ails Aris and why he returns to a more fundamental attempt to connect with the world.

Apples seeks to offer reassurance, a guiding light in arduous times. It questions the very nature of how we define ourselves, both personally and within a wider world. Moreover, it reminds us that knowing who we are is essential in turbulent times. It exists in the way we express ourselves, but also through human interaction and affection.