All the World’s a Stage: How NT Live Brings Filmed Plays to Cinemas

The NT Live team pull back the curtain on how they go about the mammoth task of seamlessly translating the theatre experience to the big screen ahead of their latest production Jack Absolute Flies Again.

It’s a sunny August afternoon at the National Theatre and there’s a palpable electricity in the air. Staff in logo tees are rushing through corridors whispering instructions into walkie-talkies as today is the first camera rehearsal for the delightfully bawdy comedy of errors Jack Absolute Flies Again, which will be broadcast to cinemas as part of the NT Live. Launched in 2009 with the Helen Mirren-starring production Phèdre, the initiative strives to increase the accessibility of theatre-going – a pastime that can be prohibitively expensive, particularly for those outside London – by screening filmed plays from all around the UK to 2,500 cinemas across 65 countries, as well as in schools, village halls, care homes and even a bus that trundles through Scotland. Since its inception, NT Live has gone from strength to strength, sharing reinterpretations on the classics (Shakespeare, Ibsen, Chekhov...) alongside brand-new work (from the likes of Phoebe Waller-Bridge). Suzie Miller’s Prima Facie was the unexpected box-office success story of the summer, and overtook Fleabag to become the UK and Ireland’s highest-grossing event-cinema release of all time. But how does it all work? I was invited behind the scenes at the National to find out. 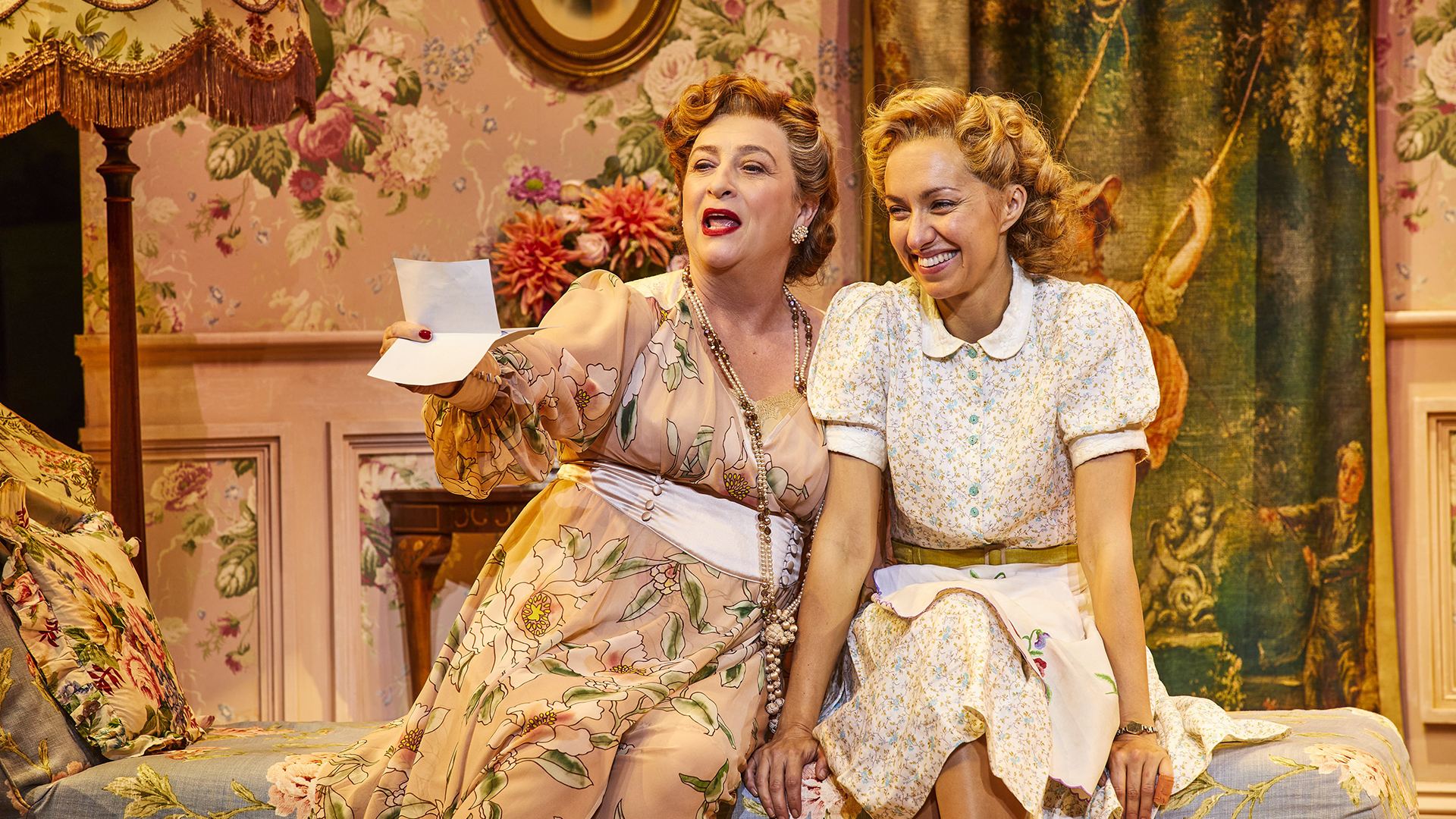 The stage director Emily Burns and the screen director Tony Grech-Smith shepherd the making of Jack Absolute: she is responsible for the creative and practical considerations of staging the show throughout its run, whereas he comes in later to navigate the logistics of filming it. Grech-Smith – who has worked on 11 NT Live productions to date including the James McAvoy Cyrano de Bergerac (2019) and Billie Piper Yerma (2017) – does his best to be as unobtrusive as possible in capturing the performance. ‘I’m not trying to create hero shots or be noticed,’ he tells me. ‘I’m quite careful to be sympathetic to the stage director’s vision. I want to sink into the background and let people get lost in the performance.’

At the beginning of the process, Grech-Smith read the script and met Burns for a coffee so she could share her take on the material. He watched Jack Absolute at the Olivier Theatre later that day, thinking all the while about how to translate it to the screen. Then, he spent ‘a painstaking week’ putting together a camera plan, which meant combing through every moment in the play and deciding how many cameras he’ll need (he settled on seven), where each shot will go and which camera will record it. NT Live’s executive producer Julia Nelson, who has been instrumental in committing all 88 of the productions to film, handed me a massive stack of paper when I visited the theatre. It was Jack Absolute’s shooting script, which had a number next to every line of dialogue that corresponded to the camera that would go on to capture it. ‘How many cuts a show will need varies by genre,’ Nelson explains. ‘This is a fast-moving comedy so there are more cuts than a drama, we ended up with 1,400. On The Seagull, by contrast, there’s no set to look at and no physical action. We started with 800 shots but finished with 200 in the final capture.’ 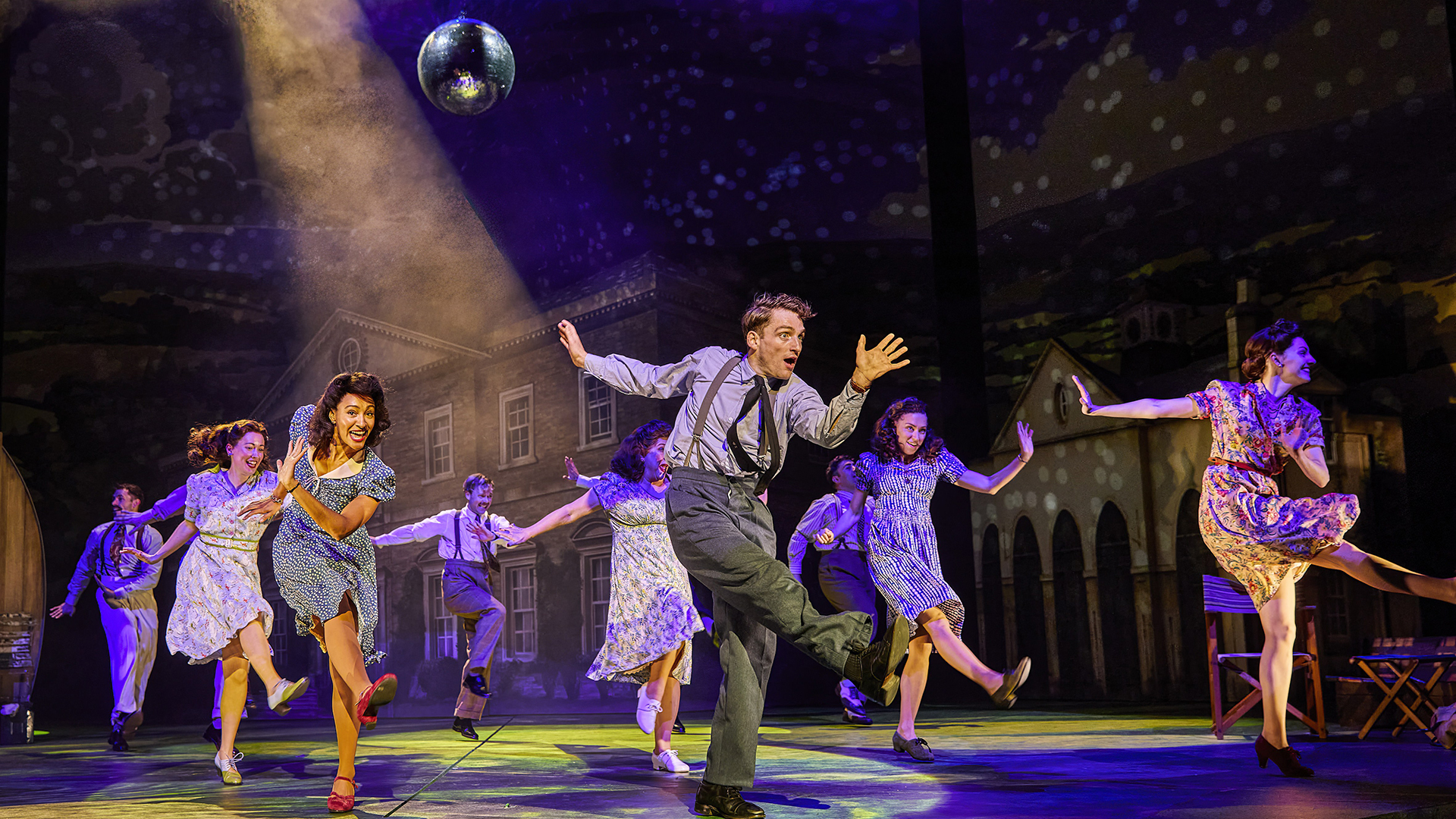 Next up for the Jack Absolute team was a ‘notes day’ when Grech-Smith talked through the shots he wanted with the camera operators before the first rehearsal. An audience is present for this rehearsal and, as they make their way into the auditorium, an overhead announcement reminds them to ‘ignore the cameras and please react to the performance as they usually would’. In the theatre, a number of seats are left empty to accommodate the filming and lighting equipment (this is carefully calculated, Nelson notes, to balance the loss of revenue with the shooting requirements). Grech-Smith and his team, meanwhile, are stationed outside the National in a broadcast truck, looking over their monitors that project a live feed from the Olivier. A stage manager will let them know when the house is fully seated, there’s a 30-second countdown to curtain and it’s finally time to road-test their meticulously laid plans for the cinema broadcast. 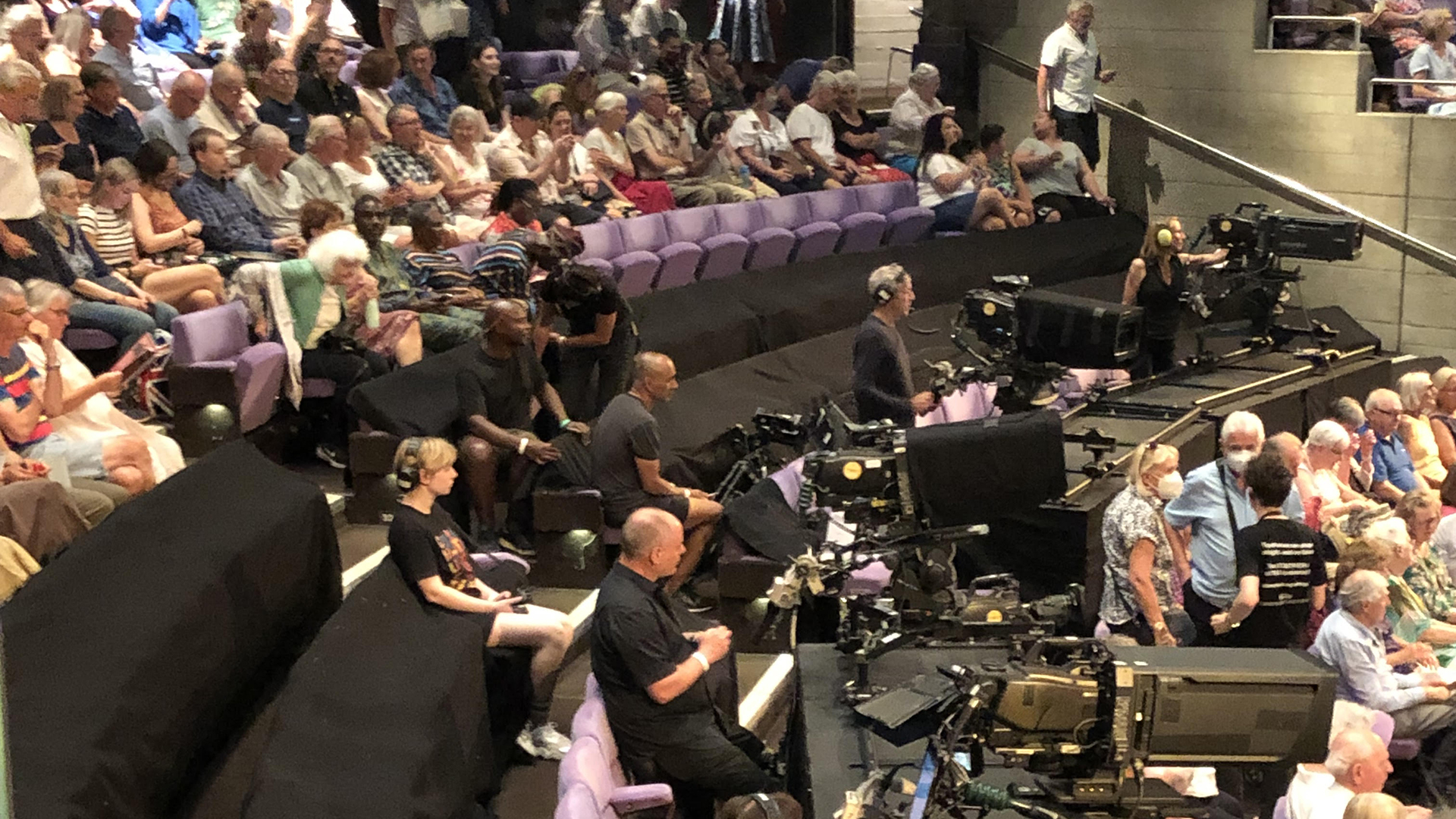 ‘It’s really quite calm, but there’s a certain rhythm to how we deliver,’ says Grech-Smith. ‘It's not like a TV-show rehearsal where I can stop and start. Our rehearsal was what you watched from start to finish, no stopping.’ Inevitably, little issues arise: there might be a cable dangling, the lights could appear too bright or the colour palette may look off. ‘You’re live, in effect, for nearly three hours. Someone’s going to make a mistake somewhere,’ he explains, matter-of-factly. However fastidious the plans are, the director always makes sure to leave room for spontaneity. ‘Sometimes actors go off piste and they might absorb that,’ he says. ‘There was a moment when Caroline [Quentin] took a laugh in Jack Absolute and just let it rest for a moment. I had a close-up ready for the next line, but I said, “Oh no, let’s just cut wide and see this, it’s funny.” I'll decide when we're going to leave the script and when we're going to come back to it.’ 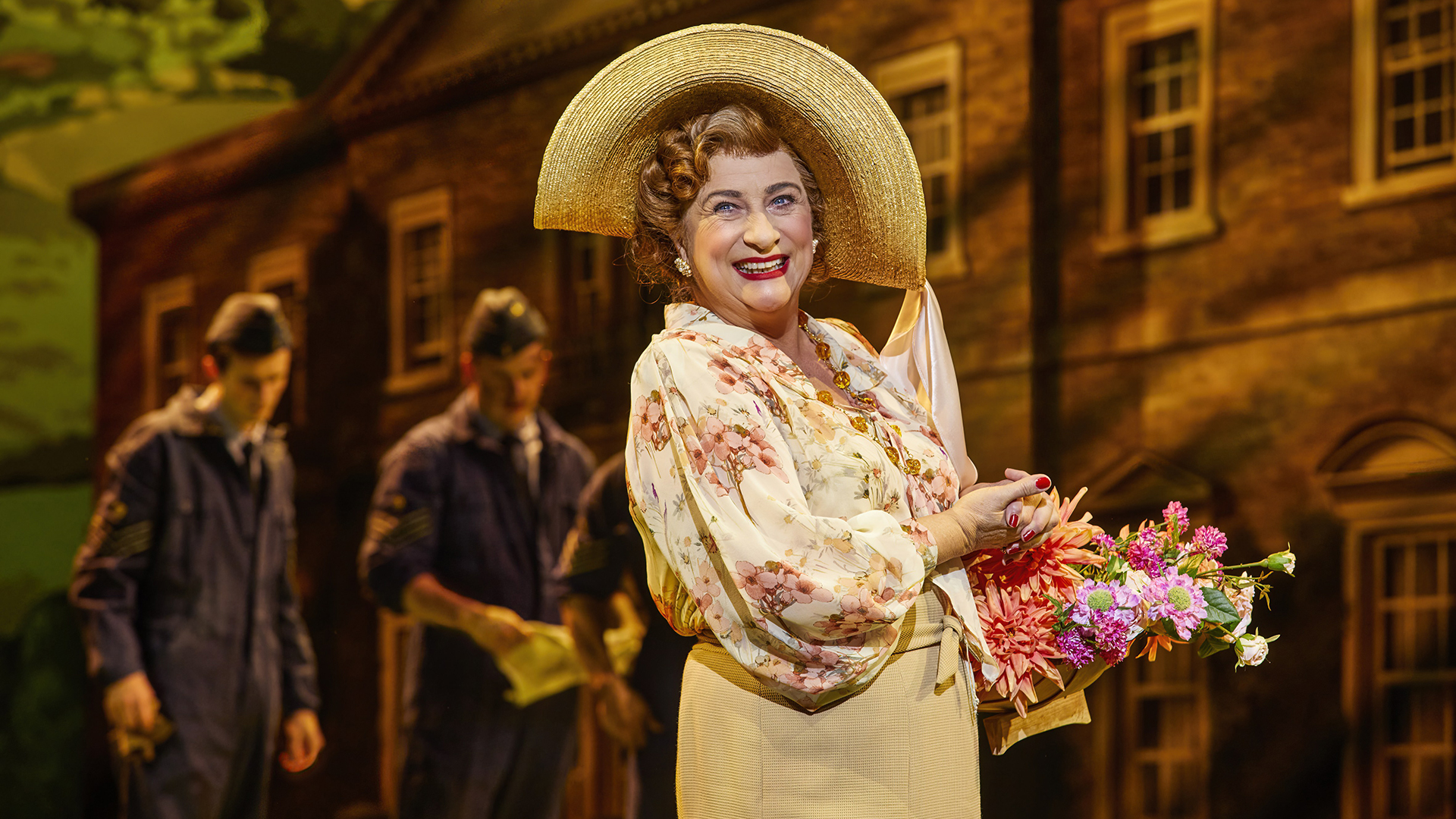 The day after the rehearsal, the two directors – along with all of the department heads – go to a screening room to watch the footage together, and each person points out where they can improve their individual contribution to the show. For example, when transitioning from stage to screen the lines on a wig can look obvious, makeup can seem too garish or sound effects can get distorted, therefore the relevant team member identifies any problems and fixes them ahead of the second rehearsal. There is only one non-negotiable element that will not change. ‘What we never do,’ says Nelson, ‘is ask the actors to do anything differently for the NT Live broadcasts.’ The first Jack Absolute rehearsal ran pretty smoothly. The only slight hiccup was that Kerry Howard (who plays the maid, Lucy) wears a white dress that’s so bright it created a halo effect. ‘The camera can do funny things to pictures so you have to compensate for that,’ Grech-Smith says. Ever respectful of Burns’ artistry, he managed to resolve this issue without needing to switch the costume, although he has had to resort to that in the past. ‘On one show an actor’s jacket had a fine pattern on it that strobed in that moiré effect you see on TV sometimes. And I was like to the director, “I’m sorry, I hate to say this, but he can’t wear that.” We had to find a replacement that was slightly more toned down. It would be a shame for the performance to suffer because we didn’t do something as simple as change a jacket.’ 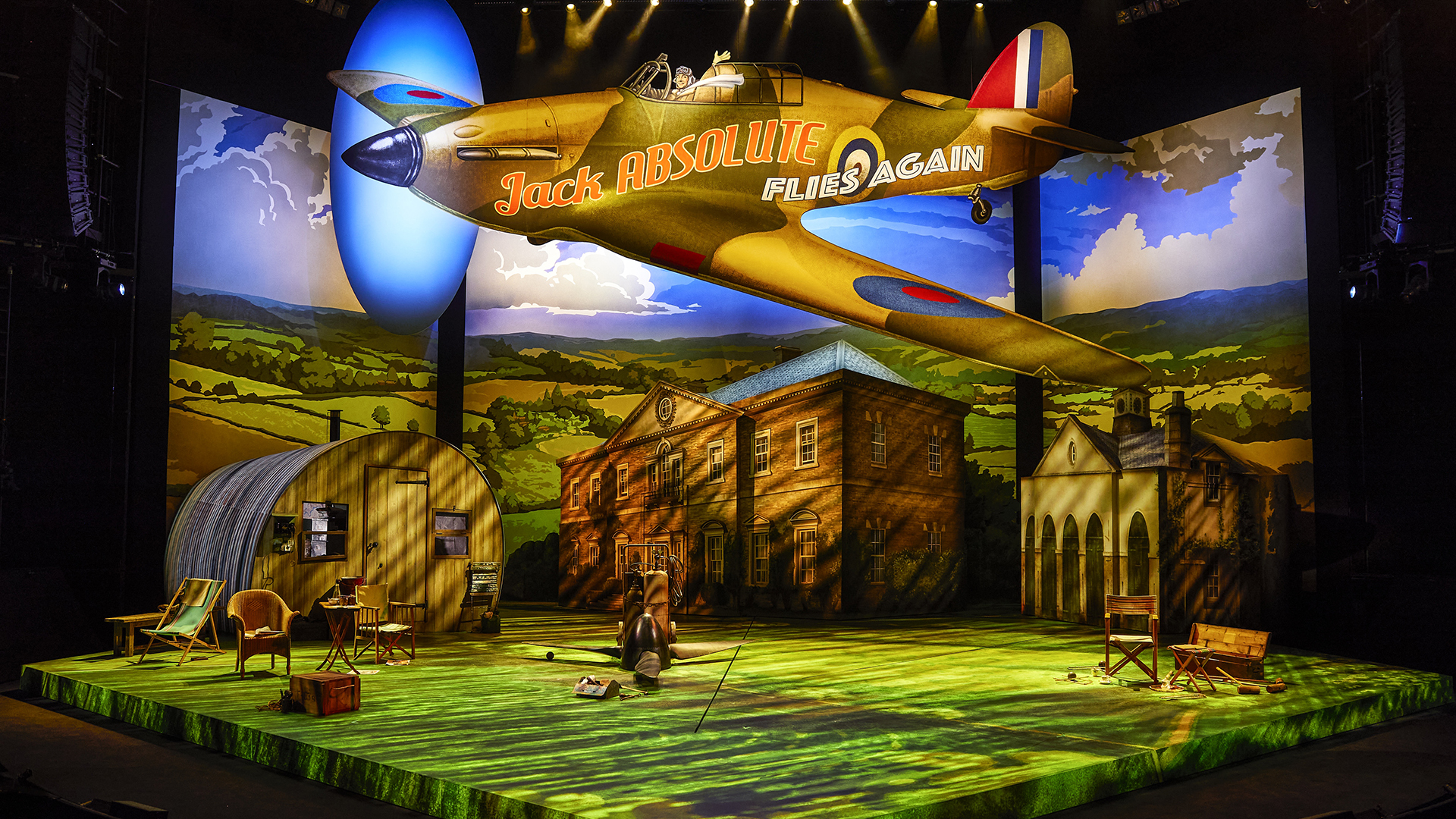 Overall, Jack Absolute was a ‘relatively straightforward’ production for Grech-Smith because the action mostly takes place on a simple, square-shaped stage. Some of his previous NT Live efforts have been more challenging. On Julius Caesar (2018), there were eight hydraulics (moving stage sections) that transformed the setup into a warzone filled with barricades and smoke, which proved tricky to capture; and the revolving stage of 2017’s Small Island never hit the same point twice, making it impossible for the director to guarantee whether a cast member would be upstage or downstage at the same point in the play from night to night. The most complicated sequences on Jack Absolute were the dogfight scenes, where an immersive projection shows the characters’ adrenalin-fuelled aerial battles. ‘You just can’t get a camera wide enough to see all of that,’ Grech-Smith explains. ‘I said to Emily that we need to be quite abstract with this because we’re never going to really appreciate what’s going on. I had artistic licence to embellish, and I featured more animation, some big wide shots that tilted up to the ceiling and zooms on certain sections.’ I remark that I hadn’t considered quite how many things he had to think about when directing these plays for cinemas. ‘That’s the level of detail we go to,’ he replies, ‘No one really appreciates just how much work goes in!’ 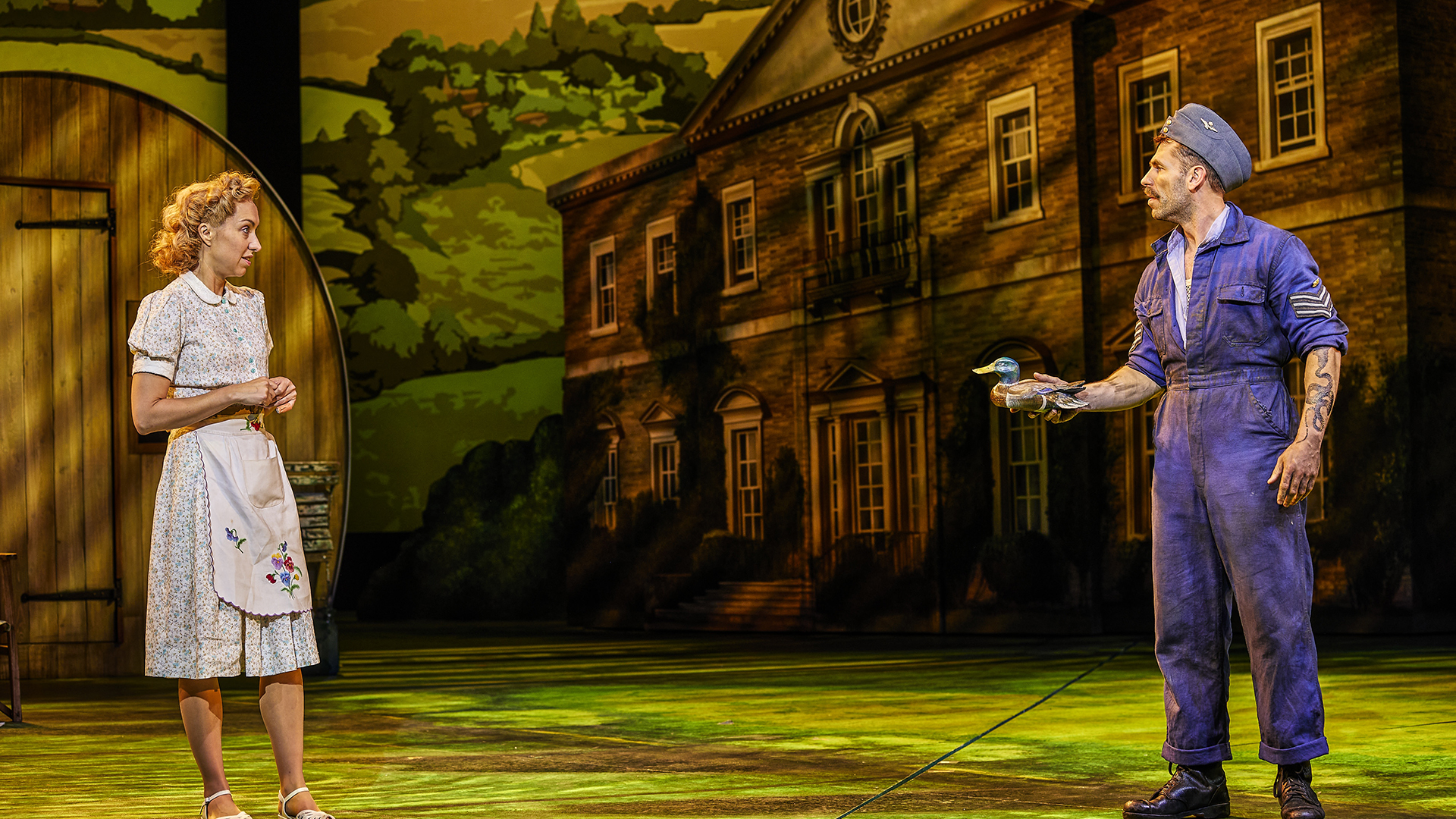 Each play presents its own unique challenges, but Grech-Smith is proud to be, as he describes it, ‘part of the machine that is NT Live’. Even though, in an ideal world, he doesn’t want you to notice all the effort he and his team put in.