To Be Or Not To Be: The Northman’s Nihilistic Take on Hamlet

The Northman is the type of film people lament isn’t made any more. It is a wholly distinct, big-budget work from director Robert Eggers, best known for feminist folk horror The Witch (2015) and trapping Robert Pattinson and Willem Dafoe in a maritime nightmare in The Lighthouse (2019). The one-time arthouse darling has now created an epic revenge tale based on the 10th-century Scandinavian legend of Prince Amleth (Alexander Skarsgård) seeking to avenge his murdered father and save his mother Queen Gudrún (Nicole Kidman). The huge scale of the film – which is packed with large action set pieces, sex and magic – never compromises Eggers’ distinct aesthetic, and results in an unadulterated masterpiece.

The artfully composed battles don’t shy away from the blood, dirt and misery of this world, or rely on plasticky fight sequences shot against brazen green screen. The Northman feels like a breath of fresh air, but the bones of the story are extremely familiar, since the legend of Amleth has been adapted into arguably the most famous play in human history, Shakespeare’s Hamlet. 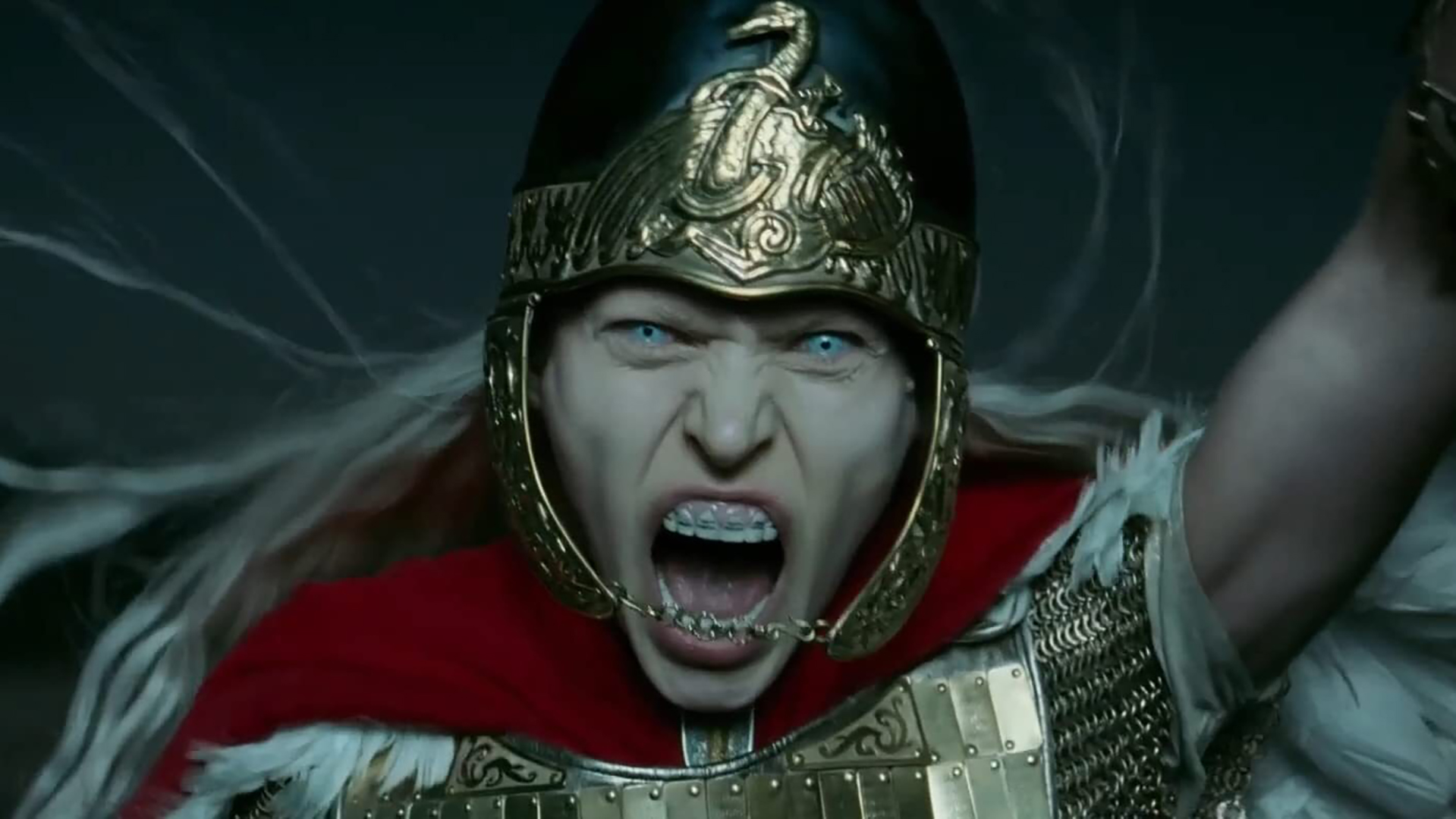 The disparity of moral universes in Eggers’ The Northman compared with Hamlet, and its subsequent adaptations, is stark. Amleth’s father, King Aurvandil the War Raven (Ethan Hawke), is not framed as having great virtue that differentiates him from his treacherous brother Fjölnir the Brotherless (Claes Bang). Prince Amleth, having escaped being murdered by his uncle, becomes a bloodthirsty mercenary and unrepentant killing machine, taking part in massacres in ‘The Land of Rus’, where Olga of the Birch Forest’s (Anya Taylor-Joy) village is ransacked, children are immolated and the adults are sold into slavery. Within the first act, Eggers establishes that this is a world without such binary concepts as good and evil. Even death itself is not always a strictly negative outcome: some virtually rush towards it in The Northman, deeming it far better to be hacked to pieces in battle than survive and ‘live the shameful life of a grey beard’. 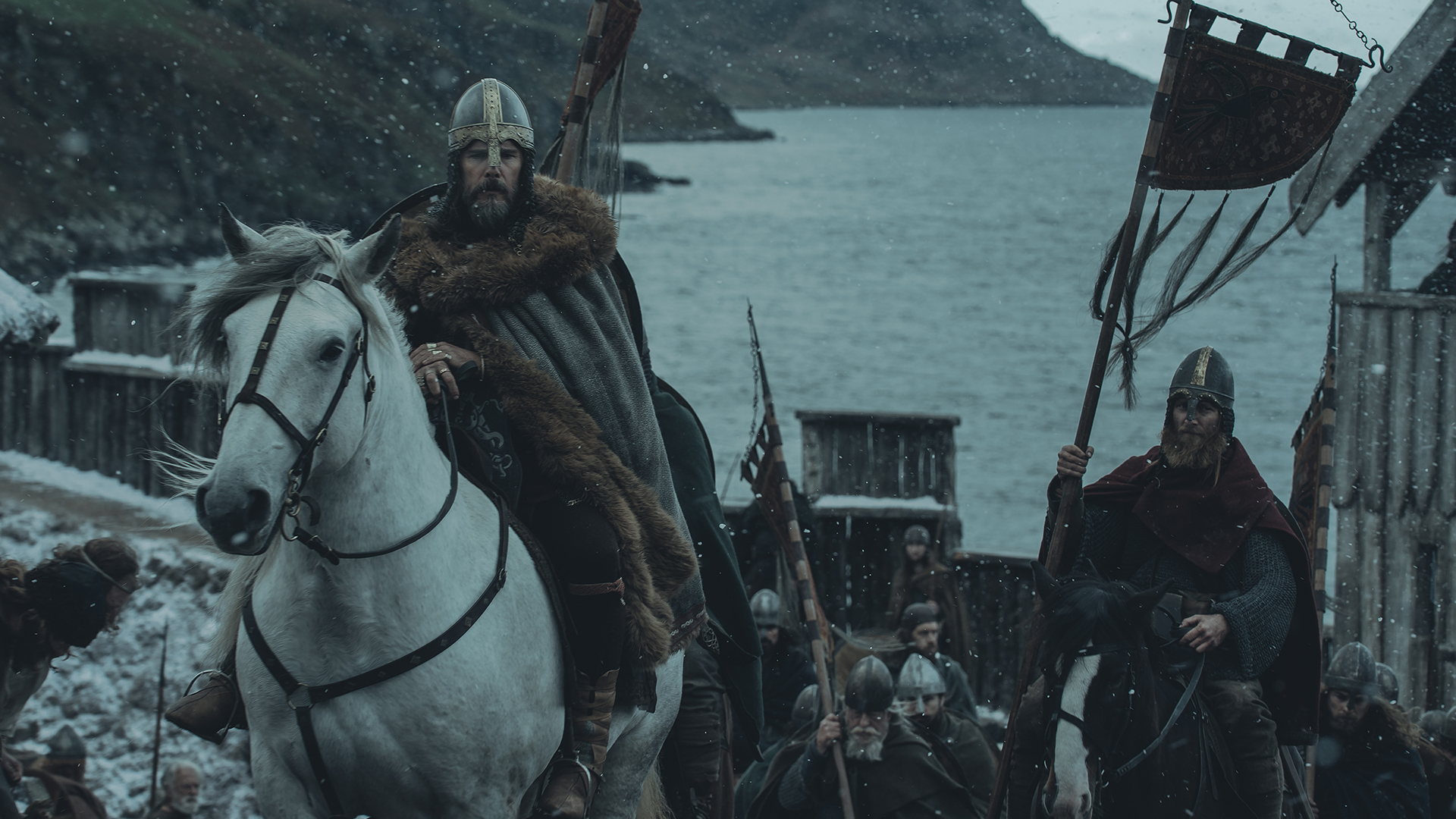 Eggers’ approach is true to the moral philosophy of the time of Amleth, where characters and even gods were complex, ethically impure beings, and fate took precedence over free will. By the time Shakespeare adapted Amleth to Hamlet at the turn of the 16th century, Judeo-Christian fixed concepts of morality had taken hold. Hamlet’s uncle Claudius is more nakedly villainous, and Hamlet himself is conflicted about his revenge, ethically torn about whether it is the right thing to do. His mother Gertrude’s motives have been debated over the centuries, but she holds a more passive position than the fearsome Queen Gudrún in The Northman, who rules over the Icelandic hellscape, wed to her former brother-in-law. 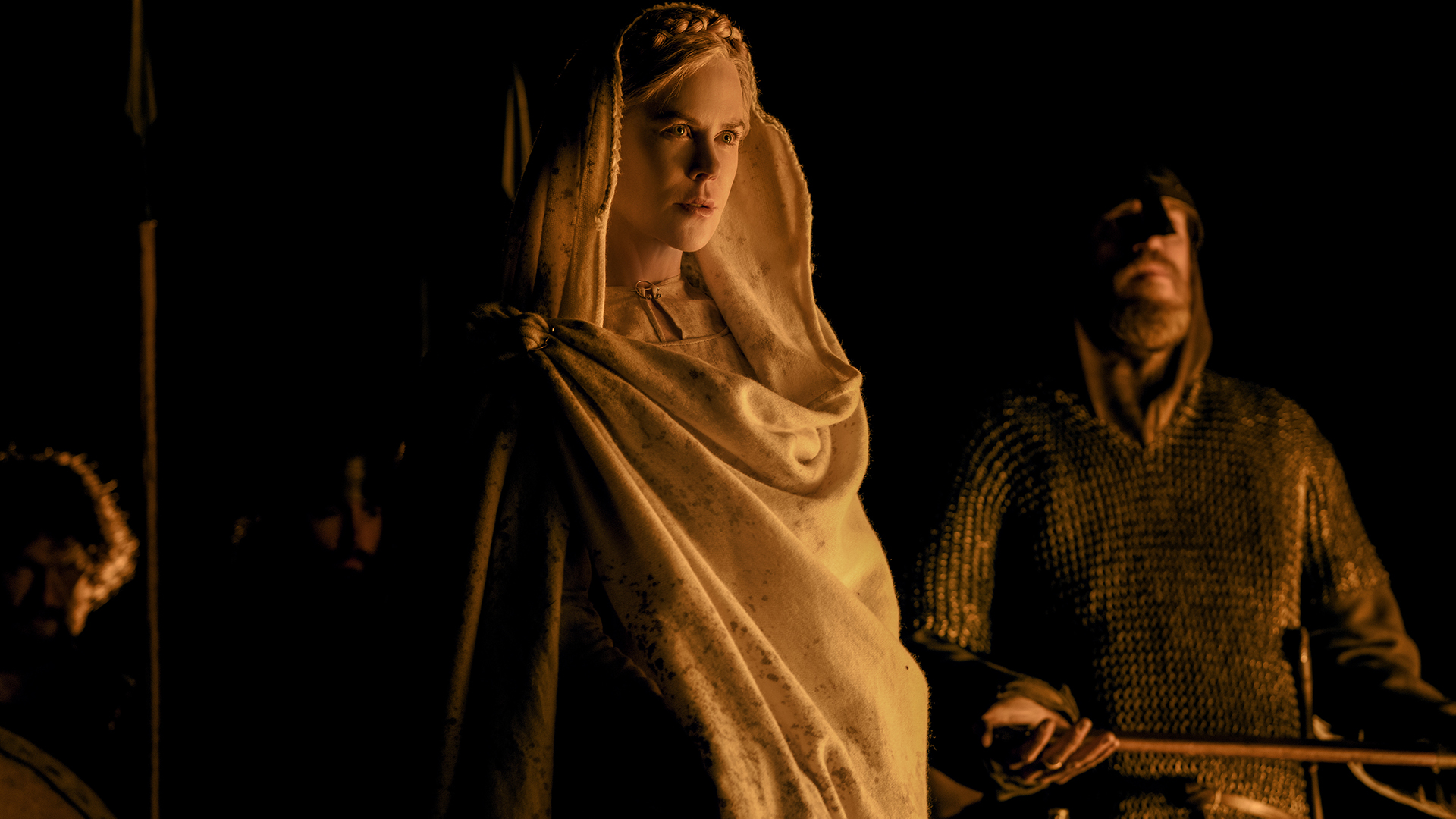 Hamlet has been adapted for the screen over 50 times, with directors including Akira Kurosawa, Tom Stoppard, Grigori Kozintsev and Kenneth Branagh all reinterpreting Shakespeare’s tragedy. The most seminal is Laurence Olivier’s Best Picture-winning 1948 version, in which he directed and starred. During World War II, Olivier had collaborated with the Ministry of Information to make films that would buoy the spirits of the British. They created That Hamilton Woman (1941) portraying the defeat of Napoleon; 49th Parallel (1941) and The Demi-Paradise (1943), a pair of jingoistic war dramas; and Henry V (1944), whose translation of the Bard reminded the troops of the valuable cultural legacy they were protecting. This was what sparked Olivier’s Hamlet, a piece that sought to celebrate the best of Britishness, from one of the nation’s finest actors. The film is a reasonably faithful adaptation of the text – even with the action slimmed down, and the exclusion of Rosencrantz and Guildenstern – but the moral puritanism of the World War II era can be seen. Gertrude is a more noble character, naïve to Claudius’ nefarious nature and willing to sacrifice herself for her son. Hamlet, for his part, is reluctant to violence in this adaptation, only succumbing to it when utterly forced, as Olivier’s voiceover narrating the opening credits tells us, ‘This is a tragedy of a man who could not make up his mind.’ 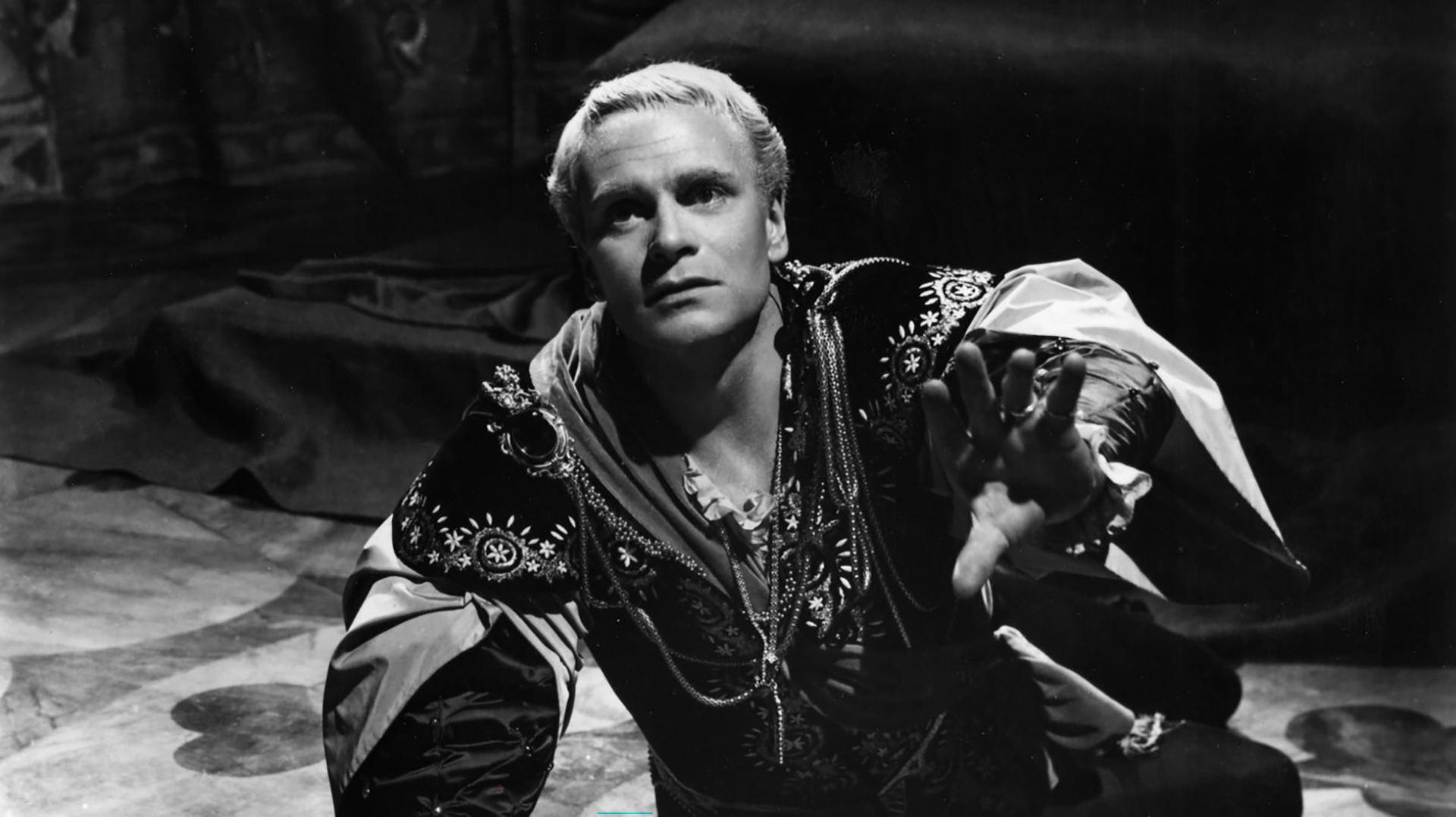 That focus on indecision – by the end of the 20th century and beyond – reinterpreted the Danish Prince’s tale as a mental-health story. Acclaimed turns on the stage from Mark Rylance (1991), Ben Whishaw (2004) and David Tennant (2008) reframed Hamlet’s struggles as the result of an internal malaise, a man crumbling under the weight of what surrounds him. It was also around then that the most widely seen adaptation of this story appeared, Disney’s The Lion King, the most watched film of 1994 and the seventh-highest-grossing film of all time. In it, the good and evil of these centuries-old characters meet their moral apex. King Mufasa (the anthropomorphised Aurvandil) is a benign leader of The Prideland, speaking in James Earl Jones’ commanding baritone. The King has a steadfast commitment to the circle of life, is a perfect father and nurturing husband to gentle Queen Sarabi (Gudrún in lioness form). Scar (Jeremy Irons’ deliciously performed Fjölnir) is spectacularly evil, only interested in power – ‘Be Prepared’, his song to rally the hyena troops, is filled with fascist imagery. Simba, our young Amleth, has no desire for revenge, only returning to The Prideland to help restore the kingdom. Simba is kept so heroic that he does not even kill Scar himself, instead leaving that to the group of hyenas, pushed to the point of starvation by Scar’s inept reign. 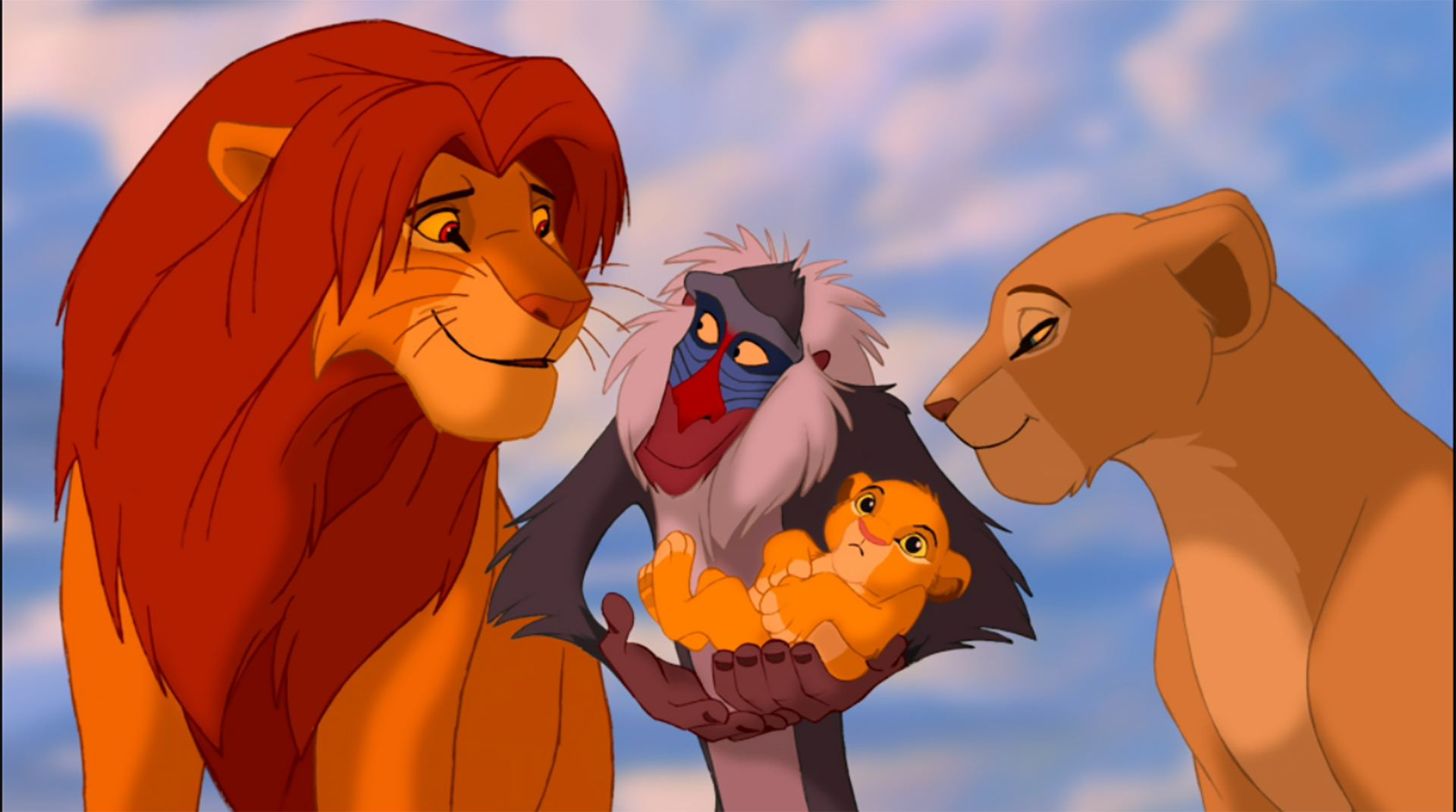 In the years since Amleth was transported to the plains of Africa, the moral puritanism of Disney has extended beyond its animated films into worlds of caped ubermenschen who fight power-hungry villains. Some of the discourse around cinema has followed the same route, stirring up debates over the ‘problematic’ nature of many film’s protagonists. It makes The Northman all the more exciting as a work of art, one with a comparative moral nihilism that refuses to assign our characters the prototypical virtues of heroism. Eggers’ film shows that, even if our ‘hero’ defeats his foe, the path is littered with blood and bones, and no one can ever live happily ever after.

WATCH THE NORTHMAN IN CINEMAS